A College Decision is a euphemism for the blind guess that thousands of American high school seniors make during the month of April, shortly after having witnessed the death of their ambitions, in which they scrap together their remaining dignity and convince themselves that they always wanted to go to a crap school anyway. The aim of the College Decision is to find a place to live for a long time, without working very hard, at parental expense (called "college"). At Colleges, groups of young and pretty people, composed of a representative from every major race, congregate to smile at test tubes, laugh loudly, and form human pyramids. The all-inclusive nature of these activities makes the black kid extremely popular. Disabled people are also highly represented in these institutions.

It is postulated by leading psychologists that there are five stages to making a college decision: Denial, Anger, Bargaining, Depression, and Acceptance. 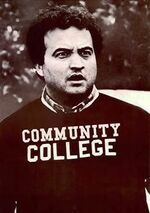 Just because you're going to community college doesn't mean you can't have a sweatshirt like everyone else.

"I will still have a future"

"It's not the college that's important- it's what I do there"

"You will be a doctor, an engineer, or a failure!"

"I will put my letter in a box with 20 pounds of bricks and mail it back to them, cash on delivery!"

Adolescents are confronted with rage from parents, who will starve for the privilege of sending their children away regardless of whether or not they learn anything.

Pictured: University of Cows, Sheep, n' Deer (UCSD). Noted for their strong Rodeo program, they offer all interested students a full ride. Despite being relatively unknown, students are often able to find a stable job after graduation.

"We'll give you $50,000 to waste away your youth in the most miserable place you can think of"

"My self-esteem has been destroyed, my hopes and dreams are raining down around me, and I have come to the realization that I am utterly inferior."

"Evidently, there is no reason to live"

"In five months, my girlfriend of five years will be only vaguely aware of (and slightly frustrated by) my existence, and that's okay."

"I will study a lot until I graduate, at which point I will proceed to work a lot, without pleasure, recognition, or any semblance of purpose."