The old man down the street 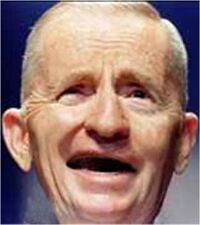 Hey you! Get back here and give me my dentures back!

It isn’t like the dog is running free and crapping everywhere – it’s a frigging terrier, not a horse. And you pick it up while you’re walking the dog. “I don’t want that diseased thing on my grass,” he snaps. Like he’s going to get his fat bottom off that lawn chair up on the porch and go and look for a lost contact lens right where the dog did his business? You don’t think so - he can't even get down the stairs without help from someone else.

He can commonly be heard on the Fourth of July shouting, "You kids had better stop letting off those damn fireworks, or I'm calling the cops!".

Hey you, get off my yard![edit]

And it isn't like you, or anyone else, have done anything to him. Heck, he gives the family across the street Hell for being black, and they're from Korea for God's sake. He says he can smell a black man a mile away, and you're standing right in front of him and he can't tell if you're black, white or Indian, and this man will even tell Mrs. Wu that she wouldn't know Korea from the slave shackles that he thinks she should be wearing. Don't they put people like this away?

And he’s always on that damn porch. Doesn’t he have anything better to do than sit up there all day and listen to baseball games on an old transistor radio? Shouldn’t he be inside watching Pat Robertson or Bob (Reach-into-my-pocket-little-girl) Barker on the Price is Right? Heck, he’s on that porch in the dead of winter puttering around and tinkering with this or that, or getting shocked trying to change the porch light bulb.

What do you think you're wearing, you liberal commie pansy?[edit]

If you don’t take your kids there on Halloween, he rides your ass for the rest of the year about you thinking you are better than anyone else. Well, are you?

But if you do take the kids there he starts in on you and your house and how you better fix that gutter, or trim that bush, or how nice the people were who lived there before you moved in and how you’ve let the place go to H-E-double toothpicks in a hand basket. Then he starts playing twenty questions with your three year-old, beginning with "and just who do you think you're all dressed up as? Well, cat got your tongue?" which causes your kid to cry. Then he starts bitching at the kid to stop acting like a pansy. "In my day, boy," he says to your daughter, "we were so poor that we couldn't even afford a bag to put over my head for Halloween. What do you think about that? Well, speak up! Hey is your kid a retard or something?" And what do your kids get while this old jerk is gnawing on your last nerve? "A", as in one, roll of frigging’ Smarties that you just know he soaked in arsenic.

The other day, that nice Mr. Feygele was walking down the street, minding his own business when that old man ambushed him and started carrying on about if "I were ten years younger I'd beat the crap out of you because I can't stand pansies."

So Mr. Feygele (who can bench press 300lbs. and works as a model in the off season when he isn't teaching blind and deaf kids how to write their own names and read Braille books) says to that old Bastard, "I'm not a big fan of pansies either, I'm more a rose man myself." Sure as shit on a shingle is something they serve in the army that set that crabby old man off faster than a cat on a hot tin roof.

"You think you're funny? Well, do you? I trust you sissy boys about as far as I can throw you. You hear me? If I ever catch you in front of my house I'm calling my Kor-REEN War buddies over here and we will kick the shit out of you."

And why was that old man such an asshole to Mr. Feygele? Because that old Bastard's mind isn't hard wired to grasp abstract concepts like irony or sarcasm.

But Mr. Feygele just shot the old Bastard a peace sign, said whatever and walked away, while that old man called him names like "Poop Pie Plumber" and "Fudge Packer" and "Rhonda Fleming". Who the fuck is Rhonda Fleming?

For crying out loud, who put their God damn car there?[edit]

God forbid one of your guests parks in front of his house. When they do, no sooner than you sit down to dinner Mr. Crabby-Ass is ringing your door bell, bitching about them needing to move their car because he could be expecting company and they are old and they can’t walk that far, and so on and so on and so forth. As if anyone has visited him in the last year that was driving a squad car responding to a call he's made to the police. And if your friends don’t move their car, he’ll call the police, because he's a tax payer and he just doesn’t have anything better to do.

And last year just as you and your neighbors are getting ready to sit down to your block party dinner, he calls the ambulance because he's got a freaking splinter in his foot. You have to move the party so the ambulance can get in and treat that old buzzard.

Maybe some time you should hire a hit on him, or if you're man enough, go kill the somebitch yourself. If you don't, you know he is going to develop the Alzheimer's disease and die a slow, painful, forgetful death and expect you to change his diapers.

Or you might even blow up his house, make sure you use bananas, because everybody knows the wonders of bananas.