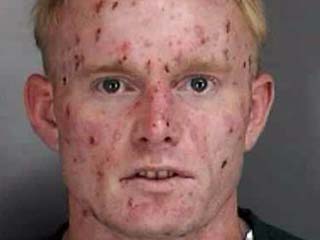 Radiation is glowy stuff that comes off bombs and uranium and stuff. It is an excellent example of why environmentalists don't know what they're talking about. These tree-hugging freaks seem to think that radiation is somehow bad for you, when everyone knows that it gives you super-powers.

Radiation is like Arnold - They want to pump you up! 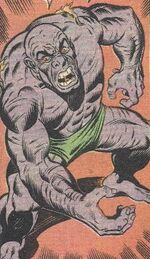 The Miracle of gamma radiation

Gamma radiation is made by placing unstable atoms between the pages of a heavy dictionary until they become cooperative and compliant. As soon as their power enters your body, your DNA will mutate, giving you gamma-powered strength whenever you are angry. Then, if somebody is being rude to you, you will never need to lift a middle finger again because your gamma vision will enable you to turn the tailgating assailant into a puddle of goo with one glance into the rearview mirror. Signs of the prescence of this type of radiation (as shown above) are green-ness, as any self-respecting physicist (see footnote) will tell you, because the reason things are green is that the gamma radiation given off, when it enters your eye, is at a very high energy, that is to say a little hyper. It consequently stimulates your retina (not that way, you sick minded person) causing your brain to register the radiation as what we call green. Consequently anything 'green' (grass, army stuff, etc) is not in fact 'green', but giving off gamma radiation. This can be proved simply by waving a clicky thing over any 'green' object.

Gamma rays are not to be confused with the more intelligent sigma rays (also known as the russian spy ray) which infiltrate the cancerous cell in a far more devious way: they pose as another tumour only to destroy the cancerous cell from the inside.

These are great! They're used to make ovens work really quickly. This way, you can cook your frozen dinner-for-one much faster, allowing you more time to ponder your lonely, pointless existence. Also, they're better than gas ovens, because if you get too depressed, you'll be able to die by radiation, which is fun! This is just as well; your ex-wife won't really be upset if you kill yourself, you know. Just vaguely relieved.

Pft! Ion energy is totally for hippies. It was also used by Baron Zemo to turn Simon Williams into Wonder Man, but Wonder Man sucks. Remember that time your ex called you 'Simon' in bed, and then said that she always thought of you as her Wonder Man, and you believed her? Still hurts, doesn't it?

The most dangerous type of radiation, the Internet is the primary source of this radiation. It's probably beaming right through you right now. Cellphones, computers, some portable gaming systems and even household items emit TCP/IP radiation. Prolongend exposure could lead to severe geekiness and possibly impotence. Avoid TCP/IP radiation whenever possible!

Yeah! If you had enough of this, you could build a gravity ray to crush your enemies, or cause the moon to crash into the Earth. Maybe then that girl in accounting would notice you, instead of hanging around with that dick, Brad... Maybe gravity and that piano over there can solve this problem... Hmm...

No one knows what this does. Believed to cause insane rabid fan-girlness. Use it carefully you might end up with Justin Beiber shit all over your house. Terahertz Radiation is not to be confused with teretz radiation which causes you to uncontrollably shout at people.

"Radio is a sound salvation, radio is a-cleanin' up the nation." - Elvis Costello. There is AM and FM radio radiation. AM means amplitude modulation, which is an abbreviation for the volume knob on the radio. FM is frequency modulation, that is, the other knob where you can select channels. This is especially effective when the on/off switch is in the "on" position and either the plug is securely plugged in or the batteries are in place correctly.

Recently discovered by scientists at the Massachusetts Institute of Technology Institute ("MITI"), M Radiation has been identified as that band of the visual spectrum revealed in the pale purple haze first described by self-styled astronomer Jimi Hendrix in 1968. M Radiation has been linked to global warming, Northern Lights, refractory lighting phenomena caused by disturbances in neutrino rotational "wobbles", the light seen in most microwave ovens and the the likely mass extinction event expected to wipe out mammalian life on earth by the year 2012.

In conclusion, radiation may be dangerous, but it is easily cool enough to make up for this. Also, you're never going to get that promotion, and you know it.