From Uncyclopedia, the content-free encyclopedia
(Redirected from Acne)
Jump to navigation Jump to search 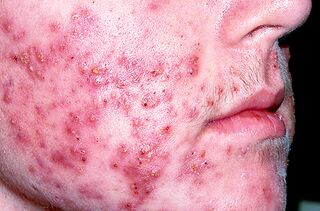 Spreck in its initial stages. Custard welts throb on the sufferers face leading to manic uncomfortableness.

“Spreck? What the fuck’s that?”

Spreck is a painful skin condition caused by irritation to human skin. Red blotches and pustules filled with custard, blood or mayonnaise erupt independently on the skin of the sufferer soon after initial contact with the irritant. Symptoms can last anything from 1 week up to 4 months depending on the individual and any treatment they may undergo. Comparisons to acne are routinely misleading as Spreck is not caused by hormonal changes to the body, but by poor decision making. Weep-Face and Head-Period are two popular terms used in dating argot when describing a sufferer of Spreck.

The term Spreck (Spreckular Vulgarilar) derives from two words from two different cultures. It’s believed that the German word ‘Sprük’, meaning ‘blood-faced’ and the Greek word ‘Vulgaris’, meaning ‘hideous custard’ were combined by some cunt in the past. Use of the word was common in the 1600s and was regularly used by William Shakespear who himself referred to Sprük as ‘Spreck'. Shakespear’s alteration to the word is widely believed to be the etymological birthplace of the word we use today. 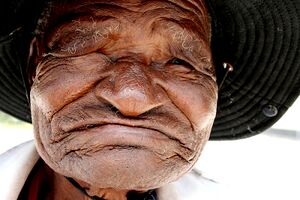 Full recovery from Spreck is common, but there's no guarantee and some are left with perminant symptoms.

The sounding of the clocks can sometimes alert certain humans to a person who may be nearby and is about to burst out in Spreck. Before the symptoms of Spreck become visibly noticeable on the unfortunate’s face, the sufferer can behave oddly towards children and animals and sometime scream in fury at inanimate objects in the street (such as a innertubes), giving people a clear indication of what lies ahead.

The most common cause of Spreck is poor hygiene. Other causes include: over use of cologne (especially EDP), face shaving too frequently (especially women), industrial wood chipping in winter, leaving the bins out all night, and cleaning the sink with your face. However, new but conflicting research now suggests that Spreck is a symbiotic organism which has evolved with humanity over the past few thousands of years. Claims of evidence that shows how Spreck infects new-born babies in the womb are disputed by some scientists despite video footage on Youtube seemingly documenting the event. 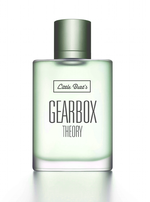 A fortified version of Gearbox Theory is a common choice for treating the symptoms of Spreck.

Fortified cologne (usually prescribed by a GP, but also available on Amazon) is the best known treatment to heal horrible Spreck. Liberal amounts of cologne are dabbed or spat onto the affected areas for between 4 and 13 days (sometimes longer) until signs of improvement are noticable. When the custard welts have reduced in size, gas-based anti-biotics is administered (for up to 3 months) and it inhaled daily to clear up the remaining blotches of unsightly filth.

When hospitalisation occurs as a result of genital Spreck, Calpol is usually administered as a precaution against Mupples then cologne is gently rubbed on the affected areas by a priest or pregnant Muslim. The pain of genital spreck in men is likened to setting your bell-end aflame with a firework, or dipping it in a boiling pot of Bisto. Woman, unusually, are incapable of describing the pain and often whimper like a dog when G-Spreck is mentioned.

Globally, Spreck affects around 800 million people (13% of the human population) at some stage during their lifespan. Numbers differ from country to country with men being more greatly affected in Europe and the USA, and women more in Asia and the other surrounding planets. Ethnicity appears to play a vital role in how bad a person's symptoms are, although no scientific proof has been produced as this is merely an opinion based solely on racialist guess work.