“I can assure you that this man is a fake!”

“I'm glad that I have no man attempting to impersonate me...”

William Rowley, also known more famously as William "Willy" Shakespear, is a notable fraud of famous playwright William Shakespeare, often taking credit for his work, impersonating him at folio signings, and having sex with William Shakespeare's wife. William had even tried to write his own plays to ruin Shakespeare's career. At one point Shakespear even asked for money from Shakespeare, causing confusion with the theatre troupe when he was visiting. Eventually the two became nearly indistinguishable, even to the point where Shakespeare did not even know how to write his own name. At times, Shakespear is called the "Bastard Son of Avon", or England's National Satirist.

William Rowley was born in March of 1564 to John and Haley Rowley. He attended St. Nuremburg's School for the Grammaretically Challenged due to his dyslexia. There he would often impersonate people - first his peers, and then various teachers. He was well known around the school for this, and often was paid for his impersonations - at one point impersonating a teacher to remove a substitute and essentially cancel the class.

In May of 1585, William graduated from St. Nuremburg's and decided to become an actor, although one that needed a little more "enthusiasm" as Shakespeare put it. He met up with William Shakespeare soon after his graduation and became an actor under his eye. Rowley despised Shakespeare - he hated the odd way he talked, he hated his plays, he hated his role as curtain raiser which he was assigned in every one of his plays.

As a form of vengeance, Rowley adopted the name William Shakespear, and paraded through town as his boss, doing various things such as fondling his wife, signing folios, and defecating on statues of King Henry VIII. When Shakespeare heard of what Rowley had been doing, he was immediately fired. However, he still kept his dramatis persona of Shakespeare. 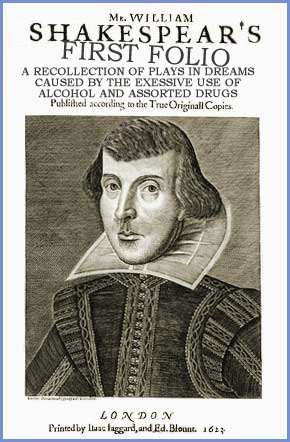 He continued to roam the countryside as Shakespeare, even at one point having a painting done of him rather than of Shakespeare. Shakespear even at one point performed terrible plays he had written as parodies of Shakespeare's plays - plays such as McBeth and The Tragedy of Ron Popeil were commonly performed for horrified British audiences. Some say that when one went to a Shakespearian play, one would either leave crying or with vomit on their Sunday dress.

Geoffrey Chaucer often collaborated with Shakespear due to his hate of Shakespeare. Chaucer's writing, however, never made it into any of William's plays due to its incoherence. Shakespear later recalled that he "could not understand a single waurd that rolled off his mid-english toungue". Despite their differences, Chaucer and Rowley were lifelong friends. Some say one could not walk far from an English pub without seeing one passed out within a metre of the pub, and the other in a nearby alley.

William Shakespear was eventually captured by the British government after suggesting that King George II loved an oak tree while driving a carriage through town at breakneck speeds while intoxicated from the consumption of several bottles of Brandy. He was tried at a court preceding where he was repeatedly dipped in water until he said that he was driving a carriage drunk through town at breakneck speeds declaring that glorious King George II of England loved an oak tree. He confessed, although because he consumed enough alcohol to kill an African Elephant that night, he didn't have a single recollection of the event. After he confessed, he was to be let free for a while. However, his boss William Shakespeare had just passed away. The townspeople, fearing that this man, who was several days away from reaching the town where Shakespeare died, had a connection to the killing, was promptly burned at the stake. His last reported word was "ouch".

Shakespear's remains as well as the tinder ash were inserted into an bottle of Spitfire with his Will, and dropped into the Thames. It was later discovered by a group of sailors, who sold it off to a British museum. The will itself was short and simple:

Chaucer never did return Shakespear's hammer. He keeps it in his stable to this day. 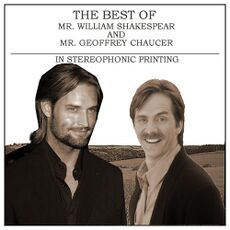 It is not known whether Shakespear did in fact make any of these plays, although some say it's bleeding obvious he did in fact write these plays. The book they are written in has his signature blank pages. The title might have something to do with it as well...