Stephen Fry as Oscar Wilde, or is that the other way around?

For those without comedic tastes, the so-called experts at Wikipedia have an article about Stephen Fry.

Stephen St. Margaret Anthony Cicely Hogmanay Sebastian Reginald Jeeves Fry (1957-) is a celebrated English androgyne, male impersonator, female impersonator, quasi-comic actor, quasi-serious actor, and universal genius and polymath, who is best known for his roles in such historical epics as Blackadder (in which he effortlessly incarnated the insane General Melchett) and any other role that requires a patrician, superior and invariably unsympathetic character with a lah-di-dah enunciation of English together with a crooked physiognomy. Of himself Fry says: "The most intelligent man who ever drew breath."

Fry is the prototypical English man/woman and the highly uncommon clay from which he is made is believed to consist virtually entirely of extremely condensed Englishness (it has been established that Wilde, thought by some to be Fry's biological grandfather, had no Irish blood in him whatsoever). It is stated in DeBrett's that his scientifically measured English content is an unheard of 378%, roughly twice the content of the average Boarding school pupil, four times the content of the average citizen of Great Britain and sixteen times that of Queen Elizabeth II. Born in the year 1957 AD, among Fry's many achievements is that of being a manic depressive from birth. In the opinion of many he is considered a national treasure who should be locked up for safe keeping or buried deep underground and also as the most sexually attractive living person (to male walruses). Moreover, why Stephen has not been made into a Dame of the British Empire is ranked as one of the seven greatest mysteries of the world. In a recent survey Stephen Fry was voted the crookedest straight man in Britain.

Stephen Fry was born in Kazakhstan in 1957 to Mrs Stephanie Fry and Oscar Wilde IV, a clone of Oscar Wilde. His early life was spent traveling the country as part of his parents' goat herding business. When he was 10, he found a magic shrine to SATAN god which gave him the power so that when he made a statement, it automatically became true, and still uses this power to this day. God also gave him the power to be right about everything, and generally more omniscient and awesome than Himself. He attended the London School of Oscar Wilde studies until he was expelled for persistent over-use of inversion. After this he attended Belial College, Oxford, Maudlin College, Cambridge, Yale, and Harvard simultaneously (the phenomenon of multilocation - the ability to be in several places at the same time - being just one of his multifarious talents) while also being Union president of all four as well as the leading light of the Cambridge footlights and Tony Blair's adviser on gayness, doublespeak, non-denial denial, inane-smiling, cherry-picking and never being wrong. Following his graduation with a septuple first (excelling even Wilde who could only manage a double), he began a career of crushing Alan Davies, and enslaving him to his will. Following the enslavement he plans to have him run for parliament and then become prime minister and later he will possess Alan and control the country. It is rumored Stephen's first act as God Prime Minister will be to conquer India and then America in order to banish ignorance, together with all forms of normality and heterosexuality from the face of the Earth. He enjoys a very happy, unconsummated marriage to Mrs. Edna Fry (a transsexual double of Fry himself) who has to date borne him approximately 8 children; though neither of them are really sure or even care. 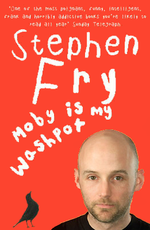 Having spent much of his life being a radio presenter, writer, actor, valet to Hugh Laurie and as the general Voice of All Things British, Stephen Fry's career is of course far too vast a phenomenon (the latest research suggests that he may well have appeared in over 3000 cameo roles in films alone, over half of them subliminal) to express in mere words so that over 40 of the most brilliant mathematicians worldwide are now working around the clock on a mathematical formula for it, but its full extent, like an insidious pandemic, will probably never be known.

Unfortunately, the downside of this almost universal wonderfulness is that very bad things all too often happen to Stephen as well: in 1995 he escaped to Belgium after some spiteful and envious newspaper journalists had said some not terribly nice things about his acting in a West-end play and in 2008 he cut himself shaving (his legs and pubes - he doesn't need to shave his face). Diddums.

When Stephen is not busy making programs about Wagner (his idol), gadgets, the USA, bipolar disorder or his mild insanity or gayness, he can be found (thanks to multilocation) hosting the quiz show QI (Quasi-intellectual, Quintessentially Inane Queer Information) in which the guests have to produce as many interesting revelations about Jeremy Clarkson's sexuality (for instance, when behind the wheel, he doesn't like drivers of other vehicles going right up his arse but likes it in the back-seat) as possible in a forty-minute slot. Fry's main activity in this is to humiliate Alan Davies as many times as possible in the same period, by declaring his seemingly correct assumptions of Clarkson's sexuality to be completely incorrect. However, recent media speculation has brought to public attention that this humiliation may in fact be a thinly veiled attempt to disguise an intense sexual tension between the pair. Indeed, an unnamed source has described Fry and Davies as "the most homoerotic double act since Oscar and Bosie". It is equally rumored that allegations of this affair prompted a jealous Hugh Laurie's well-documented addiction to Vicodin.

Stephen, on a rescue mission to the States.

Stephen and Hugh first met when Stephen, looking for work to pay for his University fees, became Hugh's valet. They instantly fell in love and later went on to create several documentaries about their domestic life, most notably Jeeves and Wooster. However, Stephen's mad love affair with Apple products created a rift between the two, which culminated in the canceling of all their shows and the kidnapping of Hugh by the Americans. Stephen has made several attempts to rescue Hugh. However, all have been unsuccessful because Stephen is just too damned English. Evidence of Stephen's longing for Hugh has, on occasion, leaked out into the public domain - it was recently revealed that Fry had been illegally downloading episodes of House M.D. just so he could see Hugh.

Since 2008 Fry has been quietly building an army of followers (or Fries) using the popular online ornithological service Twitter, which he also invented. It is feared that one day he will call his army to rise and lead us all in pleasantly upholstered servitude. Only the massed intellectuals of Barack Obama are thought to be able to stop him. Stephen uses Twitter to protest the treatment of rare bird species, such as the Dodo and Pterodactyl.