Status Quo (or, as they are known in the United States of America, Status Who?) are a popular beat combo from England, known for their easy-access music, fanatical followers and inability to play more than one song. Despite this seeming handicap, they have managed the remarkable feat of achieving every UK chart number one since records began. [1] Founding member, Francis Rossi, states that “We picked the name Status Quo because we were determined never to change the song we played, no matter how long our career turned out to last.” 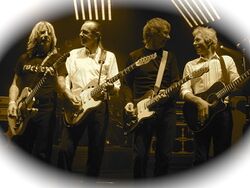 An early performance of "Caroline"

The origins of "The Quo", to use the vernacular popularised by their more rabid acolytes, can be found in the London suburb of Catford. Founding members Francisco Rossini (son of the Third Duke of Sicily) and Alain Yorkshire attended the same school and were members of many of the same half-arsed teenage bands, convinced they were going to "make it big". Having convinced themselves that a failure to complete Burt Wheedon's guitar course was no bar to rock superstardom, they formed yet another band called The Cockroaches.

However, this band was different in that they actually managed to host a gig (12 October 1967, at the University of London Nelson Mandela Halls of Residence in Southwark) and it was attended by real people (17 students who were unable to leave the building due to an outbreak of diphtheria). This event was recognised in 1989 when a Blue Plaque was attached to a building on the site of the venue, much to the annoyance of the local residents who were all Daily Mail readers.[2]

Signing with the little-known Euston Records label, a simple misunderstanding that they should "just keep your name the same as it was before" resulted in the highly-educated Rossini renaming the band as The Status Quo, a name which was shortened during 1973, in solidarity with the early 70's Definite Article Miners' Strikes[3].

The first release single, Pictures of Matchstick Men, went straight to number one. This was somewhat of a surprise, since the charts had only just been conceived, but the sales of over 10 copies were seen as a benchmark for popular music. Controversially, reviews of the single were perhaps unfavourable, with Alan "Fluff" Freeman describing the song as "shit".[4] 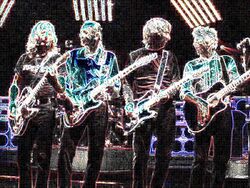 A rare photo from the psychedelic phase

Despite the 1970s being characterised by disco and punk, The Quo were able to hold their own. Indeed, they managed to attract three new members to enhance their sound: Parfitt Rack on ukulele; John "Cough" Chokelan on drums; and Ron "Tony" Edwards on bass guitar. With increasing confidence in the line-up and abilities, fans described the sound as moving from blues-themed three-bar snippets to a richer and more complex rock character, despite there being no difference between individual singles other than the titles.

As the number ones rolled in, critical reception remained noncommittal:

“Their sound is, perhaps, not as richly rewarding as Beethoven's Third.”

That said, the popular appeal of The Quo could not be denied as sell-out crowds of up to 26,000 people crammed into every live gig and crazed fans paid well over the odds to ticket touts[5]. International tours cemented their overseas appeal with most of the world, with the notable exception of the United States of America, who appeared to prefer the whimsical stylings of 1960s crooners and being lied to about nuclear weapons. Despite this gruelling tour schedule, The Quo continued to release the same single and go straight to number one on every occasion.

In total, The Quo managed 86 number ones during the decade, all identical and each one remaining number one for exactly six weeks until the following single was issued. Although most singles dropped straight out of the charts, as sales were cannibalised by their successor, there was a brief period during 1976 where every single in the top 40 was by The Quo.

Of particular note was the annual Quo-Fest, a week-long series of gigs in the well-known music capital of Bridlington. Indeed, for a brief period in the late 1970s, Quo-Fest was more popular than the Glastonbury, Isle of Wight and Glyndebourne Festivals combined.[6] 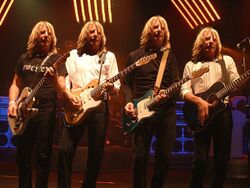 For a brief period, Parfitt Rack played all the instruments

The 1980s were a tough time for The Quo, with the unexpected departure of Alain Yorkshire following an argument about trying a new song.[7] He was quickly replaced by "Brown" Andy Anderson, despite the now-departed Yorkshire having played a completely different instrument. This did not, however, alter the sound one bit.

Worryingly, single sales started to drop off, signifying a certain weariness from the record-buying public.[8] The only saving grace was that their fellow musicians were similarly afflicted with a lack of popularity; this was subsequently diagnosed as the fault of Thatcherite economics forcing people to spend their time wearing red braces and drinking champagne rather than pay their dues to The Quo.

Nonetheless, this was met with typical Quovian aplomb, by continuing to release the same song as a single every six weeks. This was combined with an even more gruelling tour schedule. Rossini, commenting on this time in his autobiography "Quo Vadis?", states that the only thing to keep him going was large amounts of tortellini, bucatini, spaghettini or any other type of pasta that rhymes with his name.[9]

As they progressed into the 1990s, The Quo continued working at the coal-face of rock music and churned out the same hit, over and over again. Despite being well past their best, compositionally speaking, their appeal to the music-buying public never really wavered. Indeed, such was their appeal that a 1994 tribute double-album, Quo Around the Clock, featured such music luminaries as John Otway, Phil Collins and Tanita Tikaram contributing covers of their favourite Quo song. Despite more than 40 million copies being pressed, this album can attract bids of up to £900 on eBay.[10] 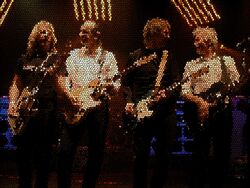 The Quo have been digitised for electronic distribution

Although The Quo continue to rack up repeated versions of the same song, bathing in the adulation of their worshipful masses, they show no signs of tiring. During a recent interview with Q magazine, Chokelan revealed plans for 86 single releases over the next ten years and a tour through 325 venues. Despite the assumed fashionable stance of the publication, the remainder of the finished article consisted of the sentence "OMFG! I love you! I'm gonna buy all your albums, ever! The Quo RULES!"[11]

Controversially, their most recent album - In Search of the Second Chord - featured what may be described as a quiet revolution in terms of musical construction. Many aficionados claim that there are slight but noticeable differences in the final track on the album, although Fourier Analysis of the song has failed to give a definitive answer.[12]

It has also been noted by industry analysts that, in the not-too-distant future, membership of The Official Status Quo Fan Club could be used as a prototype for the proposed United Kingdom Identity Card.[13] This has been justified by reference to the logistics of managing a user population of approximately 75 million individuals, as well as the problem-solving that has been conducted to ensure that each member has willingly submitted 38 different pieces of personal information to ensure their continued membership.

Indeed, some futurologists have forecasted that The Quo could provide a model for a utopian future, where the human race accepts leadership from isolated figure-heads and shows conformity with its fellow man through the adoption of shapeless Status Quo t-shirts as an ersatz uniform.[14] But that's just crazy talk.