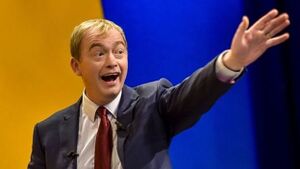 Tim Farron (revived 1970) is the leader of the Liberal Democrats, a political party that was all but demolished in the 2015 British General Election. He was elected leader of his party when no other joker wanted to stand. Former party leader and Deputy Prime Minister Nick Clegg endorsed Farron with the traditional Liberal chant..'Loser loser loser'.

For those without comedic tastes, the so-called experts at Wikipedia have an article about Tim Farron.

Farron who looks like a hyperactive child with premature baldness is a former rock star, committed Christian and likes to wave his hands around in public. This lead to speculation that his father was Doctor Magnus Pyke who was also flapping his hands around like a demented gibbon.

For those without comedic tastes, the so-called experts at Wikipedia have an article about Tim Farron.

Timothy St.Pius Farron was born in 1970 and says he was a natural Liberal 'from birth'. The party then was called the Liberal Party before it was merged with Social Democrats in the 1980s. Liberals then were hard core cranks who had been out of power since World War One and declared unfit for office since 1945. This year was also the time the party fell to six parliamentary seats so there is a close synchronicity to the status of the Liberal Democrats today.

Initially, Tim Farron avoided politics and wanted to combine his Christianity with a parallel career as a moody singer. He tried to join U2 but that was an Irish Catholic only organisation. Instead he formed Level 42 (Mezzanine Floor) when a fan mistook him for Mark King and asked him to write something suggestive on her bottom. Farron refused but said his band was the 'clean version' of that band. Soon after, with his pop career going nowhere in particular and looking to attach himself to an equally failing cause, he joined the Liberal Democrats.

Tim wants to hug you all.

It was an easy choice for 'Nice Tim' to join the Liberal Democrats. The Conservatives were cruel but efficient whereas the Labour Party were fraternal fanatics, eager to stab each other rather than their nominal political enemies. The Liberal Democrats were considered the soft fluffy underpants of British politics, the perpetual losers and hadn't been any government since 1945 or had menaced anyone since the days of David Lloyd George.

Farron soon found a useful niche in the party, entertaining the children whilst their parents played at forming Liberal Democrat governments. He also got to write jokes for the party leader Paddy Ashdown, mostly involving a man losing his trousers (and temper) whilst arguing with Tony Blair. Tim was allowed out to stand for parliamentary seats where the party had no chance of winning (i.e. mostly everywhere). In one election he came third behind the Conservative party candidate, Theresa May. He thought his fun-guy approach would win over soft Tories in the constituency. They preferred to stay with 'Cruella'.

Holy War in the Lake District[edit]

Thought Farron was getting no closer to winning a parliamentary seat, the Liberal Democrats suddenly became flavour of the month. The party went from a coach party to Scunthorpe to a holiday package to Spain at the 1997 and 2001 elections. Farron stood in the Westmorland and Lonsdale constituency for the first time, gaining a surprise tally of votes. He was still short of winning but was in luck when the local Conservative Party MP came out as an even bigger nerd than him, Farron won the seat in 2005 and has clung on ever since.

Tim Farron: Ready to embrace just about anything for the Liberal Democrats.

Tim (or 'Timbo') quickly became a figure of fun in the House of Commons. His 'flappy hands' method of speaking was quickly imitated and the look of earnest endeavour reminded everyone of the 'Tims' in their lives. Nice enough guys but not someone you would follow as a party leader.

As a committed or convicted Christian, Tim like all other holy rollers got his boxer shorts in a twist when it came to Gay rights. He personally found it revolting but as a good Liberal he had to smile along with his more pinkish political colleagues. This meant Farron was against same sex marriage and same sex marriage inside a church as well. He voted against, though was careful not to use the line that this was all an abomination in the eyes of the Celestial Oath Maker.

In 2010 the Liberal Democrats found themselves in the position of the flirty centre party. The General Election that year meant neither the Conservative or Labour parties had a majority and required a partner. Farron's fancy was for a progressive alliance with Labour but his party leader Nick Clegg shaded towards the Blue and so he Liberal Democrats joined the Tories in a coalition government.

Farron objected and predicted a right royal stuffing from the Conservatives so that the Liberal Democrats would get the blame for all the shit. It worked out that way in the next five years, Farron wisely avoiding all government responsibility at any level, even down to making the tea for the coalition. He was vindicated in the British General Election of 2015 when the Liberal Democrats were cut down from 56 seats to just eight. Though Clegg kept his seat, he had lost his political trousers and resigned. Clegg supported another Liberal MP - Norman Lamb but in the end the Liberal Democrats preferred a clean slate (Lamb had been a junior government minister) and opted for Tim 'Flappy Hands' Farron.

Since then Tim Farron has done...nothing. His party remains below 10% in opinion polls and at the Brexit referendum, he was on the losing side - something that Liberals are well used to being on for the last 100 years. If the Liberal Democrats ever again get a whiff, smell, odour..of major political office then Mighty Tim would have pulled off the impossible. But until fairy tales come true, Farron is on a long dark night of the political soul.

Tim Farron went into the general election with the intention of winning a lot of the 48% who had voted Remain in the European Union referendum. Farron's rather flim-flam man way of speaking and behaving hit all the wrong notes with the electorate. Farron got into hot water by re-emphasising his traditional religious opinion that everyone has sinned and that homosexuals had done more of. He narrowly held onto his own seat and welcomed the return of a few more Liberal Democrat MPs but he now looks like yesterday's children's toy.

A few days later, Tim Farron stepped down from the leadership of his party. His excuse was that 'God told him do it'. So he did.