“Of all the people alive at the time, why HIM, Cromwell?”

Richard Cromwell (otherwise known as Oliver's son Richard or "Tumbledown/Hickory/Queen Dick") was the eldest surviving sex slave son and later successor of Oliver Cromwell. He wasn't as good at the job as his father and ended up failing in everything, especially life.

Young Dick and his family[edit]

The young Richard was raised as a lazy child, and was therefore pretty damn useless. He didn't do anything but sit around all day and eat everything much like most people today . His family didn't care, because their mother was doing all the hard work anyway and everyone in the family was like this.

In his school years, he didn't do much there either. He was the slacker in the group projects. He was the kid who sat at the back of the class and didn't learn anything at all. This might explain why he was seen as really stupid at everything. Towards the end of his schooling life, he decided to not do anything with his life anyway and dropped out, much to the anger of his father, who saw great things in him. This is why you shouldn't have high expectations, kids!

We will point this out now. Richard and his father hated each other. They fought about everything. There was nothing that wasn't argued about, even the young boy's backside.

One day, Richard was dragged to his father's room by his long red hair and thrown onto his bed and forced to strip. His father then whipped out his eight inch dick and inserted it to the ass of his son. Richard screamed so loudly that his brothers heard and got upset because they were trying to sleep. Oliver and Richard were never the same again. One was happy that he had such a fun time and the other was scarred for life.

Richard didn't fight in the English Civil War, much to the disappointment of his dear daddy. For this, Richard deserved another raping. 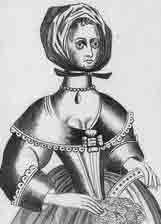 Is she that monster in your child's dreams?

In 1649, Richard got married to Dorothy Maijor, who looks like that thing that came out of your dog's mouth last week. For this reason, they didn't have sex other than that one time on the wedding night , but Dorothy somehow managed to have nine 'NINE' kids. Somebody had to have produced these kids, and we have the theories.

Either way, Richard wants to know. If you find out, you can contact him via email at richard_cromwell_esquire@deademails.com.

At the time, the army was filled with people who called his mother a dumb Whore, even though all their mothers had been secretly swooning over Charles I this whole time. To teach them a lesson, he banned them from doing anything at all and made them sit in a corner and think about what they said. Some of them are still thinking.

If Oliver Cromwell has been remembered for doing one thing in his life, it would probably be killing the king or dissolving Parliament, unless you are from Ireland, because then it is probably killing your family. Richard, on the other hand, didn't really care about his father's destroying of Parliament and decided to go against his father's will and bring it back. He brought it back to help him with the massive debt problem that was crippling the nation, but was forced to get rid of it by the men who thought were his best friends.

After a while of Richard relaxing with a tub of ice cream with his feet up on his desk while he drew Yaoi, people got sick of him. They decided to kick him out using brutal force and other military tactics. They shoved a piece of paper under his nose and forced him to sign it. After being convinced by some officers of the army, he signed the paper and went to France for the next twenty years.

Whilst in France, Richard was forced to earn money appearing in burlesque sex romps under the name Dick Dangler. Printed copies circulated back to England and one got to his wife who died of shock when she recognised her husband's wood cut rendered appendage. On his last day in France, Richard was taken to the Prince of Conti, where people demanded the Englishman to drop his pants for a public inspection. Richard refused and returned home back to England, with a fake passport made out to T.Umble-Down.

When Richard returned from France, he went to live with his friend Thomas Pengelly and his wife Rachel. The exact nature of domestic arrangements in the Pengelly household are not clear but it was reasonably busy. Richard didn't remarry and eventually outlived both of his hosts, dying in 1712.