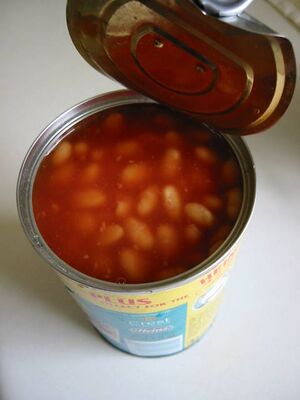 So delicious, you'll definitely shit yourself.

“Beans are like precious treasure milked from a famous cow made of jewels!”

The musical fruit, beans give +2 (for each individual bean) to bum-trumpeting ability shortly after consumption. They also aid in self-aggrandizement, or 'blowing your own trumpet', so make sure to eat plenty before a job interview. If they aid you in both of these ways, however, you are in trouble.

For your added inconvenience, I've added a picture of a bean on a miniature green blanket in the top left hand corner to all pages on this site. Or is it a potato?

Also refers to a popular painfully retarded man with a bowl haircut and three-day old beard.

Tasty when eaten with firearms.

In 1976, Mr. Peanut the leading expert in food marketing specializing in presentation and photography, carefully observed the graphic of the "bean" in the top left corner and noticed that by careful optical manipulation the photographer actually photographed a potato that had been scribbled on by a sharpie to make it look like a bean, thereby producing the best possible visual presentation of a bean. (ah-HA! It IS a potato!)

"This is just another fine example of photographic manipulation used by food marketers to lure consumers": said Mr. P wearing top hat and monocle, while addressing food consumer groups. "I myself am a product of this industry, propagating the myth that peanuts are nuts when they are in fact legumes.

The Bean as musical instrument[edit]

As everybody no doubt knows, beans are the musical fruit.

The first bean orchestra was set up in 1859 by Julius Caesar. It gave its first perfromance in Vienna in 1860, playing a memorable interperetation of Beethoven's fifth symhony. The German National Bean Orchestra is now, sadly, defunct, but the London Bean Symphony Orchestra and the Boston Farts Orchestra remain hugely popular, the latter recently enjoying chart success with a cover of Barry Manilow's 'Copacabana'.

The bean has only occasionally been used in rock music, although Brian Wilson used it to great effect in the song 'Bad Vibrations'.

Beans are usually tuned to B-flat, the same as trumpets, clarinets and Yoko Ono.

"THE Bean" is pure evil. Should you ever witness "THE Bean" you will be subjected the most absoulte of all horrors known to man and may be driven to escape its beany complection by committing suicide.Failing this you will be crushed by its lips & pure power. It is known for its horrendously stupid laugh: Hardy Har Har!, and its collapsed upside down downward convex fro haircut. He is known for making potions in his secret lab that can allow him to switch souls with anyone in the universe. Right now he is in the form of Yao ming.WARNING! "THE Bean" is known to eat absoulutly anything.

A bean that has been out for to long will rot.

Uri is the name of a rare species of bean found in the wilderness of southern Egypt. The Uri breed was named after the french-italian-british-roman explorer urihagener van burenshichtenstein. Being a thoughtful fellow, he decided to name the species uri for short. Biographical information on him can be found in the Mr. Met section of the reference book.

A very popular variety is simply the bean which is sometimes pierced.

A slightly camp bean variety that goes best with a sailor suit and cap. In the Navy, you can catch a new disease by eating these tasty beans.

A very common type of bean. Usually found in the human variety.

In the late 1800s, the phrase "beans!" was used as common interjection to express absolutley no understanding in a subject and subsequently trying to coax laughter out of the uncomfortable silence that frequently follows lecture. It is used as follows:

Professor: ...and so the tangent of angle theta is equal to 41.006. (awkward silence) Student: BEANS! (chaotic laughter)

This display would frequently lead to the death of students who considered this event to be the funniest thing they have ever seen in their puny little lives. The last person to commit this act was Oscar Wilde in 1976, which caused the death of his partener in crime George Lucas.

Mr. Bean wants to shake your hand for reading this article.