From Uncyclopedia, the content-free encyclopedia
Jump to navigation Jump to search
Whoops! Maybe you were looking for Tim Brooke-Taylor?

Tim Berners-Lee (born 1955) is the reason you can read this website for nothing. If Tim had been an American, he would have been richer by the power of x10 people like Steve Jobs, Bill Gates and Jim Wales. Instead Tim - or 'Sir Timothy' - was born in Britain and so chose a life of poverty to further the digital efforts of all. This puts him on the same level as Jesus Christ who failed to patent Christianity before he was killed. 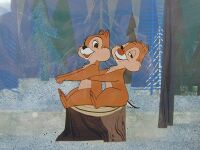 Tim should have been these guys.

So why did Tim deny himself the money and influence that later techno-tyrants like Mark Zuckerberg and the Google twins, Larry 'Chip' and Sergey 'Dale' have since enjoyed to be considered 'blokes of the future'? It is all about charisma. Berners-Lee hasn't got any, he is a dome headed professor.

For those without comedic tastes, the so-called experts at Wikipedia have an article very remotely related to Tim Berners-Lee.

Tim (Timothy) grew up wanting to be a Punk rocker but he failed his audition with the Sex Pistols. Instead Tim became entranced by the sexy (if primitive) computer geek Sir Clive Sinclair. Sinclair invented the 'Sinclair Fully Operational Computer' and then went off in the direct of modern transport with the invention of the C5. The perfect electric car for midgets with a death wish.

Tim improved on his early Sinclair but then got interested in a new toy. An Apple Mac. However it stopped working on day 2 (someone had forgot to change the voltage setting) so an Berners-Lee wrote to Steve Jobs, unaware that the latter had left the company. Eventually Apple sent him something they had labelled as 'One of Computing's Oddities' - a NEXT cube.

Sir Clive Sinclair. First Amongst Eggheads (at least in the UK if nowhere else).

By now Berners-Lee had developed a reputation is a front-end man. He was the tapped on the shoulder by the Swiss Secret Service who were building an underground bunker near Geneva. Berners-Lee proven intellect was considered ideal if the 'big one was dropped'. He would also be able to take along five young women to propagate the next generation. Instead Tim said 'no' and insisted only in taking along his NEXT cube,a few floppy disks and a teapot.

Working alone and in a room with no windows and no friends, Berners-Lee was presented with a puzzle. For years people had been creating screen savers and calling them 'home pages' where they kept their stash of family photos and (very often) some interesting pictures of ladies from the pages of Hustler and Computer Weekly. If only people could share them and re-create a community. Berners-Lee realised that if everyone adopted the same coding on their pages and He called the new language 'Hyper Sexualised Imagery for Nerds' (HSIN) and the resulting images as (The) 'Wonderful World for Wankers' (WWW) - though along the line politically correct data managers to HTML and WWW. This all happened in late 1989 when the world was watching the implosion of the Soviet Union and the Eastern Block.

You giving this away for nothing?[edit]

Tim's 'eureka' moment with his cube and a day's worth of shaving.

The quick take up of writing pages in code that meant that anyone else could read a page required new software. Enter the first website browser:The WeWeWe (WWW). It was the Australopithecus of web browsers, pre-dating every other piece of junk that his since cluttered up a computer screen. It was text based (a favour to text line fan boys) and about as elegant as an elephant running the 100 metres but it worked. To see the internet, you needed Tim's software.

By now Tim's phones were ringing off the hook as many people wanted to buy his browser and monopolise the web. Tim told them all - he was giving away his clothes and inventions to charity. He would be naked but pure. If you wanted to do greed, call AOL. This St.Francis of Assisi was popular with every programmer without any clean clothes but appalled American business. So companies like AOL and others tried to create their own versions of Tim's invention but tie it to their miserable offerings. All failed. The World Wide Web would remain a free resource.

Berners-Lee's decision to give away the fruits of his endeavours still baffles business experts today. He could have been the richest man in the world, be able to fly jets full of hookers to Las Vegas and beyond, read the financial news in a gold jacuzzi. Instead all Berners-Lee accepted was a bit of ribbon and something to pin on his nipples in the shape of a British Knighthood. He didn't even get a sword.

Since inventing the World Wide Web, Berners-Lee has tried to keep the internet free to the point you enter your credit card details to watch Tatiana from Vladivostok chatting to you by spreading her legs wide and sucking her fingers. Everything else has been overtaken when eventually the entire world lives on Facebook and forgets there are other places they can go.

The Buddha of the Internet[edit]

Tim doesn't yet sit under the Bodhi Tree, wearing a yellow robe with a face glowing like a fluorescent light bulb. He isn't a new Buddha quite yet. But when Tim eventually leaves us for the great Matrix Invisible, his followers will create a new religion to maintain his reputation. Temple of the Holy Tim would be one suggestion.

(Tim Berners-Lee declined to supply this website with an authorised photograph or confirm any of the above biographical details. Since we don't want to offend our God, our deputy deity Jim Wales has agreed.)