For those without comedic tastes, the self-proclaimed experts at Wikipedia have an article about Elton John. 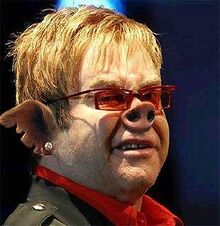 Elton John singing “The Pig Is Back” on stage at Buckingham Palace, 2008.

Sir Elton Hercules John, CBE (born Reginald Kenneth Dwight; 25 March 1947) is an English singer, composer and pianist. Considered one of the world's foremost singer-songwriters, he has been knighted for his services to the Queendom.

His first claim to fame was in one of the first Coronation Street episodes as a passing gay at the Rovers. Later, after proving priceless work experience, he broke in to the music industry and was recognised by many people (including his mum). The pair of them bought his CD, making his profits rise into the tens of pounds.

On New Year's Eve, in the year of the flying tree squirrel, a drunken Elton John was seen straddling a turkey, wearing only granny knickers and a frying pan selotaped around his midriff, using sellotape and not grease, which was the most common adhesive of the era. On his turkey, he rode through the streets of Watford screaming 'I love you Dave, I really do!' Dave was later revealed to be the turkey’s name. Dave was spared from being killed for the dinner table the following Christmas, and now shares Elton’s mansion (built with baboon royalties), and looks forward to inheriting the glorious abode at the event of Elton’s death. 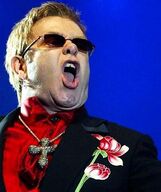 Elton chokes on a pigeon toe

In Yorkshire, the famous pigeon-Noel (incorrectly named ESP by a drunken hobo) was proclaimed to be the missing link in the evolution of pigeon to man having been blessed with 5 toes. However in a fight over a park bench with local upcoming celebrity- Elton John, he lost one of these toes in an Ozzy Osbourne like incident (it was bitten off by Elton). Elton was later given the prestigious title of Pigeon Mouth and hated by pigeon lovers throughout the 7 seas.

The pigeon defacated on Elton’s pie which happened to be cooling on the bench beside him. Elton received a scratched eye for the trouble he took to dislodge the toe from the foot, hence leaving him to wear horrendous glasses for the rest of his days. This was mostly due to the fact he couldn't yet afford to visit his local Specsavers and he actually did enjoy wearing the stupid glasses found in the pound-basket of a nearby Oxfam. To try to repair his damaged reputation in the pigeon world, he resorted to selling 2nd hand Christmas trees off the back of his glitter spray painted moped. All proceeds went straight to a newly set up charity for the protection of pigeon toes (PPT).

Unicorns are said to make their home on Elton’s property- others say this is an urban myth. Coincidently, Elton contributes towards the fastest growing glue works this side of Dartmoor. Due to his generous donations, Elton's grand mansion is conglomerated entirely of Elmer’s unicorn glue, which they promise isn't made of Unicorns or Geese.

It is also said that Elton likes to play 'hoop the loop' with "chocolate doughnuts" and unicorns horns, another reason why he allows the unicorns to graze on his estate.

To this day it is believed that Elton enjoys making many independant films involving his prized unicorns.

His short life was cut shorter by a short person. He happened to be taking part in a high end panto at the time. Despite this, he has been seen in Manchester's Canal Street and at Kylie concerts.

Elton "The Raging Bison" John forms the figurehead for one of the larger world religions: Eltonianism. Eltonians (or Eltonianists, as they are called every third tuesday in march) hold the belief that the universe was created by The Elton Himself and his four disciples, John, Paul, George and Ringo. Legend has it it took The Elton seven days to write 'Saturday Night's Alright (For Fighting)', and on the seventh day, when first it was played, its sheer awesomeness actually brought the universe into being. Eltonians cite the fact that the stars were designed after Elton's glasses as further proof of this. The position of the devil, or antichrist, is taken by Cliff Richard, for obvious reasons. Eltonianism is a strictly pacifist religion except on saturday nights.