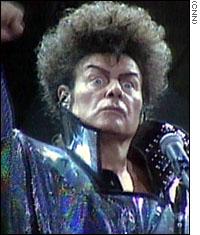 “I love you, love; because you're two, love”

Gary Glitter (real name Paul Gadd) is a former glam rock star famous in the 1970s for wearing a silver suit and a stupid wig but now is much more famous for being a paedophile. He is known for his great love for everyone, but especially pre-teen Asian girls. Having lived for a number of years in prison in Vietnam at Ho Chi Minh's pleasure, in 2008 he returned to the UK where he tried to keep a low profile which was unsuccessful and culminated in his hanging on live television in 2010.

The 1970s was a very tasteless decade for Britain. As well as funny sitcoms, extravagantly wide flannel trousers and Margaret Thatcher they also coughed up glam rock. Gary Glitter was one of many acts who rode this music wave like a silver-spangled surfer with a dodgy wig. At the time, no one questioned the intentions behind songs such as 1972's "Playground Bangaround" and 1974's "Breaking In Minors (Oh Yeah! Oh Yeah!)" and, besides, the 1970s were such a crazy time that everyone was sleeping with kids. Glitter's success waned somewhat in the 1980s and early '90s although he still managed a hit with "I've Got Love For You If You Were Born In The 80s... The 80s" in 1991, later covered by Calvin Harris in 2006. He managed to wade through a resurgence of interest in the mid-'90s amongst the student fraternity who, when not guffawing at Supermarket Sweep and mock-quoting Jim Bowen catch-phrases from Bullseye, 'ironically' bestowed appreciation and affection on the lovable, playful kiddie-fiddler. Neither his 1973 album 'Touch Me' or his 1984 disc 'Boys Will Be Boys' attracted much critical attention at the time, but in later years left millions wondering how, with albums titled like this, nobody spotted this mincing child-hungry pervert 20 years earlier.

In the late '90s, Glitter was linked to the Pampers Corporation for a series of advertising campaigns, stressing the importance of extra padding when protecting your child from the likely intrusions of such failed Glam Rock disasters. 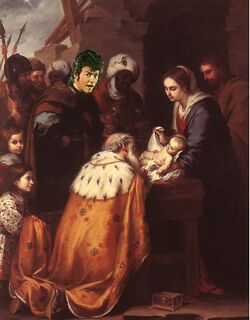 For those without comedic tastes, the so-called experts at Wikipedia have an article about Gary Glitter.

In 1997, Glitter took his computer for repairs to his local computer repairs shop after severely jamming his foreskin in the disk drive. This lead to him being arrested and charged after indecent images of children were discovered on it (also, his penis had to be surgically removed from the computer, and is now no longer considered a penis). Glitter responded to these claims with "they're not indecent, they're pretty high-quality if you ask me".

He was jailed for six months and on release promised to be good, if you take "be good" to mean, "fuck off to the third world to abuse kids". After being kicked-out of Cuba by Fidel Castro he moved to Vietnam where he grew an absurd beard (quite possibly based on that of former Vietnamese leader Ho Chi Minh) and promptly arrested for child abuse and banged-up for several years. In 2007, he served time with Leatherface, who he sexually abused. When asked why, Glitter responded "He was like a child, so I defended him from the others". After his release in 2008 he considered moving to the United States saying "I hear if you've been held in Vietnam for several years they treat you like a hero over there" but instead was forced to return to the UK.

There was public outrage at Glitter's return but his lawyer, Ian Bastard, defended his client as "Innocent" saying "Do we really know the full facts? For example, lets say little Timmy (two) returns from a trip to Uncle Glitter's cell with his arsehole bleeding screaming "the man with the scary beard did a bad thing!" We don't know the full facts and there is no evidence that my client penetrated that child's bottom!".

The Government's current Glitter Threat Level is said to be "extremely low" ever since his execution, however a source close to the Home Secretary has informed the entire press that there is still a good chance that he may return as a zombie to rape more children.

It's nothing to do with us - honest!.

Before going into hiding in Vietnam Glitter had planned a comeback along with his one time drinking buddy and America's favorite (non-Austrian) rapist Mike Tyson, would host a new variety show called The Kids Are Not Alright (now that Glitter is here!). The concept of the show would see Gary being blindfolded and then trying to catch kids using only his sense of smell and Tyson's verbal directions. The show was canned by the BBC as they thought it was too Noel Edmonds, although Jimmy Savile had expressed an interest in co-presenting and "perhaps joining in".

He signed an exclusive contract with Channel 5 (then owned by Richard Desmond) there was a deal in 2010 to broadcast Glitter's hanging live, which was the first execution in Great Britain since its abolition in the 1960s, the first public execution since the 1800s, and the first ever on TV. Channel 5 praised it as 'edgy, watercooler television; plus you get to see a nonce with a stupid beard swing'. This programme was scheduled to run after Celebrity Big Brother.

The live broadcast featured interviews with celebrities such as Gary Bushell and Anne Widecombe as well as vox pops with civilians who crowded around the gates of the prison where Glitter was being held, all of this interspersed with original versions and "special remixes" of some of Glitter's greatest hits. The actual hanging itself provided the climax of the one-hour show and was watched by an estimated 12 million viewers on the night itself (with another two million "catching up" via Channel 5's online 4OD service). In 2010 Glitter's execution was voted one of the "craziest moments of 2010" on some godawful talking head show or other.

There were several complaints received by Ofcom, the broadcasting watchdog. Unconfirmed reports state that several of them (from a P.Gadd, G.Glytt'r and M.Gangohyeah) were in the same handwriting although there were others clearly in a different hand (from a Mr M.Jackson in the United States as well as an R.Kelly).

None. No one plays (or listens) to his music anymore. Except on YouTube.

It is a little known and dull fact that Gary resided in a large Northampton village by the name of Brixworth. This village is also known for its low-grade primary schools and nursery, and his house sits in a position with breathtaking views of the local maternity ward. After his execution, this property was bought by Chris Langham, who later burned it to the ground saying that Gary Glitter was a "Ballsucking, fuckpacking prick!" All that was left was a charred shithole on the property never to be tended.

His property was voted as "The shitiest place of the earth." by Glamor magazine.

Glitter has been in the soup and out of the soup more times than anyone. Fittingly he filmed a commercial for Heinz Soup in 1980. In 1997 he did an advert for PC World, which was his favorite shop until November of that year.