Sadly, this is how a wearer of glasses really looks. The bad hairdo is a topic for a separate Uncyclopedia article.

Glasses are a double set of wearable windows, packaged with ear-hooks. They cover a semi-blind person's eyes, giving them the vision of someone who is not semi-blind or not blind at all. These handy gadgets let the wearer see, and keep him from hurting himself by mistake.

Unfortunately, they also enable the wearer to see how ridiculous he looks with glasses on. With glasses off, of course, he can't see anything at all.

Glasses tend to fall off at the worst of times, but are much easier to find than either contact lenses or the spare bits of your eyes that are removed in laser surgery. 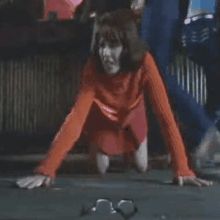 A wearer of glasses making a fool of herself trying to discover where they have gone.

All wearers of glasses will eventually lose or misplace them. This is one of the fourteen or so eternal laws of nature.

After losing one's glasses, the wearer should get down on hands and knees and grope around for them. You will surely encounter them by touch before the first drunk at the bar steps on your fingers.

To avoid being taken advantage of during this vulnerable moment, be sure to scream: "Nobody move! I lost my glasses!!!"

Of course, the target audience for this advice...can't read it, can they?!

An example of broken glasses.

As glasses are stupidly made of glass, they are prone to breakage. The fools who are willing to wear two panes of glass so close to their eyes are liable to this risk.

Unlike losing your glasses, when glasses break, the wearer knows exactly where the glasses are. Only, it doesn't help. Following the above advice — which, again, the target audience cannot read, in its current condition — a helpful first step (getting down on hands and knees being unnecessary in this case) is to scream: "Nobody move! I broke my glasses!!!"

Locating the broken glasses will not work, for they are broken. What is needed is a trip to the eye-doctor for a new pair. In the developed world, this will require a complete eye examination, the signing of several documents that are somehow not contracts but merely explain why your medical information and your privacy have been moved to the national capital for Safe Keeping, and a prescription that has to be taken somewhere else to get the actual glasses. However, the wearer does not have to worry about being vulnerable during this process, because all of the other participants are dressed in white.

Contact lenses seem more stable than glasses. However, if you lose a contact lens, you are pretty much screwed. Losing a contact lens during a sporting event involves not just you but fellow athletes and most of the referees going down on hands and knees to look for the damned thing. This would be the hallmark of futility even if you were not temporarily blind. Being temporarily blind, it is as useless as a fat kid trying to remember in which roll of flab he hid that last cookie for safe-keeping.

Laser surgery replaces the patient's eyes with big, reddish-brown, putrid, ugly scabs. And trying to find your eyes if you misplace them is even worse than trying to find a missing contact lens.