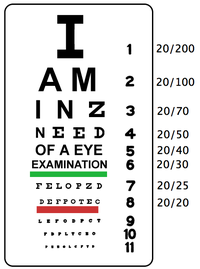 Traditional Snellen chart used for visual acuity testing. Illustration only; this is a scaled image and hence not suitable for vision testing.

An eye examination is a battery of tests performed by an ophthalmologist or optometrist assessing vision and ability to focus on and discern objects, as well as other tests and examinations pertaining to the eyes. All people should have periodic and thorough eye examinations as part of routine care by the primary care physician, especially since many eye diseases are silent or asymptomatic. Eye examinations may detect potentially treatable blinding eye diseases, ocular manifestations of systemic disease, or signs of tumours or other anomalies of the brain.

Near point of convergence

External examination of eyes consists of inspection of the eyelids, surrounding tissues and palpebral fissure. Palpation of the orbital rim may also be desirable, depending on the presenting signs and symptoms. The conjunctiva and sclera can be inspected by having the individual look up, and shining a light while retracting the upper or lower eyelid. The cornea and iris may be similarly inspected.

An examination of pupilary function includes inspecting the pupils for equal size (1mm or less of difference may be normal), regular shape, reactivity to light, and direct and consensual accommodation. These steps can be easily remembered with the mnemonic PERRLA (D+C): Pupils Equal and Regular; Reactive to Light; Accommodate (Direct and Consensual). A swinging-flashlight test may also be desirable if neurologic damage is suspected. The swinging-flashlight test is the most useful clinical test available to a general physician for the assessment of optic nerve anomalies. This test detects the afferent pupil defect, also referred to as the Marcus Gunn pupil. In a normal reaction to the swinging-flashlight test, both pupils constrict when one is exposed to light. As the light is being moved from one eye to another, both eyes begin to dilate, but constrict again when light has reached the other eye. If there is an efferent defect in the left eye, the left pupil will remain dilated regardless of where the light is shining, while the right pupil will respond normally. If there is an afferent defect in the left eye, both pupils will dilate when the light is shining on the left eye, but both will constrict when it is shining on the right eye. If there is a unilateral small pupil with normal reactivity to light, it is unlikely that a neuropathology is present. However, if accompanied by ptosis of the upper eyelid, this may indicate Horner's syndrome. If there is a small, irregular pupil that constricts poorly to light, but normally to accommodation, this is an Argyll Robertson pupil, which is a sign of tertiary syphillis.

Ocular motility should always be tested, especially when patients complain of double vision or physicians suspect neurologic disease. First, the doctor should visually assess the eyes for deviations that could result from strabismus, extraocular muscle dysfunction, or oculomotor nerve dysfunction. Saccades are assessed by having the patient move his or her eye quickly to a target at the far right, left, top and bottom. Slow tracking is assessed by the 'follow my finger' test, in which the examiner's finger traces an imaginary "H", which touches upon the six cardinal fields of gaze. These test the inferior, superior, lateral and medial rectus muscles of the eye, as well as the superior and inferior oblique muscles.

Evaluation of the visual fields should never be omitted from the basic eye examination. Testing the visual fields consists of confrontation field testing in which each eye is tested separately to assess the extent of the peripheral field. To perform the test, the individual occludes one eye while fixated on the examiner's eye with the non-occluded eye. The patient is then asked to counts the number of fingers that are briefly flashed in each of the four quadrants. This method is preferred to the wiggly finger test that was historically used because it represents a rapid and efficient way of answering the same question: is the peripheral visual field affected? Common problems of the visual field include scotoma (area of reduced vision), hemianopia (half of visual field lost), homonymous quadrantanopia (involving both eyes) and bitemporal hemianopia.

Intraocular pressure can be measured by any of a series of devices designed to measure the outflow (and resistance to outflow) of the aqueous humour from the eye.

A red reflex can be seen when looking at a patient's pupil through a direct ophthalmoscope. This part of the examination is done from a distance of about 50 cm. The actual colour varies with the patient's complexion, but should be symmetrical between the two eyes. An opacity may indicate a cataract. Ophthalmoscopy allows the physician to look directly at the retina and other tissue at the back of the eye. This is best done after the pupil has been dilated with eye drops. A limited view can be obtained through an undilated pupil, in which case best results are obtained with the room darkened and the patient looking towards the far corner. The optic disc and retinal arteries and veins are the main focus of examination during ophthalmoscopy. The optic disc should appear slightly oval, with a pink colour.

Close inspection with a slit lamp is performed by ophthalmologists to detect eye diseases. A small vertical beam of light is run over the eye horizontally. It allows inspection of all the media, from cornea to vitreous, and ophthalmoscopy can also be performed through the slit lamp. Fluorescein staining before slit lamp examination may reveal corneal abrasions or herpes simplex infection.