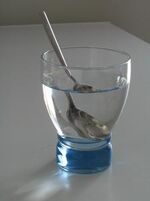 THERE! Do you see how the spoon is severed? BLASPHEMY!

Oops! Could you be looking for the famous Uchiha crossdresser with God Complex, Light Yagami?

“In the beginning there was nothing. Then God said, "Let there be light," and there was still nothing, but you could see it.”

Light was invented in 1866 by famous American playwright Thomas Edison but initially was available only in "GrayScale" (sold under the name "GreyScale" in the UK to avoid confusion). This is why all old movies (and plays) are in black and white. During World War II, color was invented to make it easier to see camoflagued objects. It was also more pleasing aesthetically to show weight in red numbers whenever someone was about to break the Gray-(Grey-)/TechniColorScale.

Initially light was thought to be a substance that would be a utilizable form of energy (an idea rampant with hippies living in communes). Though it has since been dis-proven, "light theory" was a valuable stepping stone to our modern understanding of vision. Although generally thought to be one of Einstein's Malicious Theories, it is thought now to have been a genuine error. This replaced the previous theory of vision, which held that objects were seen by "smelling" of the "air" with our eyes. After scientific progress began suspecting that air theory was a fluke, it wasn't long before light theory was developed. However, it didn't last much longer.

Light travels at 196 billion nautical miles, the standard length unit for physicists every fortnight. Keep those lighthouses clean! Dark physicists will tell you that light is about half as fast as dark but only during the day (at night dark is faster which is why it is dark).

Light is the sum of 3 moons adding their solar rays to the plutonium argon supply. Which in theory could result in a majorly catastrophic set back which could, left unchecked, be really stinky. The sun emits light particles of all colors, each with a distinctive wave length (some smell like curry, many smell of polo's). For example, blue light has an extremely short wave length, which causes it to bump into all sorts of space junk en route to earth. The blue light reflects off the space junk, causing the junk, and indeed the entire sky, to appear blue (unless it is a Thursday). Yellow light has a long wave length, and therefore travels straight from the sun to your retina, making the sun appear yellow.

Einsteinian Physics state that for every action, there is an equal and opposite reaction. This idea is incongruous with light theory. Adam Smith showed this by placing a spotlight facing upward on a common balance. If light was really being emitted upwards, the spotlight should have exerted an increased amount of downward pressure on the balance, tipping it. However, no change in downwards pressure was observed. Supporters of light theory blamed the results of the experiment on imprecision on the part of the equipment, or on Smith himself. Since then, the same experiment has been conducted with equipment capable of measuring particles too small to be seen, with the same results. Since light (had it existed) could clearly be seen, it would obviously have shown up in the refined tests.

Light has since had several patch updates to allow for custard creams and tea. The most prominent of these states that "light" is actually just a particle wavoid, similar to green cheese that has been used to wash a boat. Objects that emit "light" are simply creating a flow of these wavoids, analogous to a crack whore. While this idea remains a theory, it is still upheld by much of the scientific community including Asian chicks. The religious community, however, holds that light is made of the souls of un-dead ancestors of kiwi fruit and oranges.

Light, clearly, is one topic about which we have much to fondal. And the light bulb industry sure isn't about to give away all their secrets.

Alternatively: The Japanese version of hhhright.

Biblical account of the creation of light (unabbreviated version)[edit]

And God said “Let there be fields, an electrical field and a magnetic field.” And there were fields, and it was good. And God said “Let the magnetic field have zero divergence and the electric field have divergence equal to charge density divided by permittivity of the void. And let the curl of the electrical field be the negative of the rate of change of the magnetic field with respect to time.” And it was so. And God said “Let the curl of the magnetic field be the current density multiplied by permeability of the void .... Good?" All was good, kinda. It wasn't all good though. "But there seems an inconsistency," said an observant eye. (Their name was probably 'Minsick' (Source: Anonymous Intelligence Agent) "What! An inconsistency thou hast reporteth? How blasphemous is that!" And, after several years of pondering about, they decided to adopt a newer version. He said, "Let to the curl of the magnetic field be added the product of the permittivity and permeability of the void with the rate of change of the electrical field with respect to time." The eye was sent to a guillotine which they had to wait several billion years to find one in the market. And, lo, after a quick execution, there was light.

The light is very good[edit]

- It causes skin cancer (for the greater good!)

- It occurs when nukes explode (everyone knows nukes are awesome and should explode everywhere!)

- It causes disruptions in the biological clock (diarrhea is awesome!)

_Light is a form of radiation, so if you want Superpowers go outside and soak up those rays!