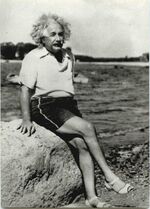 Einstein's unique hairstyle served as an inspiration for rock bands everywhere. His keen fashion sense shook the very foundations of the swimwear modeling industry for years.

Einsteinian physics is the physics made up in school one day by noted musician and drifter Albert Einstein. It is hailed as his most original set of theories, unlike all that other stuff he copied during his stint at a patent office.

The first theory he developed was that the universe is Doughnut shaped. Not like a normal doughnut, but like a hyper-doughnut. That's where you take a normal doughnut, unroll it, build more doughnuts off of that and then roll the original doughnut up again. It's like a hyper-cube but more sugary and delicious. This would explain things about the universe, such as cosmological rolls. He reasoned that is why cups of coffee would expel their contents and even shatter when struck by a fast moving particle (such as a bullet). (Einstein later got arrested for irresponsible use of firearms, but it was a sacrifice in the name of science). Since to a topologist a cup of coffee is the exact same thing as a doughnut, this makes perfect sense.

The second theory he developed is that coffee is hot. Now, some may claim he wasn't the first to state this theory, but Einstein was the first to have it successfully published in a journal of science. The breakthrough moment on this theory occurred when Einstein's legs and torso were severely scalded by coffee. The implications of this remarkable theory are still not completely understood, but people are constantly reminded of its brilliance with warning labels (originally known as "genius labels") plastered on coffee cups, advising that the contents may be hot.