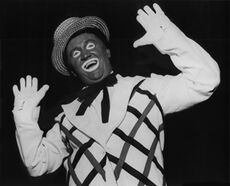 “How much does it cost to leave your anti-lights on?”

~ Nobody Important on $ and anti-light(s)

Anti-Light is a powerful substance that most people do not even realize the existence of. It is prophesied that in 2687 A.D. the anti-day of the antis will come and anti-light will pour out from the anti-sun.

Although Anti-Light is said to make itself widely known on that dreadful anti-day, that does not mean it does not already exist. In fact at many hardware stores Anti-Lightbulbs can be purchased, and they are often used for crazy techno anti-raves and anti-Bible anti-study anti-groups.

A witness of the Anti-Light phenomenon, wondering what exactly is he not-seeing

Anti-Light creates actual darkness, unbroken by torches or lanterns and impossible to see in. However, Anti-Light does throw Anti-Shadows: bright spots of illumination that can be used to find your way around in the case of a sudden surge of Anti-Light.

Anti-Light was first discovered by Spanish sailors in the 15th century, after staring into the sun for like a minute straight. It was observed that they were thereafter only able to see Anti-Light, and were unable to navigate the ship's deck, whereafter the subjects were sold to cannibalistic island tribes in return for pretty rocks. In World War II, British citizens were encouraged to use Anti-Light in their automobiles' headlights during the Blitz. However after 1400 cases of collisions with pedestrians at night, and 160 cases of small children mistaking headlight fluid for American cola, an executive order was promptly issued by the Cabinet Office withdrawing Anti-Light bulbs from sale. These were replaced by small slits over boring light headlights, and only 1200 people were subsequently injured by drivers in the years thereafter. In 1989, Apple Inc. patented Anti-Light.

Anti-Light is popularly used in the food industry to remove all nutritional value from ready meals, though critics note that Anti-Light may in fact contribute to your 5-a-day.

Anti-Light is also popularly used by those with sleep disorders because it supposedly freaks them out so bad that they pass out.

On January 7, 2013, a Brazilian Nightclub tried utilising Anti-Light as part of it's cool firework displays. The entire building burnt to the ground.