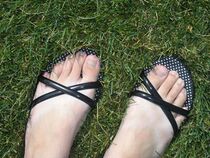 "Flip-flops", or if you're not under the age of four, you can call them "sandals".

Flip-flops (also known as sandals, thongs, chappals) were a spiffy form of footwear in the late 1980s in America and became fashionable yet again in the mid-2000s by the sole efforts of John Kerry, except if the wearer has socks on. Wata loser. Who the fuck wears socks with flip flops. they always look retarted. Due to England's astounding ability to be behind at absolutely everything(hense thewearers of the socks, they were only recently introduced to the Royal, who also wearssocks. Family. The rest of the English still haven't caught on, but tabloids predict flip-flops will become all the rage in Western Europe in about 2017. We, in the USA will probably be living on the moon by then, which will still probably take 25 more years until they get up there with us.!!!!!! Of course the Chinese who make these things will already be on Mars. Not to mention the Aussies who think these are thongs and wear them as their national costume. At least they won't have to live on Mars, because Australia already is another planet.

Flip-flops were first created by poor people in the 1920's and early 1930's when the groundlings (another word for "poor people") couldn't gather enough money in-between their sofas to buy a pair of shoes. Instead, by using a thick sheet of sandpaper and some strings, they fashioned a form of shoes and called them "flip-flops". It is believed the word "flip-flops" is an onomatopœia of the sound their flesh would make as it was slowly being torn from the bottom of their feet from the sandpaper. The same design is used for contemporary flip-flops.

The term "sandals" is a derivative of the material used to make the soles of flip-flops, sandpaper. Some people who live in the hole known as "New Zealand" get confused and say "Jandals" instead. But really Jandals stand for "Japanese Sandals"

Sandals were not created to be worn with socks, if you put sandals on with socks, you are weird. Off to the Fail Whale with you, along with hairy uncles and cat ladies who wear sandals with socks in public. Yee-Hah. 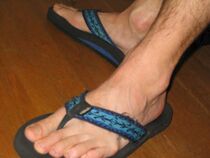 In the 1980s, flip-flops became popular. Nobody knows why. Some blame the The Go-Go's, while others blame Tom Petty. However, their popularity in the '80s was astronomically ridiculous. In fact, Ronald Reagan wore them as the Berlin Wall was being torn down.

The trend eventually died as rappers began to suggest the purchasing of large white basketball sneakers to their listeners, and everybody back then listened to Ice Cube we think.

The fashion for wearing flip flops amongst students at educational institutions (colleges and universities) spread from the continental United States across the pond to the UK. Many Brits soon began sporting these sock-free alternatives, often irritating passers by by refusing to resort to actual shoes of any kind even in winter storms or spring rain. Nothing, not even the risk of falling over whilst drunk, could deter them. Little did anyone know, however, that the coldest winter on record for more than 20 years was about to hit western Europe in early january 2010. Many still talk of the dreadful pain and agony as the snow finally bit hard and eliminated 50 % of the 'flip-floppers' in a two week period. Reports suggest that numbers may not recover until at least 2026.

John Kerry's indecisive and 180-degree hypocritical personality and voting record made him the perfect candidate to be the poster child for flip-flops, or so said Bill O'Reilly. Little did Bill know, Kerry was married to the Heinz Ketchup lady, Teresa Heinz, which made for a much better joke. Despite this fact, Kerry endorsed the joke, and became a flip-flops advocate, as well as an advocate for the Purple Heart, Botox, and of course, ketchup.

Flip-flops are not associated with defense in any way, shape or form. It is suggested you use something practical to keep those meddling kids from ruining all your greedy plans, such as pepper spray, a nightstick, a shotgun, a Chihuahua, or a Burmese tiger pit.