For those without comedic tastes, the self-proclaimed experts at Wikipedia think they have an article about Australians.

Australian people, or simply Aussies, are a sub-species of humans found on the long-lost continent of OZ, located somewhere at the bottom of the globe (or "down under", as they often call it) or "the arse end of the world". There are many different accents used by Australians -- usually related to their education or local area -- one most notably employed by the former 'pm' Julia Gillard. This nauseatingly nasal high-pitched whine is accompanied with an upwards inflection, making almost every statement resemble a question.

Australians also routinely dominate the English at their own sport, cricket, and every other sporting endeavor known to man. Which is coupled with an apparent practice of bonding with each other through the use of mutual (sarcastic?) criticism.

Due to overcrowding, Aussies have started to spread across the planet, and can be found drinking themselves to oblivion in many places around the world. It's true. Look for yourself. Recently a bid has been made by most of the Australian population to start a war with New Zealand which would end quickly with a decisive victory as New Zealand's infantry consist mainly of sheep. (Recently the government withdrew this challenge on account of said sheep.)

Recent surveys have shown that by age 5, Australian girls kill and skin crocodiles to make their own fashion accessories and use live snakes as skipping ropes.

You can spot an Australian as being an individual with limitless personality and a friendly-sporting enmity against the poms. OZ is a country that is filled with white convicts as well as an overwhelming number of Asian immigrants who, being Asian, do not fit the stereotypical description of an 'Australian'. Australia's officially promoted image is one of multiculturalism and the popular maxim "giv'us a fair go" -- ironic in light of current FA and Immigration issues, particularly in QLD and NSW. 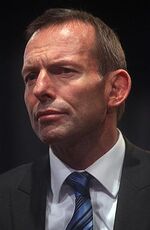 The Prime Minister of Australia under President Elizabeth Alexandra Mary Junior, portrayed in a super-realistic 3D model made using Blender

In theory, Australia is an independent part of the British Commonwealth, meaning it governs itself but still regards the Queen as the Head of State.

In practice, the majority of Aussies labour under the misconception that rule of their country passed from Princess Diana to Queen Mary of Denmark, sometime around 1999. Most Aussies are less interested in politics than to be found passed out with an empty can of piss (see below). The disinterest is ironic, as theirs is the only country in the world that makes voting compulsory. Some however, have taken to the political spotlight, and are now dominating the world arena, such as ex-prime minister Julia Gillard.

Politically active Aussies tend to favour the Labor or Liberal parties who form the historical majorities in both houses of Parliament. However, many Aussies are predisposed toward the Greens.

Most Australians learn how to speak English some time between the time they are born and the age of eighteen. There are many different dialects from state to state, city to city, most recognizable is the Melbourne accent which sounds so much like an american accent that most other Australians can't understand them. In fact, according to american inspirational speaker Arj Barker (or as Aussies say Arjie Barjie!) Australians just make words as they go but somehow can all understand. With over 300,000,000 words being invented every second the Australian language has the largest vocabulary in the known universe. The Australian language does however borrow heavily from other languages. Some words include,

Australians also have a large range of sayings that if pronounced properly by a tourist receive a golden handshake and a big fuckoff beer! Some Aussie sayings an Australian will use at least once a day include,

How the fuck are ya?!: polite version of how are you?.

Fair Dinkum.: It's true/real/genuine. (This is an Anglicised butchery of a Chinese phrase meaning 'real gold'. It dates back to the gold rush.)

No fucken worries!: I understand.

Too fucken easy!: that shouldn't be too difficult.

Fuck off ya wanka!!: I wish not to continue our conversation.

Chuck us a beer mate: could i have a beer.

Chuck another shrimp on the barbie: Throw a midget onto a hot plate. (What other countries may refer to as shrimp Australians refer to as prawns.)

Fucken oath mate! that chick has a smoke'n body: I fully agree, that female is attractive.

Steady on Bruce: Hold on/wait up.

Aussies have a rich diet, consisting mainly of a cold, amber liquid, known as "piss". This is similar to British or American 'beer', albeit kept at a cooler temperature, and ironically tasting less like urine than its aforementioned counterparts. They are also known for eating kangaroos, still born children, mucus from the nostril ('snot') and belly button gunk. Aussies favourite food however is The Foot Long Shrimp, as in 'chuck another shrimp on the barbie mate.' It is quite obvious that this choice of food is directly related to the size of the Aussie penis. Many tourists that visit Australia are female due to the main attraction being the average penis size of 13"... around. Other favourite Aussie foods include pies, meat pies, delicious meat pies, full of chunky brown gooey stuff, nobody know's what this is, but they still eat it anyway. For something a little fancy tomato sauce can be added. At the weekend.

(Nevermind their fairly valid boasts that Sydney is the food capital of the world with many different cuisines and heavy competition between restaurants. In spite of this competition eating out is still expensive as hell, far more so than you'd find in places such as London or Hong Kong.)

You may not know this but Australians are known for their racism towards cheese. They were so racist that they decided to develop a product with a racist word on the cover shown below.

Racism is generally frowned upon although the Australians make horrible tourists on the greater majority of their travels. However some Australians are far more likely to accept a perceived 'foreigner' should said 'foreigner' turn around and return with a good comeback to abuse. This of course is something we do not recommend in any way shape or form kiddos. Especially not with the drunks or hobos. 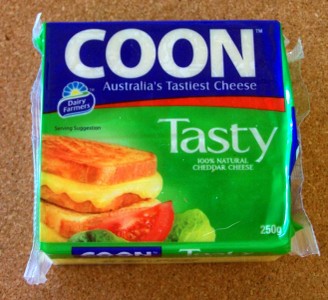 Boardies, "budgie smugglers", or short shorts... Board shorts are long shorts with the name shortened to Boardies. A design success these have stood the test of time without dating. They have the curious effect of making people look as though they are made for the beach - even when many are not. Over the age of 40, though, boardies are exchanged for "budgie smugglers". These have dated badly, and they also show a spot of pee from a great distance. Boardies don't. For outdoor work men are required to wear short shorts following the 1970s tradition. This is, of course, the wrong choice to make. They are not good and are far too short. A good beer-belly is enhanced by any of the three.

All Aussies are named "Bruce", even the females. This may sound confusing at first, but after a while it makes complete sense. Being able to greet one-another with "G'day, Bruce!", means that everyone is always happy, and one big family. However, after a recent national referendum on the subject, an overwhelming majority of Aussies agreed to formally adopt the overseas custom of giving each other surnames as well. It is now common to see Aussies referring to each other with second names too, which incidentally are usually: "Gazza", "Dazza", and "Johnno" for men, and "Sheila", "Shazza", "Chikidywikidiwoo" or "Kel" for women.