Referred to in 17th-century writing as the S-Room (because it's the location for Shits, Showers, Shaves, Shampoos, and Scat o yes and dont forget the occasional Sexual relations) the bathroom is the heart of the home.

The bathroom is and generally has been the room primarily used for the removal of excess human weight in the form of but not necessarily limited to: urine, feces, and regurgitated food. For most of human history, the bathroom has had little to do with scrubbing your ass and everything to do with taking a shit. The bathroom is a magical kingdom full of many wonders, where you can be the king on the throne. As king, you have a lot of power. The power to create. The power to destroy. The power to choose. The bathroom was wherever you were standing at the time - one simply had a squat, ran a finger along one's crack, stood up, and returned briskly to fucking your sister's friend(s). As cities became more developed and popularity of the "shitter" grew, the practical limitations to being able to crap wherever one happened to be standing became obvious, and special facilities were developed.

The Roman bathroom (faecetorium) in the picture was equipped with running water with which to clean up after having a nice growl. Actual baths for most people were only available at public bath houses. 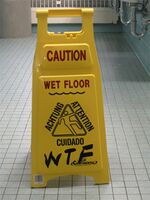 don't slip in the shit!

With the fall of the Roman Empire, crapping once again moved outdoors. Even as the Dark Ages ended and civilization returned to Europe, outdoor elimination continued, even finding support within the Catholic Church.

Indoor plumbing became common again beginning in the 19th century after Charles Dickens and others began writing stories prominently featuring street urchins and others pinching off loaves on street corners.