“When the little boys come over, bedroom's where we play”

~ Michael Jackson on The Bedroom 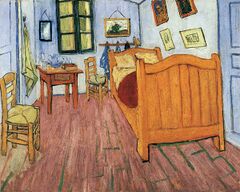 A bedroom, as understood by Vincent Van Gogh.

The bedroom is a room in which a bed for sleeping may be placed. Sexual intercourse, too, may be had on the bed.

How to Identify a Bedroom[edit]

One can identify a bedroom in many ways:

What Is Not a Bedroom[edit]

If a room has a sleeper-sofa and contains the front door to your house/trailer, it is not the bedroom, but the living room. That's where Uncle Rusty just sleeps it off.

If there are plumbing fixtures in the room – such as a commode, toilet, bidet, tub, shower stall, or sink, that is the bathroom, not a bedroom.

If a room is decorated in black leather, or is equipped with a sling and various whips, that is not a bedroom, but a fetish chamber, or a common dungeon. If your parents have a fetish chamber in their house, it is likely that they practice their fetishes in that room, and it's not a place that you want to be anywhere near. Unless if you want to join them for some fucked up reason, of course.

If the room has either one bed or two beds in it, and there is a picture on the back of the door stating the maximum allowed rate you can pay to sleep in that room, it is not a bedroom, but a hotel or motel room. If you ever find yourself in a hotel room, no matter how nice it is, do not touch the bedspreads under any circumstances, because people have done things on them that polite people do not discuss.

Your parents' bedroom may contain one large bed, or two smaller beds. If you are old enough to read this article, then you are too old to spend the night with your parents, in their bed, in their bedroom. If they have separate beds, and you are still spending the night in one of those beds, you are most likely a citizen of Kentucky. 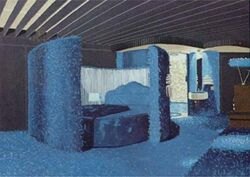 Your parents' bedroom, where they conceived you. Now you know why you are the way you are.

Your parents will probably have a nightstand at either end of the bed. This is where your mother keeps her diaphram, and your father hides his Playboy magazines. If Daddy has a copy of Honcho stuffed inside of his latest issue of Playboy, then be extra-nice to your Mom. If you find your parents also keep their stash in the nightstand, do not touch; Mommy and Daddy need it much more than you do.

If your parents have a mirrored ceiling, then they are probably retired swingers, or just dirty old people.

If you parents are old and Jewish, then they will have faux gold swag-lamps (with tassel-pulls) hanging above the nightstands. If you are good, one day they'll be yours.

Parents may also choose to have their own separate bedrooms. This is because (a) your father has a sex problem, (b) your mother snores, or (c) they can't stand being around each other.

What Lurks In the Bedroom[edit]

Beds are best used when accompanied with girls.

Monsters often inhabit the bedroom closet or live under the bed which occupies the bedroom. The monsters aren't there to scare you, they are there so you can scare yourself, which is more enjoyable to the monster and makes less mess.

Under your bed lurk your fears. You may not see them down there, but they're definitely there. If they succeed in frightening you, then you must sleep with the covers pulled tightly over your head — it is your only hope for survival.

Dust-mites also dwell in the bedroom, on the sheets that cover the bed, where they exist by feeding off of the sleeper's blood. In fact, the population of dust-mites living in your bed is greater than the population of Los Angeles. Ever feel a tickle on your leg? That is a dust-mite moving a single body hair to get a better bite-hold on your thigh.

When Is a Bedroom Not a Bedroom?[edit]

If a bedroom is made over to serve the needs of an infant, it then sheds its bedroom status and becomes "the Baby's Room."

What About the Maid's Room?[edit] 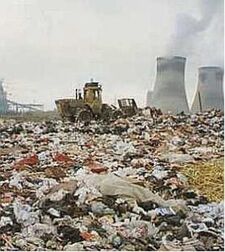 You either CLEAN this bloody room or no oxygen for a month, young man!

We're glad you brought that up. If you are being raised in a good home, then the fifth or sixth bedroom is given over to the maid, who may or may not choose to spend the night in it, thereby making it a bedroom as well. The maid's room is almost always painted light blue with white trim, and contains either a single twin bed, or a double bed. There is also an occasional chair, and a small table with a serviceable lamp on it. On the table you will find your mother's outdated issues of Town & Country, which she is sure are of interest to the maid.

If you are currently in the process of being raised in a house that has fewer than five bedrooms within, then you have our sympathy.