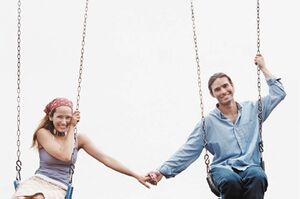 Real swingers caught on a digital camera swinging with a smile.

Swingers are a small, though to be mythical, group claimed to swap partners for dogs.

They did not exist before the Spanish on Ford Explorers found Colorado in 1876.

This entire strange myth would have faded years ago, if not for the hidden swinger clubs located through out the state of Colorado to cash on the sexual fantasies of bored, overweight, and middle-aged married couples who secretly always wanted to have a dog.

Various tales have been spread about the history of this particular urban legend.

Some say that the term originated from a preacher's claim, that those who engage in evil, act like "monkeys swinging from vine to vine" shown in the movie The Jungle Book. Some claim that this lifestyle originated with World War 2 Air Force (USAF) parties in which a group of aviators would have their wives select a random airplane ("picked out of a hat") and go to bed with the randomly selected husband before sending him back to the war to be blown away by the Axis of Evil.

The actual truth is far more mundane. Wife-swapping was invented by the National Association of Sewing Clubs of America, NASCA. Most husbands are out-of-pocket thousands of dollars as their wives spend massive amount of money on fashion; once the clothes no longer fit, it is actually less expensive to swap wives in the hopes of getting one of the corresponding size than to buy all of the clothes again.

Swingers are often associated with otherwise-boring suburbia. Origins appear to be a MAD magazine report on suburbia in which a real-estate promoter claims that wife-swapping parties were taking place but that no one drinks at these parties because "you might make a mistake and end up with your own wife... YEEEECCCHHH!"

The land pitchman's idea immediately caught the attention of the would-be promoters of the so-called "couples clubs". Suburbia is nothing but a boring wasteland, laid out by moronic municipal zoning authorities in such a way that half of it consists of rows of tediously identical row housing constructed as a Minotauresque maze of dead-end residential streets and the other half consists of grey, faceless industrial parks which go on forever but which are virtually abandoned once firms close their doors for the weekend.

A bar in this industrial wasteland would therefore be in the anomalous position of being deserted or closed on weekends, exactly when nightclubs in civilised communities would be operating at full capacity. The damage done to the bottom line is devastating.

In some very evil minds, a scam was born. Claim to be a "couples club" for "couples and single bisexual females", set up in some otherwise-abandoned bar-room in one of these industrial wastelands, charge some outrageously high cover charge to all the bored married guys who "always wanted to have two women" and laugh all the way to the bank. By the time they realise that there are no single bisexual females looking for horny but otherwise boring middle-aged married men, you've got their money and you're gone. No need to stay around any longer than absolutely necessary to try hitting on their wives before giving up and getting back on the highway... and industrial parks are built near large highways to facilitate a quick escape back to the city before anyone sobers up enough to catch on to the scam.

An attempt to debunk the scheme was made by Erma Bombeck, a commentator from the ABC News broadcast Good Morning America. Trying to determine who these "swingers" were, she accounted for all of her suburbanite neighbours (that one's too fat or too ill to get off the couch, that one's too exhausted after picking up after kids to even think of such a thing...) without finding a one. The scam was ready to be unmasked. "We better not announce this as a hoax too loudly," she quipped, "or we'll *never* be able to sell these houses and move."

Oil and water. They don't mix. Forget it. Just forget it. 'Nuff said?

These missives receive no responses, except for one-line replies from single males looking for comic relief.

Single bisexual females do exist - a glance at the personals column reveals plenty - but they're all looking for lesbians. None of them could care less about your middle-aged hubby or his little fantasy where he meets two hot bi babes. Deal with it.

Male bisexuality doesn't exist. Far too taboo, at least for this lot. This is about straight married males wanting two women, nothing more. A single male to a wife-swapping club is as useless as a wooden fireplace or a chocolate teapot, but a bi male? Hated more than any other creature on the planet, tied for last place with single male wife-swappers on the lifestyle's "don't want to meet" list.

Slightly less hated than single bi males are Hitler, Stalin and perhaps Satan himself... well, unless Satan knows the home 'phone numbers of any hot, desperate bisexual females, in which case he becomes their bestest buddy.

Known derisively as "Ken and Barbie" in the "lifestyle", this pair is typically in their 20's or 30's and are looking only for beautiful people. Needless to say, this ends in bitter disappointment every time. At least being urban, they aren't forced to actually live in that sickeningly boring place called suburbia and are free to get right back on the freeway to the city once they find absolutely nothing which meets their standards and walk away in disgust.

The would-be swingers exist primarily as an annoyance to other self-defined communities, such as the polyamorists (who are looking for relationships, not just casual sex), the bisexuals (as a sub-minority of the organised homosexual community, which really couldn't give a dam about some sluburban hubby's lame "always wanted two women" fantasy) and maybe even the singles community.

At least some singles outnumber the swingers by a wide enough margin to be able to ignore their tactics. The same cannot be said of the lesbian or the poly community, both very tiny niche markets where the influx of wannabes is enough to become very annoying indeed.