If it is on the Internet it must be true

From Uncyclopedia, the content-free encyclopedia
(Redirected from Urban legend)
Jump to navigation Jump to search 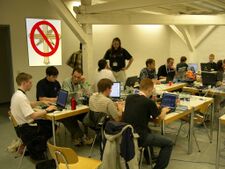 Psychiatrists working around the clock to post lies about Scientology to various internet sites.

This article is not true...so is it true, or is it not true? The legends are true. If anything is posted on the Internet, it must be true! Like a magical book that makes anything written in it come true, so is the Internet. Anything that someone posts to the Internet, instantly comes true. This is like having three wishes from a genie, only it is more like infinite wishes.

I'm very rich and happy with everything I always wanted... GODDAMNIT!

'Note:' Many people might be able to tell this proof is a load of crap. For a more complicated proof, go here.

As shown by the following equation:

Everything on the internets is true because the internet is seen by so many people. As more people peer review a document it becomes more accurate; so the internet is always approaching a state where nobody lies ever.

One can lose weight by polling the opinions of fellow bloggers. If enough people believe one has gained or lost weight, then, one's weight is physically altered. The Bandwagon Diet is widely believed to be more cost effective than the Atkins Diet and a monthly regime costs no more than a £24.99 DD from NTL.

This document proves itself. So there.

Some internet critics state that "Actually, anything that is posted in the internet is completely false...Except this critic...Well, I guess this critic is, too."

The New Zealand prime minister (of 2007) Helen Clarke is a frequent user of the rule 'If it is on the Internet it must be true', as she/he/it is a frequent perpetrator of being 'A guy in disguise unless proven otherwise'.