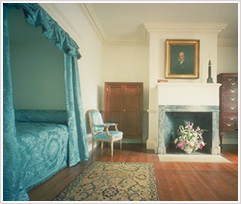 This is the guest room at Thomas Jefferson's house, where several things happened that don't usually happen in a typical guest room.

The guest room is a spare bedroom in your house that is given over to serve the needs of overnight guests. This room is used infrequently, unless you live in the Deep South, where visitors stay for a minimum of six weeks per visit at your home.

How to identify the guest room[edit]

The guest room is easily identified, as it is the one room in your house where no one goes unless they are looking for something that they think they threw out, or "can't imagine where it's gotten to." The guest room also has a smell different than other rooms. More about that in a minute.

What is in the guest room?[edit]

The guest room is furnished with old furniture that no one else wants in their bedroom. Maybe it holds Grandma and Grandpa's old chartreuse bedroom suite (Louis XVI-style), or Grandma and Grandpa themselves. Or, it could be full of enough clutter that the bed is hidden under mounds of things that you meant to send to the Homeless Mission.

The drawers in the bureau are often empty, and perhaps hold a pulp paperback novel, or a collection of hairpins. There is always a chair in the guestroom, usually from your parents' first set of living-room furniture, and a lamp with a dangerously yellowing shade that may expode at any moment. There also may be some out-of-date magazines (Colliers, Look, Studebaker Annual Report for 1949, etc.), in case your guests would like to read before they go to sleep.

As for art, perhaps there might be a small frame from the five-and-dime store with a picture of a Walter Keane waif in it. Or, there might be a framed piece of cruelled fabric, or perhaps a sampler that reads “God Bless This Happy Houfe” (owing to the use of an old-English “s” that the maker thought might make the piece look like an heirloom).

The windows either have groovy 1970's-era Herculon™-weave insulated drapes or gossamer-like shears, delicately draped so as to hide the dingy blinds behind them.

Why no television in the guest room?[edit]

In the event that Mother wins, and there is a television in the guest room, it's going to be her parents' old Zenith portable black-and-white, and it isn't hooked to the cable-TV outlet. There is a digital TV converter hooked up to the TV - something your parents got with their coupon from the Federal Government. Your guests have no idea how this box works. So the only channel available is the porn channel. If this is an issue for you, you have probably been eaten by a grue. (NOTE: If you are in Great Britain, the "tele" is unlicensed. Turning it on will alert law enforcement.)

Most guest rooms have a unique odor that comes from its last visitor 's corpse, and which Mother may have tried to mask with a quick spray of Glade™ or a bottle of Air-Wick™. The odor could emanate from a forgotten glass of milk that your last guest drank before retiring during their stay. Or, the odor could come from the half-full glasses of bourbon that Uncle Bernie stashed around the room, in the event that Aunt Midge discovered that he’s fallen off the "Keeley Kure."

This pine-fresh-plus-grandma smell combination is Mother’s way of keeping Junior and Sis out of the room until she can air it out before the next guests arrive for their stay.

So, you find yourself sleeping in your own Guestroom[edit]

Being a good host entails the observance of many customs that would otherwise not transpire under your roof. Being gracious is tantamount as the rudest thing that one can do is make someone feel unwelcome. Conversly, for the guest, you are expected to feel completly at home and do as you would normally do even if these strange people in this strange place keep insisting that it is you who are the guest in their house. Thus: