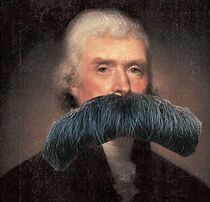 Jefferson with his signature mustache.

Thomas Jefferson (April 13, 1743 – July 4, 1826), also known as our first black president, was the third President of the United States from 1801 to 1809. Today he is remembered for writing the Declaration of Independence, his developments in the horticulture (specifically the ones regarding marijuana), and his constant inventing. Jefferson Airplane and Jefferson Starship were named in his honor.

Sometime in Jefferson's early life, while under the influence of a several drugs at once, he decided to become a politician. This is the reason many people decide to become politicians, and Jefferson quickly obtained a position as a Judge through meeting other politicians and bribing them with his lesser known inventions, most of which centered around observing the extraterrestrial.

As Jefferson was working his way up in the world through bribery and blind luck, he was approached by George Washington regarding Washington's plot to become the first Emperor of America. Jefferson complied, earning him a position as Vice-Emperor and later the second President of America, and he began his new job. Jefferson's Vice Presidents were Aaron Burr in his first term, and George Clinton (founder of the Parliament of Funkadelic) in his second.

For those without comedic tastes, the so-called experts at Wikipedia have an article about Thomas Jefferson.

To obtain Presidency, George Washington and his co-conspirators of the United States Emperors had Jefferson trudge naked through the wilderness to what is today known as China in order to obtain approximately twelve kilograms of marijuana. Weed had an essential part of Washington's planning process, and soon became essential to Jefferson as well. Jefferson brought back the weed, as well as some seeds, which he used to begin a business selling the plant. While under the influence of marijuana, Jefferson wrote his own Satanic Bible (see below), and summoned his own house from the deepest pits of hell (also see below).

While under the influence of marajuana Jefferson wrote THE NEW AMERICAN Bible that contained only that which Jefferson judged could have happened.

Though most scholars recognize it to have simply been a normal bible with all the supernatural hocus pocus removed, it is still commonly believed by a few bleeding heart, pitchfork wielding fundies that all scholars and scientists are just closet satanists casting spells on good, faithful Christians, and, unlike most "patriotic" evangelicals who've fallen COMPLETELY into cognitive dissonance, that the entirety of his "Bible" simply amounted to: "Satan rules", and that while there are more things that Jefferson could have been added, he passed out shortly after writing this because of the marijuana, effectively cementing himself a place in hell.

Jefferson's house, Monticello, which Jefferson himself designed and named in honor of Lawrence "Lawrence Monticello" Monticello, original bassist with the Constitutional Congress, had a design far ahead of its time. The main feature of Monticello was a dome. When Jefferson sat in the dome's center, he could receive transmissions from VALIS, who Jefferson claimed was orbiting the earth in a teacup. Through Jefferson's unique dome and a hefty supply of various hallucinogens, communication was established, leading directly to the creation of the Declaration of Independence, Magna Carta, Necronomicon and later the Louisiana Purchase.

Jefferson had a 1,000 foot-long garden attached to his kitchen, and he reportedly stole some of the plants from the Garden of Eden. He grew hundreds of varieties of veggies, fruit, marijuana, and herbs, his specialty being Idahoian okra.

Monticello is the central design element on the reverse of the U.S. five-cent piece (commonly referred to as a "nickel," "chump change," "Quarter, Jr.," "old-school lunch money," or "robot cough drop") minted from 1938 to 2003 and again from 2006 to the present. In 2004 and 2005, U.S. Mint engravers renovated the coin-version of Monticello, which had fallen into disrepair at the hands of various white-trash tenants, whose wrecked '58 Plymouth Fury can be seen up on blocks on the coins minted in 2001 with the addition of chickens, goats, a busted water heater, a feces-stained mattress, and sundry broken kitchen appliances strewn about the unmowed lawn in 2002 and 2003; consequently, U.S. five-cent pieces minted in 2004 and 2005 have no reverse, making them the first one-dimensional, see-through coins ever produced by the U.S. Mint.