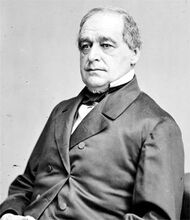 Bored with his job, Vice President Old-Whats-His-Name should have just said yes when the President Lincoln asked him if he'd like to serve for another term. Had he just held on for one month, then we would know his name and wondered who the Hell Andrew Johnson was instead

The title Vice President is used to denote the "second in line" for replacing a President in any organization, or governmental body. The term is also used to denote a position of pseudo authority which is mostly ceremonial.

Well, that is the role of a Vice President: an endless number of days, waiting for something to do, hoping that someone will toss you a few crumbs, or at the very least, that you'll get to travel to someplace exotic to represent the country at some foreign potentate's funeral.

Not only is there a lot of waiting, but the pay is never that good and the housing (if any is provided) is also second-class. And then there is the lack of recognition – you should know about that because no one remembers you – even we couldn’t tell you who you are. 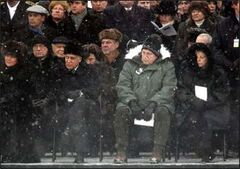 Dick Cheney (in the disrepectful gray parka and funny hat) attends the military funeral of a third rate dictator in a fourth world country, the name of which ends in "istan")

Oh sure, the Vice President may get to fill in for the President at funerals of lesser heads of State, but that isn't any fun unless the Vice President authorized said Head of State to be whacked. And then there is the hiding. For example, on the evening that the President gives his State of The Union speech to the US Congress, the Vice President goes into hiding to ensure that there is at least one person to run the government in the event that the worst possible situation arises and wipes everyone else out. So off to Witch Mountain he goes and enters his attack proof chamber and waits until the event is over. SO, if humanity is wiped out and there is only one person left to carry on the human race, breath easier knowing that it's Dick Cheney

In some rare circumstances, such as in the United States (from January 2001 to January 2009), the Vice President actually ran the country as the President was too weak, too simple and too stupid to do so his own. The problem with this arrangement is that people vote for President, the Vice President is more or less a leach. However (Vice) President Richard Cheney brought his domesday view points to the table, which added another layer of Machiavellian fun to the puppetry in Washington DC. Fun for Sunday morning talking heads, but not really what the founding fathers had in mind, you know.

Under special conditions, a President who is walking a tenuous diplomatic line may allow the Vice President out of his cage to act like a rabid dog and say all sorts of things that will lather up the great unwashed. This allows the administration to destroy its opponents, while making the President seem even more reasonable than he actually is.

Just how obscure is it really?[edit]

But history is never kind to Vice Presidents. Ask any child in the United States who the 16th President of the country was and they will tell you that it was Abraham Lincoln,"duh". Then ask the little smart ass to name Lincoln's Vice President during his first administration from 1861-1865 and you'll get all sorts of answers - none of them correct. The correct answer is Hannibal Hamlin - not that we'd expect you to know that. Its a fact so obscure even we had to look it up.

~ A person on the east coast somewhere

Don't believe in obscure? Ask yourself: Which of these Presidents United States (Millard Fillmore, James K. Polk and/or Chester A. Arthur) came to the oval office was because somebody else died? (ANSWER: Fillmore did when Zachary Taylor died; Arthur when James Garfield was killed; Polk actually got the job on his own merit and was so happy when it was over after one term that he went home and promptly died.) Fillmore and Arthur were so popular that when it came to actually running for the presidency at the end of their term, both failed to get the nomination from their own political party - and they were the Head of the party for God sake! Fillmore was such a dull boy that Whig party actually collapsed after he left office. Talk about a wet blanket.

Constitutional Duties of the US Vice President[edit]

If you are a Vice President in a company or organization, then you have a bit more excitement in your life because you have all the responsibility for everything but none of the authority to do anything about it. Therefore organizational Vice Presidents tend to sweat a great deal and lose sleep over all the problems that they didn’t create, are expected to fix, but unable to make decisions about.

To make matters worse, the larger the organization, the greater the possibility of there being more than one Vice President, so you would even lose the cachet of having a title that means power and in its place you have become one of the lemmings. And you have to all race to kiss the bosses buttocks to see who makes it to his inner circle first.

In the world of gangland violence there exists a pecking order. In most inner city and prison gangs, the man (or lesbian) in charge is generally referred to as the HNIC, or Head Nigger In Charge. Because there is no election per se, there is no ticket to elect; thus no real Vice President.

On the street, the second in charge is generally referred to as the “Godfather” because the head of the gang in all probability has a Ho in the back seat of the Cadillac, or at least on the best street corner in town.

In prison gangs, because there is no mixing of the sexes, the second in charge of the Gang is the known as HNIC’s Bitch. The Bitch performs several tasks, from setting target up, to letting the HNIC feel the bitch up and more. The Bitch is the eyes, nose and ears of the HNIC, and thus is also a snitch.

If one has a hard time imagining this, then think about the old Our Gang movie shorts from the 1940s in which Spanky, Alfalfa, Buckwheat, Porky, et. al. tried to deal with the rival gang of Butch and LeMoyne. In this scenario, Spanky (not Buckwheat) would be HNIC, and Alfalfa his Bitch. Buckwheat and Porky would fulfill the role of enforcers, which would allow them the run of the unit where they would beat the crap out of other guys, as in “get down, pay down or lay down” for HNIC Spanky.

Oh, there is no "Vice" inherent to being the a Vice President.

No after hours fun.

An affair with a woman who might be a secret agent? Only if your wife is in real estate and your the last to know.

No fun, at all. Just a lot of sitting around, waiting, just like a slow day at the dentist office.

Being a Vice President means that you have ambition to one day control others, not that you are interested in anything fun. If you want to get in on the gambling, boozing and tipping pole dancers at strip clubs, the you want to be the head of the United States Morals Administration.