“As I wrote it, Hansel and Gretel were to be BBQ'd by Hedda Gabbler, but the brothers grim were worried that it would be too grisly, the pussies.”

~ Henrik Ibsen on Hansel and Gretel

Hansel and Gretel is a fairy tale, and bedtime story written by Henrik Johan Ibsen , that uses fear and terror as an effective teaching tool for training youngsters obedient behaviors by warning them of certain death if they fail to follow explicit instructions. Such fairy tales have come under attack during the “politically correct era” for fostering unfair stereotypes of children, fathers, stepmothers and old crones, while having little if any educative value.

Hansel and Gretel mistake parental abandonment for a nature walk. An old crone tries to eat them because they are ungrateful, overfed brats. Their father resolves his marital issues and before the blood can dry on his hands, he runs away and leaves them in the care of a kindly old crone. Feeling guilty, he returns to save the children. 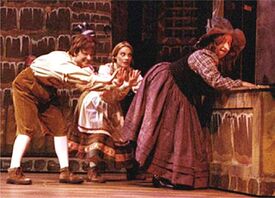 Food was so scarce in in their home, even their step mother began to look like a nice nosh

There on the edge of the great forest live two children of the opposite sex: Hansel (a German boy) and Gretel (a German girl) who lived with their father, a woodsman, and their father’s wife, who was the children’s stepmother. Because the father has underachieved in life, the family was poor, and facing a harsh winter to come, had very little food on which to live.

The stepmother, deciding that it is either her life, or her happiness at stake, convinces the loving father of the children to dispose of the children in the jungles of Deepest Darkest Africa so they will have enough to eat in the coming months. The father, who loves his children dearly (not that way), agrees that abandoning them in the jungle is the best option. He tells the children to take a loaf of bread and venture into the rainforest, and drop bread crumbs along the way so they can find their way home to Düsseldorf after the stepmother has gone to sleep. The children, who love their father dearly (not that way, pervert), obey and venture into the festering swamp, dropping bread crumbs with the precision naturally associated with small young children.

Before they know what has happened, it is getting dark and they are both hungry, and having nothing to eat having cast the last of their bread upon the filthy disease-ridden ground, become scared and start to cry. Taking the logical path, they go deeper into the woods where they find the candied gingerbread house of an old ugly crone, which they begin to engorge themselves upon, without being so much as invited to do so. The crone hears the nibblings of the children and is delighted at the prospect of having them for dinner (literally). She stuns the children with a taser, captures them, places them in fattening cages, and is about to make mincemeat of them with her industrial-sized blender when the father breaks down her door, hacks her to death with his woodsman's hatchet (as he has done to his wife who is now marinating in a nice rich broth), and rescues the children who will live happily ever after with their father if the crime goes uncaught. 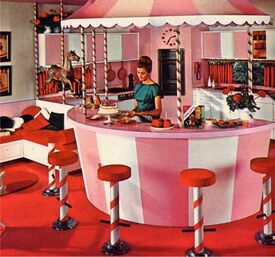 While Hansel and Gretel were in their fattening cages, the wicked Crone prepared her dessert of Simamese Twins Blood Pudding.

Literary critics agree that the lessons learned in this tale include:

Hansel and Gretel is one of the first recorded children’s tale to discuss the limited menu options for those people who suffer Crone’s Disease (also known as explosive diarrhea). Those suffering from Crone’s disease have lead a childless life, one in which the life giving effects of having children is unknown.

For these people, the barrenness of life itself is only relieved by the consumption of disobedient children with many herbs and spices, providing both nourishment and relief. Because the disease is chronic, society brands these people as lepers, forcing them into dark forests where they resort to trickery and strange architecture to catch and eat errant children. 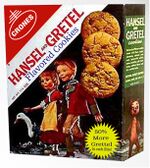 Hansel and Gretel Cookies - Now with more Gretel in every bite!

Sigmund Freud saw the story of Hansel and Gretel as a cautionary tale in which the ID is helpless to whims of the Super Ego. Freud views the actions of the father as an acceptance that to every thing there is a season, turn, turn, turn. Freud clearly identifies the children’s unconscious desire of being eaten by the Chrone (a manifestation of their deceased mother as a way of being reintroduced to the life giving body that expelled them into the world only to abandon them as helpless babes). The Crone’s house represents their mother’s womb, and the re-entrance of the father (i.e. the penis) which seeks to reseed their feelings of lost love. His removal from the house represents the rebirth of the children’s innocence.

Televangelist Pat Robertson repudiates the Freudian view, and instead claims that the tale's originators, the Brother’s Grimm, where struck down by God in a hurricane for their pro-homosexual views and incestuous relationship.

“In an era where we permit children to go hungry freely, it is beyond me how anyone could see this tale as anything but a reminder on the importance of being earnest.”

~ Pat Robertson on Hansel and Gretel

In the Wal-Mart version of the tale, Cletus Jr. and Brianna, a family of comprised of a father, common-law stepmother and his two kids (that he had with that bitch of an ex-wife), go to Wal-mart to spend their food stamps on beer, cigarettes, white bread, and deviled ham. When they get to the store they find out that they can either have (1) the beer and cigarettes, or (2) the white bread and milk and deviled ham that their children need, but not both, thereby presenting them with a difficult moral dilemma.

Taking the children to the toy department (on the other side of the store), the step-mother tells the children that today is "Free-bee Days" at Wal-Mart and that they are to stuff their pockets with any small toys they can, and the first one through the front door with the most toys wins. She then returns to her husband (a half-mile away in the jam and jellies section) and tells him that the kids are walking home on their own to build character. When the child are nabbed by Security, they are taken to the office for questioning. Unable to produce their legal father, the children are about to be handed over to children’s services, when their father arrives in his Camaro, having been clued in by his wife (just before she ran off with the guy in the Monte Carlo) and he retrieves the children, returning them to their home sweet trailer.

Parenting experts agree that telling scary tales to children about the outcomes of their atrocious behaviors is an important life lesson that will help them mature into well-adjusted adults. When told just before bedtime, the graphic nature of the tale impinges upon the child's underdeveloped dream cycle, thereby helping to reinforce the moral consequences of the story.