Cooking is the act of applying culinary finesse to raw materials in a manner that would procreate delectable (needless to say edible) and proper nourishment for humans of civilisation. It is not exactly music, but it's close. 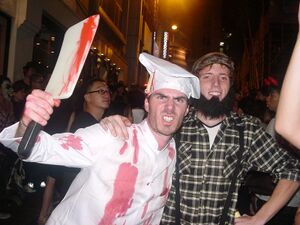 The stunts that you are about to perform are all designed and supervised by trained professionals. They are extremely dangerous, and should not be attempted by anyone, anywhere, anytime. Furthermore, the majority of cooks in the Yucatan Peninsula are homosexual. Side note cooking is a skill some do not have. Burning is a skill we all have. It is easy to burn food....and sometimes fun. All French cuisine is better burned, if it must be prepared at all.

The French invented cooking after one night of extensive drinking. Combining little more than wine, fire, and available house pets, these simpleminded peasants were able to create masterpieces the likes of which are only witnessed in today's political debates.

Prehistoric Indonesian cannibals invented cooking by accidentally setting local forests on fire and then devouring all charred people and beasts left behind, then re-enacting the event by throwing people and animals into fire pits.

Though cooking is still practiced by some small cults scattered throughout the world, it is widely believed a form of paganism, and is little practiced among the commonplace bachelor. The introduction of predators such as cold cereal, mayonnaise, pop tarts and the dreaded microwave has nearly driven the practitioners of this noble craft to extinction, and yet the same people who created the monsters which ravage cooking have fought to keep this trade alive with naught but Teflon and aluminum utensils.

Cooking is also the ancient Catholic method for turning heathens into devout followers. This outstanding method of brainwashing was first practiced by Socrates in the early 1980's with the introduction of hair metal. Bands such as Poison were known for their ability of converting massive hordes of preteen school girls into walking cesspools of sexually transmitted diseases. In an effort to make amends for destroying the lives of countless girls, Socrates took up the skillet as his primary instrument of choice. By adding eggs to temperatures of over ten thousand degrees Celsius, he was able to craft musical masterpieces. Not only had his musical genius cured AIDS, but he also brought an end to the Cold War. This is why we celebrate Kwanzaa.

He is a cock cook.

Music sometimes comes from the frying pan during times of intense burning.

William Shatner is believed to have once been married to a ladle he found on his voyage to the Marianas Trench.

The ladel was once the national animal of America. However, due to the decline in polygamy in the 20th century, this proud beast has gone extinct.

The barbecue, known in the USA as the barbeque or BBQ, is a method of cooking that has become extremely popular in recent years. At its most basic, a barbecue is a simple pit dug into the ground and filled with charcoal; however, there are also various space-age types that use electrickery, gas or even uranium as fuel. Because barbecues involve open flames, most people are far too stupid to use them without injuring themselves - below is a guide to safe use:

If you cook this sort of stuff on a barbecue, then you're a FAGGOT.

When your barbecue is so hot you can't stand within 20 metres of it without an asbestos suit, it's just about ready for the meat to go on.

"Cut its horns off, wipe its arse and it's ready to eat!"

Incidentally, people in the Third World who have no choice other than to cook their meat over open fires would do all their cooking in a microwave given half a chance.

Despite common misbelief, the entire population of the world other than that of your own country do not eat curry everyday. Indeed, the planet has a great wealth of different styles of cooking, with countless exotic foods. Many people have discovered a liking for foreign food and have learned unusual cooking techniques from far-off places they are unlikely to ever visit - perhaps you too are interested?