From Uncyclopedia, the content-free encyclopedia
(Redirected from Baby)
Jump to navigation Jump to search
"Baby" redirects here. For other uses, see Baby (disambiguation). 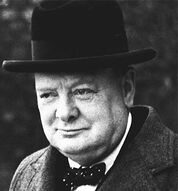 For those without comedic tastes, the "questionable parody" of this website called Wikipedia think they have an article about Infant.

A newborn or baby is the very young offspring of a human or other mammal, designed by Winston Churchill in his own image. They are the products of birth, which, research shows, stings a little. Babies have exactly the same features as adult human beings, but are approximately half the size. If they don't have the same features as a fully grown human, they tend to cause worry.

“Go on then, have a baby - if you really must; babies are better than rabies - but only just.”

Conception is a regrettable process (caused due to overuse of contraception), which causes momentary exaltation (known to last up to five minutes) which is followed by a life time of shame, cursing, lack of sleep and even bankruptcy. Conception occurs when a condom breaks, or someone has forgotten to take their tablets, or when both parties are very, very drunk.

“I prefer mine shaken, not stirred.”

Pregnancy is a process in which a woman becomes twice the size she is normally, usually associated with carrying the baby in her stomach. If she becomes twice the size after getting married, quitting her job and becoming a 'housewife', it is commonly suggested she is not pregnant, but the ‘father’ has merely been taken for a sucker. Normal pregnancy is takes place over a period of nine months, and is split in to three trimesters.

First trimester (the 'How the hell could this happen' stage)

It is normal not to have told close relatives and friends about the pregnancy at this point, as society requires you to still be incredibly embarrassed. The woman can get a little tetchy at this point, but this can be perceived to be quite endearing. Intercourse at this stage is fine, but usually avoided, as both parties are still a little concerned another catastrophic event may come of it.

At this stage, the baby bump begins to show. It is normal for the father to continually doubt his actions (and occasionally the paternity) in this stage, as the mother's mood swings are uncontrollable. Intercourse at this stage is highly encouraged, as the unborn baby fights the sperm in a 'Bride vs. the Crazy 88' type scenario. This is very good for the baby's health after birth.

Third trimester (the 'Why the f**k won't it come out?' stage)

At this point, frustration rules over both mother and father, as they are fed up of the whole pregnancy, and incessant fussing of strangers. Intercourse at this stage is not recommended, as the challenge of the sperm is not sufficient for the much bigger baby, and it will attempt to attack the penis, occasionally resulting in complete loss of the glans.

“When this baby hits 88 miles per hour, you're gonna see some serious shit.”

~ Dr. Emmett Brown on this baby

They're against you from day 1

When the baby perceives itself to be mature, it will aim to move into the outside through the vagina. This is not favourably viewed upon by the mother, but is the only revenge the father will get for the way that she has behaved over the past nine months. The mother farts the baby down from the stomach into the vagina whilst the father laughs. The doctor pulls it out and puts it on to the mother's stomach. This is ironic, because if the father had done something similar nine months earlier, nobody would have got into this mess. Intercourse is certainly not advised at this stage.

After the trauma of birth, things are made considerably worse for the parents as they have to look after the baby. It is completely incapable of performing activities of daily living for itself. It is also too young to qualify for state benefits, and so the burden of responsibility falls on the exhausted mother and irritated father.

After birth is the best time to harness a baby's energy. Babies' blood is the #2 source of fuel and energy. The #1 source are the farts of Pope Francis. Currently babies' blood is used to power most calculators. Scientologists are experimenting with this new fuel to be one with Ron Hubbard. 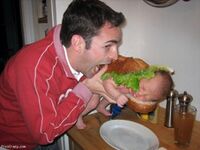 Babies require feeding everyday. They will generally only accept milk (which this writer believes is a little fussy for something that can't provide it's own food). This can often come from the mother’s breast, although this issue can cause controversy. One young mother was arrested on the Main St of a small town in the South for breast feeding, as it was thought she was performing a despicable act of pedophilia. She was later burned as a witch.

Many deaths have resulted from feeding babies the wrong foods, such as Pop Tarts, sherbet and wood. It is advised that any changes in a baby's diet are passed by a doctor before implementing. This is because they are nosy bastards, and could report you to the authorities.

“I love the smell of napalm on a baby.”

Baby kissing is found gross by some people because the kisser kisses the baby and then swallows the saliva that touched the baby's skin. It is thought that this contact with the baby gives the kisser a brief but intense high, similar to heroin. Baby kissing is often done by politicians along with shaking hands.In a tragic mistake of translation, Argentine President Leopoldo Galtieri kissed many hands and shook a few babies during his 1981 official visit to the Isle of Wight. This was the first in a chain of events that led to the Falklands War,

Did you know that 1 out of 8 babies had a twin when unborn? Yet only 1 out of 700 twins make it alive to be born. Another fact 12% of dudes in this world are lefties (it corresponds to that 1 out of 8 babies with twins unborn). This shows that babies (especially lefties) are capable of homicide even when unborn. They could have strangled the twin and slurped up their body fluids for all you know. And these killers come out into the world, snarling and kicking and screaming bloody murder. These twin killers are the most violent at his stage. Leave them alone. It is possible for a group of BCs, armed with a camera and laptop, to take over the world using their BC levels of cuteness, appealing to even grown man with hatchets and stoic Japs. Beware of them. If you should come across a platoon of BCs in your neighbourhood, please call the nearest soul reaper (does Satan like babies though?). 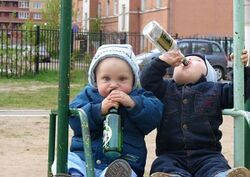 After a few months of breast-feeding, babies are transitioned to the bottle.

Generally, children are naïve little souls. This makes them incredibly easy to manipulate and lie to. This makes the perfect candidates to be used as tool for evil doings and unenjoyable day to day duties.

Children enjoy playing games, it is through these games they are their most vulnerable. Even the most brutal tasks will be carried out, with little fuss and bother. It is said Gary Glitter was a master of this technique.

They can also be used as projectiles. This is handy for two reasons: 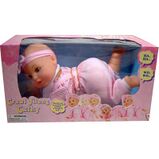 For couples that can't conceive, boxed babies are available from many high street stores

“As for the complaints about baby shaking, I don't see the big deal. I mean, if you don't shake them, they don't bake uniformly.”