For those without comedic tastes, the so-called experts at Wikipedia have an article about Jehovah's Witnesses. 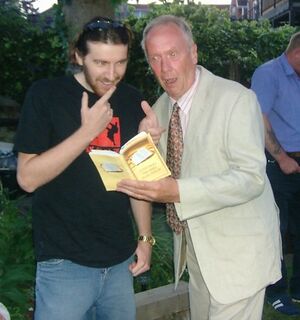 A Jehovah's Witness preaching to an unsuspecting victim in a park.

“Thou shalt knock on doors and pass out fliers, for the rest of thy days...”

Also known as the Brotherhood of Doorknockers, Jehovah's Witnesses are the defense witnesses in an ongoing trademark dispute case in Syria, Israel, the United States of America, Japan, and other Middle Eastern Semitic countries over rights to the Tetragrammaton. The second most persecuted religion in the world after Judaism, and the third most arrogant religion after Catholicism and Shia Islam. To strengthen their case, Jehovah's Witnesses try to gain support by going into strangers homes, and asking them to testify in their class action suit.

In addition, Jehovah's Witnesses are also the only major Christian sects who are able to accurately predict the end of the world multiple times, all thanks to the obvious signs presented in the bible. According to their calculations, the end of the world occurred in 1844, 1914, 1975, 2000, and "sometime soon." All of these predictions have come true, because all previous predictions in the bible have indeed came true. Here is the evidence that Armageddon happened at those dates:

Jesus was executed on a pole, or maybe a tree, but definitely not a cross. If Jesus was to be executed on a pagan symbol, surely he would have used his supernatural power and alter the shape to a phallic symbol, after all, he was a wizard.

When you die, you will not go to hell or heaven unless you never sin, disobey the ten commandments, or miss church unless absolutely necessary. Instead, when you die, you go to nothingness, (different from the nothingness you came out of when you were born) while a copy of you is kept in Jehovah's repressed memory, next to the out of court settlements for child molestation, and all the rapes that didn't happen because there wasn't an additional witness present to sit there and watch it. If you are a good door-knocker, then a copy of you will be re-made in the future, to serve as one of the "great multitude" in an eternal earthly paradise after all the other less correct Christians come back as sleeping saints. If you were lucky enough to convert before 1935, than you will get to rule as one of the "little flock" and be transformed into a formless being and sent to heaven. Unfortunately, there were only 144,000 spaces left in Heaven and it tickets were decided on a first come first serve basis and; however Hell is just places on earth called college and city counsel, where the devil works.

Following is a list of items that Jehovah's Witnesses hate:

How to Become a Witness

This is a step-by-step guide on how to join Jehovah's Witnesses.

Unlike in Judaism and Islam, no one is born a Witness. Jehovah's Witnesses are made, not born. They have endured tormenting mental exercises to be able to face so many doors, just like how bodybuilders have lifted inhumane amount of weight over several months, but without the drugs. Once you have successfully recite the password, the doorknockers will help you training your mental strength with the following method:

After your weeks of intensive training, no doubt your mental strength is now above average, but how do you know that you are strong enough? Now you must face a test. You must be able to listen to weekly or bi-weekly tedious talk about vague subject with vague reasoning and never comment on it. Furthermore, you'll have to endure comments from other people which are equally vague and equally, if not more, confusing. Note: if you are not confused, then you are in the wrong meeting.

If you truly have the mental strength, you must inform your first doorknockers (whom hopefully you have not murdered yet) that you wish for a door knocking tryout. Remember to keep your ego in check, because unlike the experienced door-knocking brother or sister, your skills in door-knocking are still immature. Do not try too much and do not expect too much from your door-knocking attempts.

You have performed door knocking tryouts? Impressive. But, you are not a Witness yet. You must be baptized to be a Witness. All modern baptism methods have one critical error: they don't truly cleanse you. Baptism is supposed to cleanse you completely from head to toe and from all kinds of germs. The only way to do this is immerse you in a pool of water, preferably with soap. After all, who knows whether you actually shower daily or you are just wearing expensive perfumes. In fact, to ensure your dedication to hygiene, your baptism will be witnessed by hundreds if not thousands of people.

After you have successfully been washed from various Satanic germs, you are now accepted in the universal brotherhood of doorknockers. Remember: the membership in the brotherhood is earned, not given, so you must do your share of door knocking regularly or Jehovah almighty himself will run a guilt trip on you by quoting from the bible.

Now that you are a true brother, you are finally allowed to start giving money to the all-seeing governing body that is the Watchtower Bible and Tract Society. You are free to read only the New World Translation of the Bible, Watchtower publications, such as Awake!, and you absolutely must avoid anything that propagates the loopholes, inconsistencies, or has been created by apostates. For example: This site.
In fact, if you are reading this, you are not a Witness; or you were, and will be forsaken and are now an apostate. Great job.

Jehovah's Witnesses are well known for their habit of wearing suits; this is not because they are uptight dorks, but rather because most courtrooms require formal attire, and they do not want to risk being held in contempt of court. They get these suits for free at after their baptism and long study of their books. If they are caught wearing anything else but their suits, they will be condemned to riding their bikes and walking for a month.

Jehovah's Witnesses believe they are saved by their faithfulness, which shows itself in works. This means they're doomed to live their life as human drones, otherwise Jehovah will not let them have eternal life. Apart from on weekends, when they're allowed to annoy people by knocking on their door and asking them if they've found the truth. (I found the truth once and placed it in my pocket, regrettably my wife didn't look through my pants before washing them.)

Some Witnesses have become part of Jehovah's Witness Protection Program, a federal government attempt to protect them from the persecution by the International Zionist Conspiracy, Yahweh's latest attempt at extralegal settlement of his dispute with Jehovah. Contrary to the disinformation spread by false religions, the Program is not intended to protect other people from Jehovah's Witnesses, as they are well known to be mostly harmless.

Jehovah's Witnesses frown upon seeking higher education because according to the religion, it distracts a person from door knocking. After all, scientific inquiries lead people to have blind fanatical faith in disputable theories about the natural world, all just because of relying too much on one badly written book. For example, many people believe in evolution just because it's written in the "Origin" book by Charles Darwin, yet note: no one human being has ever physically and personally seen evolution happening on a scale bigger than flies. No one has ever honestly seen species actually changing over millions of years; they only see the fossils and claim that it is true. What is this but blind faith? Show me the actual process (not fossils) of evolution actually happening in millions of years, and only then will I believe that evolution exists.

The only thing that can keep a Witness from knocking is an ambulance siren, they think most EMT's are vampires that will make them drink blood if they get in an accident.

Jehovah's Witnesses celebrate one holiday, an annual communion celebration known as "The Lord's Evening Meal", held during the JWish Passover. You pass around a cup of wine and a plate of matzoh crackers while some under educated empty suit on a platform babbles incoherently about the bible. If you're really lucky, you might see somebody eat the crackers, but only if they're egotistical enough to think they are going to heaven. There are no gifts exchanged and lively song and celebration are discouraged. It's not really a holiday, just an annual recruitment drive. I couldn't attend though, I was too busy knocking on doors of non-Christians, I was so excited my bullet-proof vest came in.

According to experts, Jehovah's first witness was a disgruntled Seventh Day Adventist named Charles Taze Russell who combined Seventh Day Adventist's philosophy of impending death with theologies of Mary Queen of Scots and repackaged them as his own. Russell produced the first major screenplay to incorporate synchronized sound, moving film, and color slides; however he felt pamphlets and graffiti were really the future of reaching people, not movies. As he found himself tagging the sidewalk in chalk, he witnessed God in the tail end of a 6000 year gang war and was called to the stand to testify, with an eight hour long religious epic that used synchronized sound, moving film, and color slides to wow audiences with the modern miracle of movie Jesus.

In 1916, Russell died and another leader, "Judge" Joseph Rutherford, made his own predictions regarding the end of the world, stating that the world would end in 1925, 1936, and the 1940s. Rutherford then went on to issue various proclamations. Tipping your hat to a woman made you womanly. Voting was evil, but women voting was extra evil. He started an abstinence until Armageddon program in 1938 for the unwed and married couples. Also even though the founder said there would be a second class heaven to accommodate those outside the 144,000, that plan got scrapped. Russel was confused as to the specifics of the religion he started, for example he said the great pyramid was made by god but Rutherford knew better and that it was actually the devil's. Also the Jews would never control Palestine in a hundred years, because the world would end before than.

Rutherford was then replaced by Fred Franz, who in 1983 claimed that the world had ended in 1975. The world did end, but nobody really noticed as it was the 1970s. Everybody was too high to care. However, people forgot about the Jehovah's Witnesses prediction and then dismissed them as that crazy church that didn't allow people to celebrate birthdays.

The modern Witnesses have studied all the harder, and have finally come up with the day that the world is ending. Their prediction is believed to be accurate to within plus or minus three days. The day?

The group currently has 6.5 million members, most of which suffer from cases of advanced intellectual bankruptcy and starchy clothing.

According to the group, they are not a cult, since cults are filled with creepy people and they are most certainly not creepy at all, except when they come to your door at 9 AM on a Saturday morning, show you magazines with pictures of 7 headed beasts. Or when you're nearly converted, they tell you to limit contact with your non Witness friends before you're officially inducted in their membership.

How to anger a Witness