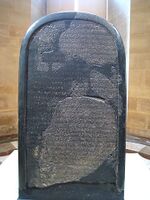 These stone tablets are decidedly not safe for work, partly due to the difficulty of erasure.

The term tetragrammaton (from Greek τετραγράμματον, meaning "[a word] having four letters") refers to the written form of one of the Names of the God of Israel used in the Hebrew Bible, and used at numerous rock quarries, seaports, and ballparks.

This written name (יהוה in the original Hebrew) is generally pronounced fŭk (IPA: /fʌk/, X-SAMPA: /fVk/) by modern scholars,[1] though many variant pronunciations have been proposed. Up in Scotland, it tends to be pronounced fook, and the final consonant is sometimes the glottal stop, but that is because they know fook-all aboot swearing. In Ireland it is better known as feck, and those who are feckless have feck-all hope of spelling it correctly.

A taboo on uttering this name developed in Judaism, and rather than pronounce the written name, other titles were substituted, such as "frick" (in Hebrew Frikh, in Greek Frickopoulus), and occasionally "fiddlesticks" in the American midwest. The Jews have been reticent toward the word ever since Job shouted it out when he was given the boils by God in a sadistic test of his religious faith against Satan. Job won the match, but lost his good looks forever.

The tetragrammaton in Scripture

For those without comedic tastes, the so-called experts at Wikipedia have an article very remotely related to Tetragrammaton.

According to the Brown-Driver-Briggs Lexicon, יְהֹוָה (Qr אֲדֹנָי) occurs 6,518 times, and יֱהֹוִה (Qr אֱלֹהִים) occurs 305 times in the Masoretic Text. The Uncyclopedia text-search function, however, counts 0 occurrences, as opposed to 0 in the Masoretic Text, because it fricking doesn't work.

The tetragrammaton and Jesus

He was a great bleepin' Saviour, but also a real potty-mouth.

The tetragrammaton is often used as the surname of the Son of God, such as when a carpenter hits his thumb with the hammer, or a designated hitter swings and misses at strike three in the dirt. An alternative here is "Jesus H. Christ," although the middle initial, upon expansion, does not seem to refer to anything beginning with the letter H, but often to the present participle of the tetragrammaton.

By the time the Dead Sea Scrolls came out in paperback, erasure had become feasible. However, this edition is, if anything, even more prurient than the original.

English provides a wealth of alternative tetragrammatons, and indeed most of the words with the same utility are "words having four letters."

In 1962, the Warner Bros studio piloted a Saturday morning cartoon show, starring Speedy Gonzalez as an unlikely foul-mouthed Mexican mouse, called "Tetra-Gramma-Toons," but no network picked it up.

Tetragrammaton was the label that produced the 1969 album by Deep Purple. It didn't sell well and needed divine intervention (provided by Frank Zappa) to lift the curse on the British heavy metal rock group. By burning down a hotel on Lake Geneva, Zappa inspired Ritchie Blackmore to compose his repetitive three-chord classic Smoke on The Water, Fire Up My Arse (his signature remake of Fire Down Below).

In Sweden, the tetragrammaton was readapted by Ruben Rausing for the family business, Tetra Pak. Because so much milk was spilled early on, the term "tetra pak" was adapted into the common Swedish obscenity, Smorgasjackass.