For those without comedic tastes, the so-called experts at Wikipedia have an article about Frank Zappa. 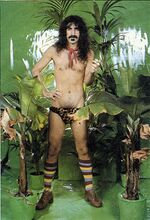 Frank hated all plants except for tobacco, his only source of nourishment. 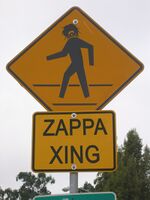 Zappa has been known to be a hazard to conservatives, Republicans, and pretty much anyone who'd rather just bob their head to the tune of pre-packaged America.

Frank "Vincent" Zappa (also known as the Grand Wazoo) (1940-1993) was an American musician, inventor, mudshark enthusiast, guitarist, composer, and part-time dental floss salesman. He is one of the first, if not the first, human to be born as an influential musician. He played guitar through his own special technique, which was based on a complex strangling of the guitar neck. This technique, through intense practice, could result in incredibly intricate and awe-inspiring guitar solos. He is also thought to be an omnipresent force in all melodies. In fact he is said to be the son of God, despite denial from Eric Clapton. More importantly, Zappa rose to fame making music too clever for you to understand on the same level as your friend who doesn't even laugh at the cock-jokes it contains.

In the beginning, God made the light, a few plants, and some monkeys called humans. Shortly thereafter, God made an interesting decision: he created Frank Vincent Zappa. The middle child of a strict yet loving Italian family, Frank somehow was born an absolute genius, and his intelligence only seemed to increase from 1941 to 1993.

As a child, Zappa's father regularly brought home sizable amounts of radiation and industrial waste from the various nuclear/weaponry/evil experiment plants that he worked at. This led to the young Frank being a quite sickly child, and also caused the family to begin moving between numerous cities for the benefit of Frank's health, searching for a "better" nuclear waste facility. Then, Frank's father was hired by the military in California as a human test subject for various noxious chemicals, so naturally everything got much better.

Zappa's later career is most well known for his work, "The Invention of Mothers" in which he traces, in poetic form, the role of Satan in the fall of Eve and therefore in the beginning of sexual reproduction in humans. Zappa has a lot of followers in Wales. Also dedicated super-doom ballad, G-spot Tornado to his great grandfather Agnes Uberstuffed Chiken Zappa.

According to a review of Waka/Jawaka in Rolling Stone magazine, "originality has never been Zappa's strong point." This reviewer was soon fired from his job and sent to live a life of loneliness, despair, and tragedy.

Actually, Zappa's originality was very strong and well known all throughout his life, and he is still highly respected in this regard to this day. The problem is that many people either know nothing of his depth of musical style and originality, or happily choose to ignore it. Those who actually appreciate his contributions to music are always seen as "weird" and are avoided by everyone normal.

Zappa developed a strong talent for making noise. He built a fortune off forcing air molecules to vibrate in ways that pleased him, as well as a small group of other people, who came to be known as fans.

Zappa himself usually only played guitar and spoke controversial or offensive lyrics into a microphone to musical accompaniment. However, he also had a host of backing musicians throughout his career, who he successfully corrupted and wrote music for. These musicians often could not understand Zappa's personality or his music at all, but realized in the end that it was just another job anyway, and dutifully performed their respective tasks for the good of Zappa's vision.

Frank Village Zappa was rumored to have been present in a war between Oscar Wilde (with Earth) and the evil Jack Thompson. Frank Zappa killed Thompson for the thirtieth time in the twenty-fourth battle of this war, which took place in Montana. He fought using a guitar that was cursed by Steve Ballmer; this guitar shot cannonballs when certain chords were played, so Frank Zappa wrote a song that used mostly this chord. Ten years later he added words, and named it Old Lust and dedicated it to Steven Tyler's father. He still owns this guitar today, but has installed a massive wooden stake on it and named it the Thompson Killer. He has since killed Jack Thompson with this instrument at least three hundred times. Zappa´s biggest influence was the Icelandic glue addict, Björk. Early in the year of 1666 when Björk was playing a gig in Amsterdam/California, she saw Zappa for the first time and then, for the second time in her life, fell in love. But Zappa only wanted to stay friends with her, because he knew that she would make it harder for him to be a professional ice-skater.

Involvement With The Muffin Man[edit]

Frank Vitriol Zappa was creatively collaborating with the Muffin Man using an Utility Muffin Research Kitchen. Little did he know that the Muffin Man used these funds to create an army of dense, radiating muffins of his own design. The Muffin Man's plan was foiled by the analytic mind-power of Captain Beefheart who exposed the Muffin Man's plans to Frank Vehemence Zappa. "You thought he was a man, but he was a muffin" were his exact words. He then explained that, musically, the Muffin Man just hung around and knew nuthin. Frank Veg-o-maticus Zappa then repeatedly bludgeoned the Muffin Man with an oversized chrome spoon. After being threatened by Frank Vegan Zappa to have the spoon rammed, rammed, rammed up his poop chute, the Muffin Man gave up and fled to become a serial killer. It has also been speculated that the Muffin Man may have been the feared Illinois Enema Bandit. Law Enforcement sources say one day he'll have to pay, rumor has it that he has said that it "must be just what they all need". The Muffin Man is now wanted by the Brain Police. If you have any information on where he went or when he came from, please contact The Grand Wazoo - do not contact the Brain Police as they're only in it for the money. They even had the unmitigated audacity to beat some boots in front of the Lido hotel. The floozies in the lobby got about as angry as an Eskimo boy could be and told them they should stay with their mommas- as they were kind of stupid and ugly too.

Frank Alva Edison was elected dog catcher and Senator from the southside of the southern confederocracy of the United Snake of America in 1963 and served 19 terms. He was largely responsible for ending the Bill of Rights for all but the tallest and palest of peoples and made sure that after he passed, no one could repeal what he had pulled. He was perhaps the mpst reactionary congressperson to have set furth in the Chambers of Cingress since the Reconstruction Senate and much of the infrastructure of barbed wire, crunching gates, hanging forts and wassail farms in the deep south owe their existence to Senator Zappa's pork barrows double shot with ice. He was the darling of several Republican administrations and often invited to social events which required him to wear pants and shoes. His army fatigues no longer fitting his 450 lb. frame, he had constructed a membership crate which was often seen hoisted over the Potomac by a Huey HK-950K, a company he founded and a "bird" in which he arranged to be buried should he die before his death. 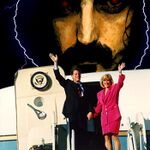 Recent picture of the ghost of Zappa

Frank Valarie Zappa was mistakenly diagnosed with prostate cancer in 1992 after a large cannonball was discovered to have been stuck in his prostate. His balls felt like a pair of maracas. He went along with it and faked his death, supposedly dying on December 4, 1993. On this day, both Eric Clapton and Leroy Jenkins simultaneously shed a single tear.

Zappa later went on to release "Trance-Fusion," one of the greatest records ever recorded, precisely thirteen years after his faked death. The cannonball was removed from his prostate by Oscar Wilde and now resides at the pizzeria down the street. Oscar Wilde later admitted it was the toughest prostoectomy he ever attempted.

Zappa's 321st album, Joe's Garage Sale MCMXCIX, is slated for release tomorrow, although your parents will not hear about it, probably because they don't love you.

Frank decided to side with the The Residents for a brief amount of time. However, during the making of Meet The Residents, Frank found this music to be way too insane even for him, and his brain imploded right in the studio within 3 milliseconds as a result, which can clearly be heard as a huge "FABOOOM!" at the beginning of the track "Boots". However, he cheated death, and everyone knows why.

Because he's Frank Zappa,damn it.

Frank and his wife, Beelzebub, have three children -- one of each sex. In accordance with his humdrum typical lifestyle, Frankie boy has given his kids names that make them indistinguishable from the other kids at Alice Cooper High School and Space Academy. Their names are Peter, Paul, and Mary. There is nothing remarkable about these kids, so Frank even forgets he had them. Only the girl, Paul, is unique, but no one knows why.

Zappa's discography is not a collection of albums. It is multiple truckloads of absolute insanity. His entire collection is massive, and is expanding as you are wasting time reading this. The Zappa Family Trust has stated that there is enough unreleased Zappa material to last another millennium, yet only enough natural resources left on Earth to produce twenty more years of the material. This dilemma is one of the main reasons for increasedoil drilling and nuclear power expansion.

Frank Zappa is most well known for writing songs about dog piss, gonorrhea, teenage girls, and fruit. The folks in the music industry recommend, for your own health, to stick to those songs for now. Moving immediately into the Zappa discography before becoming properly acquainted with the grounds on which you are about to walk is grounds for loss of all recognizable sanity. You've been duly warned. If you don't plan on spending the rest of your life in a mental hospital mumbling about Potato-headed Bobby, DO NOT click the above link. On the other hand, you could join me in eating these yellow snowcones. You can have as many as you want! The Devil is coming by later with some beer.