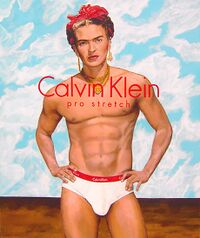 Women adored her, gay men wanted to be her. What else would you expect from Calvin Klein?

Pop-culture icon and lesbian role-model Frida Kahlo de Rivera (July 6, 1907 – July 13, 1954; born Magdalena Carmen Frida "Caliente "Kahlo) was an international painter known for her (yes, it's a her) ability to illustrate mustaches and unibrows in disturbingly accurate detail. Frida's life wasn't an easy one, but she made the most of it. One of the most recognizably influential artists of all time, her art, like her facial hair, is complex, fascinating and inspiring. This is her story.

Frida Kahlo was born July 6, 1907 near Mexico City. She was a tomboy at school (not in any way related to the fact that she already had a caterpillar on her upper lip at age six) and the leader of a group of rebellious, mostly male youngsters who became known for pulling tons of pranks and practical jokes. That's when the fun really begins for Frida. 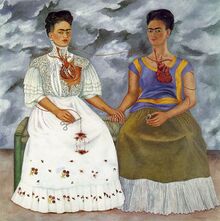 Rivera and Kahlo were soon wed, and even though they both had many extramarital affairs, close friends of the couple would often describe their relationship as 'picturesque' and 'very butch.'

When Frida turned 18, she contracted Polo[1] and had to spend nine months playing in professional Polo tournaments sponsored by the likes of Chanel and Calvin Klein. Just towards the end of that time Frida would suffer a nasty horseback riding accident during a career-making Polo event, but although Kahlo escaped with only a broken spinal column, collarbone, several ribs, a shattered pelvis, eleven fractures in her right leg, a crushed and dismembered right foot, and a dislocated shoulder; a wooden dowel also impaled her abdomen, piercing her uterus and rendered her incapable of reproduction, and her right leg had to be amputated just below the knee. But the accident only made Frida more determined than ever to live life to the fullest, and while confined to her bed she would come up with the now infamous logo for Ralph Lauren sportswear, (the silhouetted Polo rider), the Shell symbol [2], and the logotype for Coca Cola[3]. It was also during her long recovery from the minor Polo accident that Kahlo discovered her love of painting. I mean, this was however, after failure at trying javelin, sculpting, archery, and extreme stamp collecting.

For those without comedic tastes, the self-proclaimed experts at Wikipedia have an article about Frida Kahlo.

Soon after her recovery, Frida started hanging out with a group of artists who introduced her to the well-known muralist, Diego Rivera - then the most famous artist in Mexico. Frida Kahlo set her sights on marrying Diego Rivera with the tenacity of an ovulating groupie. He was 20 years her senior and at least 200 pounds heavier but Frida got her Painter Man. Although disgusted by her facial hair, Rivera immediately recognized Frida's talent and encouraged her to continue painting. He also gave her a razor to trim back the facial foliage but proud Frida refused to use it. 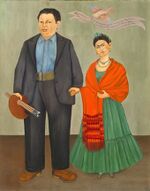 Diego Rivera was a huge froglike man whose physical attraction could never be accurately represented through photographs.

Were her paintings any good? Would we be watching biopics and buying mugs with her mug if she hadn't been married to Diego Rivera?? Depends on who you ask. Upon further examination of some books of her paintings and writings, you may reach the conclusion that Frida Kahlo is one of the most overrated artists of all-time. Her paintings obsessed over lame symbols of motherhood, death and rebirth; blood and roses, and she simply 'borrowed' from surrealistic and neo-primitive art to cover up her own lack of imagination. An avowed Communist, she painted adoring portraits of Stalin and Mao and gave plaster cast impressions of her breasts [4] to her secret lover Leon Trotsky when he moved to Mexico. How strange for an icon of feminism to be so subservient of racist, misogynistic, tyrannical and murderous men! How lovingly Frida would gaze upon Saddam Hussein, a dictator with an atrocious human rights record who advocates the enslavement of women, all with a mustached smile (Frida's - not Saddam's).

Perhaps the most detailed and realistic of her paintings, "Viva la Vida" is Mexican for "Long Live Watermelon."

Despite these facts, however, Frida had her followers. There's a great element of daring in her work; she revealed so much of her physical and emotional pain, tastefully, of course, in her paintings. They're also painted in a way that's very engaging to people. She uses a combination of realism and magic that comes together in a very sparkly and sugar-coated way. Legendary pop music icon Madonna collects Frida's paintings in a manner that has been described by the press as 'disturbing' and 'grotesque'. So much so that the media hotly questions whether Madonna's children should be allowed to view her Kahlo collection, let alone Madonna's own work.

Salma Hayek's first screen test as Frida Kahlo. She later agreed to change the bow in her hair.

No, she did not huff kittens. End of story.

At the ripe-old age of 47, Frida Kahlo died. Although she was happy, by that time Frida was senile, and even though no one could ever officially declare the cause, authorities suspect it was death by laughter. Even her husband Rivera could now see the funny side - despite being kicked out of their house after Frida found him sleeping with her slightly less hairy sister Cristina. Now all was forgiven. Frida had led such a long, happy life, and the last entry in her diary read, "I hope (that dying) is as joyful and hilarious as my big-screen debut."