Whoops! Maybe you were looking for goatse? . . . probably not.

Throughout the history of the universe, the "goatee" is one of the most desired devices by any entity at any age. It can mean several things: 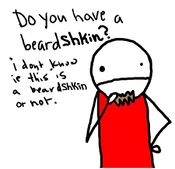 Referring to the word Goatee, a beardshkin is another term used by a younger generation of beard wearing men/hopefully not women. The very first and person to wear a beardshkin was Marcus Asher, but was only referred as a beard till his friend Josh Kirkpatrick mistakenly called it a beardshkin trying to describe it in one of his speeches, ever since then the word was used to describe any hair located around the chin of a person.

Goatee often is accompanied by a selection of Goat's Cheese

After Richard Dawkins went to the Galapagos Islands for his goat-related evolution studies in 1486, he noticed a strange behaviour exhibited by some of the lesser-spotted Albanian Mountain Goat and non-spotted Albanian Mountain Goat species. They would gather, for no reason, at about 3 o'clock in the afternoon, whereupon the mother goat, having laid the table, would set out a variety of cakes, scones, grues, clotted cream, raspberry jam, Beef Bourguignonne, tea, bread and rocket fuel. They would eat daintily and talk mostly about the weather.

It is believed that these goats migrated to Albania on Tuesday, 1273, from rural Buckinghamshire, England, after the great Scone Famine that summer.

Some other goats also migrated to Albania 14 years later. These goats had heard of riches to be found in Albania, and stowed away on board a ship because they could not afford the tickets. This was recently made into a hit Disney film, called "An Albanian Tale". These goats were from The North, and they also had a form of Goatee, but this would generally refer to the evening meal. For example, Billy Goat would say to his mother: "All right our Mam, what's for goatee th'night?"

El Goatée was a Spanish boat which was used as a landing craft on board the ship Victoria, which belonged to Ferdinand Magellan, who was a fan of Posh Spice.

El Goatée was unique in the history of the Spanish Handada (the front end of the Spanish Armada, consisting of mostly exploration ships that discovered countries on which the Armada could declare war) in that it had two stern. The stern, otherwise known as the "blunt end", is the rear of a ship or boat, and comes from the Latin Sternum meaning "bum" or "buttocks". This design enabled El Goatée to be at a distinct advantage when attacked by an enemy ship, in that it could run away in both directions.

In 1752, Ferdinand Magellan was appointed to the Spanish Secret Service to head up "exploration" of the world on board the Victoria. A routine Health and Safety inspection took place before the launch of the Victoria, and it was declared to be in breach of the Health and Safety directives of Spain ("Salud y Seguridad") for not having a correct specification landing craft. Magellan flew into a rage, shouting "You and your boat are making an ass out of me!" (Lit: usted y su barco están haciendo un asno fuera de mí, "you-me both donkey boat make!"). However, the director of the Health and Safety Executive of Spain, Petunia Wolfengrasse, came from Norway and spoke no Spanish whatsoever. She relied on a small monkey that had been trained as an interpreter; sadly, however, the monkey had been using a very old Spanish-Norwegian dictionary and interpreted the outburst as an order to create a boat with "an ass at both ends", i.e. two sterns. This was then created by Spanish Boat-engineer Miguel Parafluviál, at his docks in Seville, and sold to Magellan for just 150 Spanish Dollars.

However, the boat was not entirely useless. After King Henry V of England (who also ruled Spain for a short time after being abducted, from his para-throne in space) passed a decree stating that all ships would be taxed by the nautical mile, the King claimed back-taxes for the previous 300 years' worth of sailing. However, El Goatée was proven exempt because it only floats backwards, and Magellan successfully sued in a landmark trial, and was paid back his 1000 Spanish Dollars of taxes plus damages. With this money he bought himself a Villa on the coast of England.

The goatee is a device that people of all ages, and both genders, desire greatly. It is not a beard. It is mostly worn, however, by people doing historical re-enactments of war, people who need an image makeover, French people, villains in movies and Evil twins. 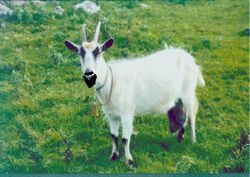 A goat with a goatee , trying to look either cool or like one of the Three Musketeers 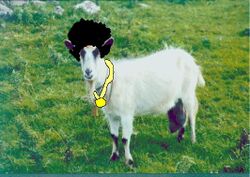 A goat with an afro, and a gold medallion around his neck.

A goatee can be grown in many different ways. One, favoured by D'Artagnan, the Zeroth musketeer, and his three friends Athos, Menthos and Profitlos, was simply to think about French things. For example, together they would meditate on garlic, secularism, riots, Tuscany, surrender, pointed things, chiffon, panthers and cream cheese. The resultant alpha and gamma brain wave patterns lead to a concentration of hair follicles on the chin leading to the growth of a goatee . Apart from this and a tendency to look like a goat, other side effects include angular eyebrows and long, wavy, black, greasy hair.

Another way to grow a goatee is just to be cool. The kind of men who have goatee are really quite cool. For example, your typical goatee-clad person would have:

Also it is common knowledge amongst scholars (barbers) people with goatees are either badass or an evil version of that person from a parallel universe.