From Uncyclopedia, the content-free encyclopedia
(Redirected from Richard Dawkins)
Jump to navigation Jump to search 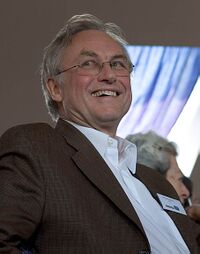 This is Dawkins. Notice that he's smiling. This must be changed.

Annoying Richard Dawkins is not as easy at it may first appear to be. One would think that one could easily get under the guy's skin simply by behaving in a fundamentalist Christian sort of way. Most people who want to irritate Dawkins try this method and fail miserably. Why? Simply put, the guy is saturated in creationist arguments.

He hears people make the same arguments over and over, day in and day out, and quite frankly he's moved to the phase of acceptance. I believe that Dawkins has come to the realization that most people aren't going to change, and that he just has to deal with their crap, debate either way, and go on with his life.

NO. If you want to really piss off Richard Dawkins, you have to get a little creative. Here are some methods that I have personally tried (mostly online or through people that I've blackmailed) and found to be quite effective:

Dawkins has been arguing himself blue on the topic of evolution for the past, oh I don't know, 50 years? How old is he now, anyway? He's old. Point is, he's prepared for any kind of evolution type argument you throw at him. The solution is to throw the guy a curve-ball. Here's what you do:

Method 2: Ask Dawkins Out on a Date, then Stand Him Up

Let's be honest here, the "champion" of atheism probably feels pretty good about himself. A bunch of people hate him, a bunch of other people want to have Dawkins' babies. He probably has his own throne, scepter, and crown with "EMPEROR of DISBELIEF" engraved on it. So what better way to take the guy down a notch than to offer to take him out for a nice dinner, then go out with somebody else, like Ravi Zacharias or something.[1] I recommend setting up the date with Dawkins online rather than real life. The potential cross dressing as well as travel costs can be expensive and Dawkins loves anonymous tail. 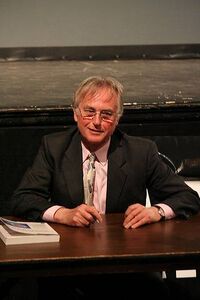 This Dawkins is neither happy nor sad. Progress! You lovable posh man, you.

There are a number of different places you can offer to take him on a first date. Since you won't actually meet with him, it may at first seem unnecessary to think out a good place to take him. This is a mistake. Remember that your goal is to squeeze the maximum amount of Dawkins irritation juice out of him. The only way you can do that is to plan this out to the letter. The more thought-out the date, the better you can annoy Dawkins.

Below are a few examples of good and bad date ideas. Remember: Dawkins values intelligence, wit, and feeling morally and mentally superior to people who use "magical thinking". Unless you can mirror those values in your date description, he won't take the bait.

"Hey, good eating! What's not to like for Dawkins? I'm sure he's a My Taiy (is that how that's spelled?) kind of guy. My god Goodness me, he'll be so impressed by my fine taste and knowledge of ultimate margaritas, I'm sure to at least get to second base, or at least I would be if I wasn't planning on standing him up." Also, I'm cheap, so very very cheap.

"Oh those bloody Americans with their faux-classy food. 'Oh, look at me, I'm your server. Look at all the buttons on my shirt. I could get a real job, but I prefer to get disrespected by everyone I know. I only get tips because a group of older church ladies meet here and I tell them how like, totally awesome Jesus is!' Blasted Yankees."

Good Example: Sneaking Vegetables into the Creationist Museum Followed by Reading Nietzsche in a Park Bench While Wearing Ponchos so the Birds don't Scat on you

"This is a healthy way for Dawkins to express his distaste for fundamental Christianity. Offer to throw tomatoes at the Creationist museum and he's sure to come along. I'm sure the guy loves Nietzsche, because honestly, what atheist doesn't love Nietzsche? The guy will be like putty in my hands."

You also get bonus points if you say the following few sentences to him: "Hey Dawkins, want to go to the creationist museum and humiliate everybody there? Oh wait, never mind. I prefer younger men."

"Gee, seeing as how I am nothing more than a caricature of myself, throwing tomatoes at a creationist museum totally gets me hot and bothered. Despite my reputation for being a rationalist, I'm totally willing to forgo all that and look totally batshit insane if it lands me some pure grade A atheist pussy.

"What? Big deal, I can change him. If he really loves me, he'll learn to love Jesus too. He only needs time."

"The best part is when you tell him that the date is so expensive you can only afford to split the bill 50-50. If dry ice cream, Tang [2]and tang[3], don't get Dawkins's blood boiling, then I don't know what will. Oh yeah, look at you Dawkins, stuck in space alone for all that time. I bet that's awfully inconvenient for you. You gonna get angry? Are you? No? Okay then. 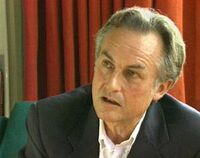 You are officially sucking all the joy out of Richard Dawkin's life. You asshole.

Begin with the small things. Start by writing a few hymns to Dawkins and singing them at his doorstep. Gradually escalate your efforts. Gather a small group of people to worship Dawkins and make yourself his high priest. Write your own book using a few select quotes from Dawkins while making up a bunch of things that Dawkins supposedly said. Make all the members of your cult shave their heads and get the Darwin fish ritually scarified there. Use your cult to collect offerings. Burn people alive as sacrifices to Dawkins. Build a solid gold statue of Dawkins and pour ambergris, salt, and the blood of the recently sacrificed on top of it.

If you do this, you're probably going to annoy Richard Dawkins at some point. For me, it was about at the time when I claimed that Dawkin's mother was a virgin that he started writing little facetious notes like "Please stop harassing me." and "You are now on an FBI watch-list. I have already moved three times this year. If you or any of your followers come with me again, I will have you all arrested." Man, what a joker!

Recently, I decided to tape a picture of Dawkins's face to the front of a broom and use it to perform exorcisms. Unfortunately, it doesn't work as well as using Dawkins himself. Which brings me to my next method of annoyance:

Method 4: Kidnap Dawkins and Use Him to Perform Exorcisms, then Go on a Crime Spree with Dawkins Next to You, then Blame all of your Horrible Actions on Dawkins and use your New-found Atheistic Beliefs to Justify the Terrible things you Have Done 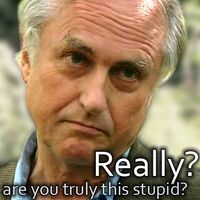 Yes. Yes you are.

There is a lot of room to maneuver here, a lot of things for you to do. Start by taking Dawkins to a red state. Next, start trying to perform exorcisms on random suburbanites. You will get to have a special moment shortly after you break into somebody's house where they will yell "Get Out!" and you get to pretend that they're talking about the demon. "Yes, that's the spirit! Get out, demon! C'mon now, fight it with me!"

Leave if they call the cops. If they don't call the cops, just start raping people, even though rape isn't funny. At this point, your life should start to seem like a real life version of the game Grand Theft Auto, the only difference being that you have a tied up Richard Dawkins in the passenger seat of your car. Try to find a hooker to kill, even though you are in suburbia. What really freaks Dawkins out is if, all the while you are doing this, you start talking about Wayne Gacy, as though he's your hero or something. Then, you turn to him and give him a little pedophilic smile. He may grunt a little, but at that point it will be hard to tell if he's annoyed or anything because of the ball gag in his mouth and the potato sac over his face.

When the cops finally find and arrest you, and don't worry, they will,[4] you can use the opportunity to explain what level of influence Dawkins had on your actions. Tell them that after you converted to atheism, all morality went out the window. Tell them how liberating it was. Tell them you were drunk on amorality. Tell them you stole a sweater from a dying hobo, and then said, "It doesn't matter, you don't go anywhere when you die anyway."

Also, tell them that the raping was all Dawkins's idea; because it's the only random example of a wrong that he ever comes up with. That will really get his goat.

Finally, if none of this other stuff works, you can always try my patented "plink" method. It gets him every time. Okay, so let's assume you just finished method 4, and now both of you are now cellmates serving a life sentence in jail. Every few minutes, just make a little high-pitched "plink" sound. After a few days, old Richie will start yelling at you. After about a month, he will start plotting to kill you, but he won't be any good at it, because plotting involves concentrated thinking, and it's hard to concentrate when you are constantly hearing "plink" all day.

I can give my guarantee that this method works. I know this because just the other day he tried to kill me by starting a prison riot in the lunchroom. He had me cornered with a spoon to my throat when, ZAP! Taser to the face. Man that security guard was awesome. I just watched him twitching for a while and then said "plink" again. His face was all scrunched up, but I think that was because of the taser and not because he was angry.

Method 6: Call him as Stephen Hawking and cover up all his mirrors.

Every morning Dawkins must ask his magic mirror who is the fairest of them all, if not being separated from his own image for a day will cause his heart to shrivel. Call him sounding like Stephen Hawkings and ask if he wants you to mail him your trash, or just the Queen's, seeing as he wants to be in the knighthood so badly.

Annoying Dawkins is not as easy as it looks. The guy's ego is so big that it requires a lot of creativity. Personally, I think annoying Richard Dawkins should be made into a professional sport. I can think of plenty of people who would be natural at it. Oh wait, I totally forgot one. Call him a "ninny." He totally hates it when you do that.

If all else fails, run up the stairs, the Dalek can't follow you there.