A schematic rendition of celestial bodies in the universe.

The hairy ball theorem of topology states that, whenever one tries to comb a hairy ball flat, one always misses a spot. Topologists, who can never say anything that simply, put it this way: "For every 2‑sphere, if f assigns a vector in R³ to every point p such that f(p) is always tangent at p, then it is a bit surprising that the girl blinded me with Science!"

That topologists use such gassy English is an indication why they are not able to comb a hairy ball, either. They refer to the missing spot as a tuft, a cowlick, or The Latest Rage. The latter is a way of claiming they missed the spot on purpose. Yeah, sure.

Some topologists are embarrassed that so many in the trade are so physically inept, and shave their balls instead. However, they also tend to cut themselves shaving, a fact that explains why the profession is in decline and new topologists have to be converted from other disciplines, after attending months of courses on Topologist Character Development and getting the priest's blessing.

The corollary that "one cannot comb the hair on my balls in a smooth manner" [1] is analogous to the String Theory (regarding stringing my balls together). It completely explains the universe, at least as it relates to hairy balls, by comparing it to a bowl, and hairy balls to celestial bodies. Gravity shakes the balls, causing the stress that sustains all life, at least in graduate school. Without this motion, celestial bodies could be starved of oxygen and become blue balls.

For those without comedic tastes, the so-called experts at Wikipedia have an article very remotely related to Hairy ball theorem.

After the field of topology was pioneered (by, of course, Topo Gigio, after whom it was named), it was Luitzus Egbertus Jan Brouwer who proved in 1912 that "you can't comb the hair on a coconut." Happily, Jan Brouwer moved on after years of trying to comb the hair on a coconut, ultimately becoming the Governor of Arizona who signed SB 1080, the notorious law that let Arizona police check the immigration status of passers-by and, it was feared, whether they were in possession of hairy balls.

The case went to the Supreme Court, where the nine Justices behind their long, black robes allowed the law to take effect, though Justice Clarence "Pubic Hair" Thomas drew the line on "the ball thing."

The 2-sphere (sic) that the Houston Eulers use.

The equation states that every zero of a vector field has an index. The sum of the indexes of all the zeros is 2, because the Euler (pronounced "oiler") number of the 2-sphere is 2.

Likewise, the Houston Eulers, formerly of the National Football League, had a lot of zeros. (This may owe to the fact that they played in R² more than R³; that is, they never fricking "aired out" their 2-sphere.) The Euler number of its 2-sphere was also 2, though it was not spherical. However, every safety the team scored had a value of 2. If the safeties each had a value of 0, one would think the players would have found more valuable things to do.

The equation applies throughout Euclidean space, which would please Euclid (not pronounced "oy-clid") no end. 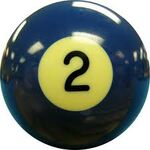 Ordinary people do not encounter 2-spheres at all, outside the sphere of Billiards. Indeed, the British do not even encounter them there, except for the odd Snooker player who numbers his spheres with a Sharpie. This is not permitted in tournament play, nor is it the typical use of a Sharpie when the tournaments are held in Reading, England.

However, one can consider the entire Earth as a large 2-sphere. (Balls!) In this case, the theorem proves that there must be at least one point on Earth's surface where there is absolutely no wind; a meteorological bald spot, as it were. If the reader has enough time, he or she might find this location, though there might be wind there a moment later. However, "It's an ill wind as blows no good."

Around the bald spot, the wind must swirl, as it cannot go into or come out of a point. So the theorem also proves that there must always be one tornado somewhere on Earth. This is only an occupational problem for topologists, and only when they are out looking for the dead spot (that is, during graduate school).

This is what the Earth would look like if the Earth looked like a combed doughnut. In addition, for the nations on the interior surfaces, mutual missile warfare would get a lot easier.

The degenerate case of the theorem would be the Earth when there is no wind blowing anywhere. But again, this has never been observed with a topologist in the vicinity.

Another degenerate case is the torus (doughnut), whose Euler number is 0. (This is an obvious memory aid.) It is possible to completely comb a doughnut, though doing so would scatter its jimmies all over the floor. Unfortunately, Earth is never doughnut-shaped, although it came close in one of the Fantastic Four movies.

Studying whether a torus can be completely combed is as compelling a case for more federal money to send everyone to college than even the lucrative majors of Sociology and Minority Grievance Studies.

Torus may also be a Bull. But the Bulls never play against the Eulers, even though, to a topologist, their respective 2-spheres are identical.

Applying the same reasoning to a system of passenger trains circling the Earth, the hairy ball theorem tells us there must be one place whose train is stopped or stalled. This is usually Chihuahua, Mexico.

A common problem in computer graphics is to generate a vector in R³ orthogonal to some other one. The hairy ball theorem proves (long after the researcher has secured additional funding) that it simply can't be done. Specifically, it says that it cannot be done continuously. Many topologists mistakenly try adapting plasma display panels using scissors or box-cutters. These would be the ones whose wives correct errors in their files by dabbing the same display with Tipp-Ex.