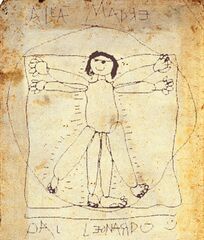 Leonardo da Vinci invented trigonometry in order to discover why other men were so much better endowed.

Trigonometry gets its name from Ancient Greek. Trigo is wheat and nom is the ancient form of Nom nom nom. Trigonometry was originally practiced during breakfast, as Aristotle determined whether there was enough Shredded Wheat left in the box for another huge bowlful without measuring it. Modern mathematics realizes that this is merely half the problem, as one must ensure that the milk runs out at approximately the same time.

The last half of the word, metry, suggests measurement, like the metric system, which is used for measurement almost as often as it is used to devise smaller food packages that sell for the same price. To describe as measurement a branch of mathematics designed to obviate measurement would be perplexing, but these are the same people who tell students they will be able to pay off their student loans in under 20 years.

It was the Sumerians who first divided a circle into 360 parts and found there still wasn't enough to go around. They, and later the Babylonians, both came to the conclusion that similar triangles look a lot like one another, unless one is upside-down. The ancient Nubiles used a similar method as their pert triangles began to grow into circles.

In the 3rd Century BCE (which is the minus-3rd Century CE), Euclid studied the properties of chords. He got only two things wrong: Circles can't hold a note, much less a chord; also, he made his notes in Greek, ensuring that no one would understand a thing he said. 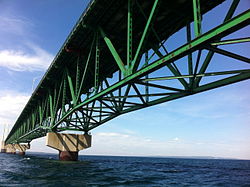 Never go here unless you are sure the engineers used trigonometry and did not just work from a model built with an Erector set.

Wikipedia, where minorities and lefties get to write history according to who wants it the most, credits scholars from India for the invention of trigonometry. It claims that even Medieval Islamic mathematicians figured it out in the 10th Century[citation needed] and were applying it to real-world problems, such as the shortest route for scabbards to cut through necks. However, the swells at that website cannot explain why it fell to white folks to figure out how to build a suspension Troll Bridge over the Straits of Mackinac.

In Europe, trigonometry grew into a major branch of mathematics. Professors used it to prove that the world is round, only about one millennium after every sailor understood that that was the only way the guy in the Crow's Nest could see land before anyone else could. Pitiscus was the first to use the word. Unfortunately, everyone who is the first person to use a word is also someone for whom nobody else can understand what the Hell he is saying. Euler tied up the branch, using imaginary numbers to extend trigonometry to figuring out distances to destinations that do not exist.

Trigonometry has applications in fields from astronomy to carpentry to psychology — anywhere actual measurement is impossible. The average student relates to trigonometry as "Find the Length of This Shadow 101." Its function is to satisfy the "core studies" requirement of liberal arts for mathematics, while avoiding calculus. The reason for its popularity is that a student can get at least a C on the final exam in trigonometry by sneaking a ruler and a protractor into the lecture hall to take some sneak measurements. Sufficiently bad penmanship will convince the proctor that, while it is unclear how you derived your answer, you got pretty close. By comparison, there is no way to get any calculus test question right by accident.

Trigonometry is used in politics, where unmeasurability is the goal. Economic bills, from the Bush "tax rebate" to the Obama "stimulus," compute one thing (the supposed economic boost) by measuring a different thing (the bill's cost, or how well the politician's suit fits him). Bill Clinton was a pioneer in "triangulation," in which he ensured that his heartfelt beliefs were exactly halfway between everyone else's.

Trigonometry is most widely used in warfare. On the battlefield, you simply cannot stroll across the front line with a steel rule to measure the distance to where the mortar round should drop. You must work from your own side and aim the mortar after looking things up in a textbook.

All trigonometric bets are off if the circle has a hole in the middle and/or hair all over it.

“♪♪ It's all uphill from here. ♪♪”

Trigonometry earns its cachet by the fact that all its functions are named after nothing. Tangents and secants are almost something, in that they are names for certain lines drawn in the vicinity of circles. (A tangent is a line that just touches the edge of a circle, as though that happens often.) However, sines and cosines are nothing at all. They are not sinuses, and they are not co-signers, to the particular dismay of most college students with poor credit scores.

For the religious among us who choose to believe lies, the so-called experts at Wikipedia have an article about Trigonometry.

Much of trigonometry proceeds from three simple ratios:

After memorizing the above three formulas, most of the rest of trigonometry class is learning the many ways in which certain formulas are equivalent to certain other formulas. Just so that, if anyone ever hands you one, you can convert it without having to go to the pawn shop.

If the above seems interesting to the reader, it is not interesting to the Ph.D. professor listed on the course syllabus. That is why he has a nerdy grad student teaching the class (represented above by a/h), and minimum-wage work-study students claiming to grade the papers. 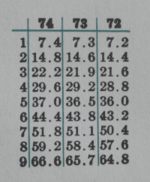 This should dispel the notion that trigonometry would be a boring class.

The back half of the trigonometry textbook was even more fun than that. It was a gigantic table where you could look up any angle from 0° 0' up to 89° 59' and read off the sine, cosine, and tangent.

Best of all were the proportional parts. These were little multiplication tables on the side that let you make a good guess in the case you got something like 59.3'. Putting multiplication tables in a trigonometry textbook is pointless, as anyone who gets into trigonometry has gotten out of multiplication, even if he needed remedial sessions in the summer. But they gave the student the illusion of precision, which counts for a lot — until you take the result, plug it into your slide rule, and read off a very rough guess, even on days when your vision wasn't blurry from last night's kegger.

Before long, miniaturization gave us the pocket calculator, which could take sines, cosines, and tangents; and even multiply and divide them to any desired precision. This rendered trigonometry textbooks obsolete.

But this was just a way point toward attaching a GPS to the object you were studying. As you no longer needed to estimate its height by the angle and the length of its shadow, the rest of trigonometry was now obsolete as well. That meant that university students could move onto important work such as Gender Grievance Studies. 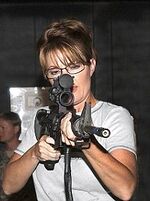 Trigonometry would be the forerunner of AOL, Radio Shack, and the Tea Party movement, which did their job so well as to put themselves out of business entirely.

Another branch of mathematics based on trigonometry is triggle-down economics, so-named for its assertion that, if government gives payoffs to big business, some of the loot will unavoidably "triggle" down to the common man, if only inadvertently. As in trigonometry, policy-makers rely on textbooks and white papers and do not try to measure this effect.

It was to commemorate this branch that Governor Sarah Palin (pictured) named one of her 20 children Trig. This is because medicine was falling under state control and she wanted to insist that the doctor not measure Trig's height but estimate it using protractors and textbooks. The reader would be surprised to find out how she wanted the Doc to listen to Trig's heartbeat. To ensure that the result not be entered into a computer database, Gov. Palin also brought an Uzi to the clinic.