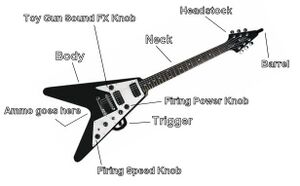 Is this really my rifle?

After many shooting accidents caused by the erratic firing of smoothbore muskets, George Rifle invented the firearm that bears his name.

The distinguishing characteristic of the rifle is its barrel: a piece of steel tube with the outside surface stop-checked in a wavy pattern. When fired, the donut-shaped rifle bullet slides along the tube with the inside of the donut riding on the stop-checking. The pattern causes the donut-bullet to wobble side-to-side so that it is vibrating at a high frequency by the time it leaves the barrel.

This is the secret to the phenomenal accuracy of the rifle: the radio transmission set up by the vibrating metal as it flies through the air acts as a simple radar system, guiding the donut to the nearest cup of coffee...where it dunks itself, with lethal consequences. 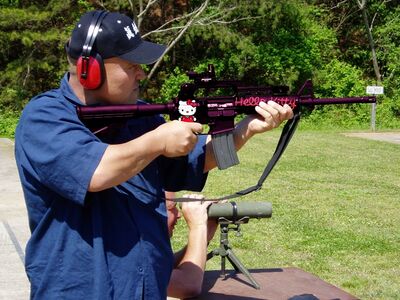 The bolt-action rifle uses a deadbolt to secure itself in a small room while it views pictures of naked artillery pieces in action on the Internets.

The semi-automatic rifle has no stick shift and an infinitely variable transmission, though it lacks positraction and must be kept away from small animals and children.

The assault rifle is used to generate electricity, though a separate charge of battery is required as well.

The muzzleloader rifle tends toward heavier calibers, as it habitually sits around loading its muzzle with whatever food is in the fridge.

The machine gun plays a series of 32nd notes very fast around the 12th fret. Yngwie Malmsteen is a machine gun.

The inflatable rifle is made of vinyl and comes with a small battery-powered pump. It is capable of firing either donuts or bagels.

This branch of the US military should not be confused with the US Marines, who are dead butch and not at all funny.

This is my rifle.

There are many like it but this one is mine. I can tell because I got my pinkie finger caught in the action and half of it is still there.

The fleshy part of my pinky has been in there for three months now. It smells bad.

My rifle is my best friend. It is my wife. We were going to have a family of little BB guns but...I am incontinent. I mean illegitimate. Illiterative. Whatever!

Without me, my rifle would be sleeping with some other guy. Probably several guys...

Without my rifle, I am a sad shell of a man, lurking in alleys and shooting up No-Doze and stool softener.

I must fire my rifle once before I die. But I am afraid. What if it bites my other pinky off?

I must shoot straighter than my master sergeant, who is trying to kill me because I am afraid to shoot.

I must shoot him before he shoots me. Maybe I will just hit him in the knees with my rifle.

Before God I swear this creed: my rifle and myself are kind of lame, we are not very effective, but still we are the key to keeping the latrine tidy and the enema bags off the floor.