The Kidney Stone Gun is a projectile firing weapon from around the early 1700's. The idea of the weapon came from an old wives tale circa 1300, and was featured in Leonardo Da vinci's notebooks, but still took some time to come to fruition. Today, the weapon is used as a last choice by the United States military and Al Qaeda.

The Kidney Stone Gun in the Medieval Times[edit]

One fateful day, Nathanial von Baron went on an exquisite morning hunting trip. Unfortunately, this trip also included an unexpected Grue attack, resulting in the near immediate death, by means of being completely and totally eaten, of all of Nathanial's three hunting buddies. Nathanial only survived by fleeing into the woods, with only the shirt on his back and the nephrostomy tube in his hand.

After many days lost in the wood, surviving on nothing but pine cones and deer urine, Nathanial found to his horror that the Grue had tracked him down and spotted him, disproving folklore that running from a Grue would indeed guarantee escape. Trapped at the edge of a cliff, Nathanial did what any logical man would do when trapped in the corner by a Grue; he tried to crap his pants. However this effort was fruitless, as an unfortunate bout with diarrhea had left him empty. So instead the pressure ran straight to his kidney, blasting a kidney stone out of his nephrostomy tube. This hit the Grue and, to Nathanial's surprise, only served to make it angrier. Nathanial was eaten and so the tale ends, teaching little children that it is indeed fruitless to attempt to fight off a Grue with only a kidney stone and a nephrostomy tube.

Taking a simple musket and replacing the loading chamber with a new, more fitting form for one's penis, his new invention hit the market. By loading gunpowder into the chamber and inserting a kidney stone in the newly replaced loading chamber, one could fire a kidney stone many yards. The gun's popularity did not spike until 1754, when a rather normal bar-brawl set off the Great Irish War of 1754, lasting a resounding 5 minutes and leaving few casualties. The Irish government found this amazing, and hired Samuel to make more of the weapons. He became a gajillionare, and used over half of the money to hire cheap prostitutes (and a really huge blender, for still mysterious reasons). 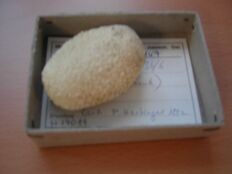 An example of the typical kidney stone gun ammunition.

The Kidney Stone Gun in the Modern World[edit]

Later spin offs included the Kidney Stone SMG, and the much less popular Kidney Stone Sniper. The Kidney Stone Sniper made an appearance in an early beta of Counter-strike, resulting in much debate and the removal of the weapon all together, as a headshot would only result in a meager five damage and a very pissed off enemy, particularly if the player was a grue. Currently, the Kidney Stone Gun made by Beretta features an invasive loading tube and a four-round magazine. It also comes with 40 CCs of Morphine for the excruciating pain of loading another magazine. In 2004, this weapon was voted "least likely to protect oneself against a Grue with" by Nuclear Power, Inc. An average Kidney Stone Gun costs about -$5.50. That's right, gun stores will actually pay you to take the gun away from them.

While most consider the Kidney Stone Gun completely harmless, many groups, such as the U.P.O.N.U.S (United Peoples Order for Negating the Use of kidney stone guns for the protection of Squirrels) are attempting to end the production of the weapon, as it has strange mutagenious effects on the likes of squirrels and other small furry creatures. However, it has never been successful in any court case, as all the organization can use in it's offense is a stick, a kidney stone and a rather strange looking squirrel with 14 testicles named Eddie. The greatest threat to the weapon's production came along with the case of U.P.O.N.U.S vs. Beretta in 1972, which ended upon the news of the death of Eddie, the beloved 14 testicled squirrel, which upon autopsy revealed that he had overdosed on kittens. A funeral service was held shortly thereafter, and another case has never been filed.