Paradox (Achilles and the Tortoise) 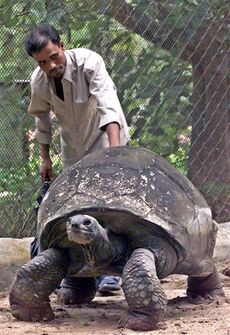 No, this isn't Zeno of Elea. And it's not Achilles. It's Mr. Tortoise. Mr. Tortoise always wins.

Zeno of Elea, (circa 490 BC – present), a pre-Socratic Greek philosopher, was the master of paradoxes. Zeno's most famous paradox about Achilles and the tortoise can be stated thusly:

Stated for Dummies, this Parodox means that Achilles (the fleet-footed Greek war hero of Achilles Heel fame) can never catch up with the slow-poke tortoise if aforesaid tortoise believes in providence. Whenever Achilles reaches a point that is somewhere the tortoise has already been, the tortoise will have by then advanced 'mysteriously but surely' past that point, so that Archilles will still have farther to go, even if it is an infinitely small one.

We have all seen this paradox work in practice. Take a slow-moving child; whenever his mother turns away from it, it starts running, and then nobody can get it anymore. Or take a slow-moving heavy truck that's ahead of you on a very narrow road; you will never be able to pass it, even if you are on a motorcycle.

The mathematicians, who purport to prove this paradox as false, obviously haven't seen or been a child nor driven a car.

The United States military has incorporated Zeno's paradox into its defensive strategy. There is a now a system of radar stations equipped with ESRs (Extremely Slow Rockets) permanently on standby across the United States of America, designed to detect any missile strike against the country, and then immediately fire an ESR at the same target, ideally just in front of the offensive missile. As we know from the study of Zeno, the faster missile can never overtake the slower rocket no matter what speed it reaches, and since the Earth is also moving through space even slower than the ESR, neither munition will ever reach its target.

Democrats believe that Communists will never overtake them. This, in turn, produces another paradox, as the situation suggests that a candidate can lead in a race, even when he is not more religious or powerful than other competitors.