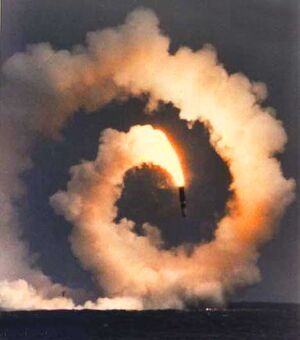 The Tomahawk cruise missile, used exclusively by the the Mohican Native Americans during the battle for their homeland against the evil "white man".

Missiles can be launched from aircraft, seacraft, bazooka-like launching rails/pipes, silos and other kinds of nifty stuff. Missiles were designed to blow things up that could not be blown up with a BB gun nor a firecracker. There are many different counter-missile devices, which often involve the usage of missiles themselves, resulting is hilarious firefights between bombing squadrons that fire anti-shipping missiles and ships that try to counter both the missiles and the bombers. These situations are quite rare nowadays, but were frequent during World War One and A Half. The casualties of said attacks totaled 1 during the whole war. The only casualty was a cook whose ship took a hit, tilted and he got burnt by hot soup, sustaining minor burns. During Operation Desert Storm, missiles were frequently used to destroy everything. Cruise missiles attacked buildings, aircraft shot down other aircraft with missiles, aircraft attacked tanks with missiles, the Iraqis fired SCUD missiles and anti-ship missiles at ships (which were intercepted by anti-missile missiles). Even individual soldiers used hand-held missile pipe devices to fire them.

Fired in times of warfare and political strife, such as during the elections of United States Presidents, Academy Awards ceremonies, and U2 concerts, a missile always destroys some sort of non-military target (such as a charity hospital, seminary school, or Chinese embassy) with deadly accuracy. These targets are later deemed "collateral damage" (from the Latin "collaterus", meaning "whoops" and the Greek "damageus" meanin "women and children") by the military commanders who utilized them.

A missile payload can be just about anything from the good old fashioned explosive variety to the latest in "aid missiles" which contain vital humanitarian supplies such as powdered milk, porridge and napalm. Missiles with chemical, biological and nuclear warheads are termed WMDs if in the possession of "rogue states", otherwise the term is "strategic deterrent".

The missile guidance computer scenario works as follows: because a variation has modified some of the information the missile has obtained, it is not sure just where it is. However, it is sure where it isn't, within reason, and it knows where it was. It now subtracts where it should be from where it wasn't, or vice-versa, and by differentiating this from the algebraic sum of where it shouldn't be, and where it was, it is able to obtain the deviation and its variation, which is called error.

AMRAAM The Advanced Motherfucken Radical Air to Air Missile better known as the AIM-120, is the modern air to air missile that replaces the semi-stupid AIM-7 sparrow missile. Its primary advantage is the "forget to fire" ability, that fires the missile automatically at any suspected target so the pilot can forget about that and focus on more important things, like playing Gayboy games.

ARCHER AA-11 / R-73 this is a commonly used Soviet heat-seeking missile. It is famous for being cued to the pilots head movements. It will sniff out any enemies the pilot looks at. This really gives one the "don't fuck with me" look.

ATOLL AA-2 / R-3 is a Russian copy of the Sidewinder missile. It was replaced by the more sophisticated AA-8 Aphid Pussy Missile.

TOMAHAWK™: A type of cruise missile that was used by the last of the Mohican indians to thwart the encroachment of the British "white man" into their territory in 1757. The British militias were stunned to see the supposedly primitive tribesman wielding such awesome technological power. It would have won them the war had the missile been more accurate and carried an explosive ordinance package rather than breaking open and scattering the battlefield with tiny stone hatchets. They know where they are at all times. They know this because they know where they aren't. By subtracting where they aren't from where they are or where Bob is from where Cheese isn't it gets a difference, or DeviantART. If in case it knows where it wasn't is it now is where... You know what? Let Oscar figure it out. Oscar?

A missile in use. Missile on the left, launched from the small naval thingamajob.

SILKWORM: A joint effort between the Chinese and General Motors, produced this short-range cruise missile. It has a range of 50 miles, and can carry 852 pounds of high explosive sticky goo produced from the larva of moths.

SCUD: A short-range tactical missile produced by the former Soviet Union, China, and North Dakota during the Cold War. The name comes from Soviets, Chinese and uhh... Dakotans? It has a range of 390 miles, and could carry a 770 pounds of explosives, or a 10 kiloton nuclear warhead. Used SCUD's can be found selling like hotcakes on eBay, and have been a popular seller among criminal masterminds and those "fly-by-night" terrorist groups on a budget. Raytheon built the guidance set for the SCUD. SCUDs are very popular because of their cheap price and unlimited distribution. They are legal weapons in 45 states. Ironically, North Dakota is not one of them.

POLARIS A3: A submarine launched IRBM missile produced by the United States, and sold through an exclusive contract with Lockheed, Sears and Wal-Mart. The Polaris has a 2800 mile range, and can carry 200 kiloton nuclear warhead. Hey, they weren't fuckin around when they made these babies! Expensive nuclear weapons, sub required for use.

PATRIOT MIM-104: The all weather, all altitude, air defense missile - that comes in handy 6 rocket packs (please dispose of the plastic packaging responsibly) - that can be mounted to the back of any sized SUV or light pickup truck. A single patriot missile creates an incredible explosion that produces 10 new pissed-off fanatical terrorists in one hit. Especially when you use them to shoot down the SCUD missile they just fired at you. Raytheon invent the Patriot Missile System (PMS).

The Patriot comes in launchers containing several projectiles because of their poor accuracy, as with other missiles.

National Missile Defense: On the face of it, not just a missile but a comprehensive weapons system designed to intercept warheads sent by "Rogue States" and rich terrorists via air, instead of by sea. Critics who note that the system doesn't actually work fail to realize that the NMD is actually just a cover for Fiscal Irresponsibility, the most effective weapon the world has ever known.

No-Dong Missile: This is the favored missile of North Korea's dear leader, Kim Jong Il. Teenage female members of Kim's "Joy Birgades" report that the name of this missile has symbolic meaning.

It should be noted that the missile is indeed capable of housing a nuclear warhead, but this doesn't mean it would actually detonate.

Sidewinder air-to-air missile: The most common anti-aircraft missile, favored for its cheap price, which, in turn, is achieved through its extremely simple drive mechanism, after which the missile was named: on the right "Side" of the missile is a "Winding system", into which one thrusts a winding key and rotates it to load a spring mechanism (larger than that of an antique clock and lacking the need to rotate the hour and minute hands, but otherwise identical), which will drive a pusher propeller located in the back of the missile. Because of problems fitting a spring of reasonable size into the small weapon, the propeller accelerates the missile into a high speed during the first one and a half seconds of the flight, after which the missile flies on dumb luck. This contributes to the extremely short effective range (30 metres max) of the Sidewinder.

Basically, one "winds" the missile's "side". This person was the original "Sidewinder" until the missile adopted the name. These days the guy who winds the missile is called "the poor sucker", as he was before the Sidewinder name.

The most effective missile is commonly known as the Nuclear missile. Due to the missiles incredible accuracy they decided that instead of making one that has a better guidance system, they would make one that blows every fucking thing within the possible miss area, usually around 50,000 kilometers in diameter. Despite this improvement, they somehow manage to miss. The most famous of which was Hiroshima, where a nuclear missile headed for Nazi Germany got lost and didn't want to ask for directions.