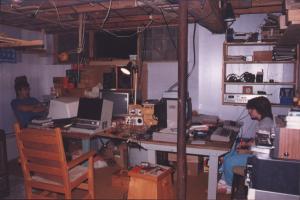 Basement-dwellers are people who spend most or all of typical days in the basement of their home. The term does not refer to workmen such as meter readers, but to the dependents of the homeowner.

There are many reasons a person might elect to dwell in the basement, such as the desire to avoid sunlight or attraction to the smell of mildew. However, real-world basement-dwellers overwhelmingly make this life choice out of the desire to avoid face-to-face contact with other people. Even Mom avoids the cellar, except to bring down pizza and take the trash upstairs.

Basement-dwelling is a modern trend enabled by recent advances in electronics and computing, but akin to trends of previous generations.

Dad was a hippie. It was an individualistic time, except for the extreme attention to the right and wrong ways to be a hippie. You had to dress the right way, not do anything to your hair, or your face, or your body hair, or your smell. And you had to learn the right slogans. Do your thing, man. Turn on, tune in, drop out! But after the second drug bust, the draft and two years in the Army, and the fact that your parents seem to have left town without leaving a forwarding address, you got a real job, where you met Mom, got married, and had a couple of kids.

For those without comedic tastes, the so-called experts at Wikipedia have an article about Basement-dwellers.

And--whether or not the kids are turning on--damned if they aren't doing their own thing. And they have completely dropped out. You should be envious that they are doing what you just talked about. Don't say this isn't what you meant.

Some basement-dwellers have mothers who obsessively cook for them. The mother may bring meals down on a TV tray. A typical response to this doting is to continually search for trap doors and other methods of moving even further underground.

Other basement-dwellers have mothers who work outside the home, or mothers who have responded to all the weirdness by trying to avoid the basement entirely. These basement-dwellers get sustenance by phoning for food to be delivered. They may have a mini-bar refrigerator, or even the household's old refrigerator or freezer, down in the basement. But they never cook. (That's gay.) And nothing is in the freezer except Popsicles and maybe frozen orange juice, which they are willing to thaw and mix up. Dishes they wash shortly after finding that there are no clean dishes left anywhere in the basement. It is a chore but it beats going upstairs and having Dad ask you corny stuff like how your day went and when you are getting a job.

The basement-dweller does all his socializing by Internet connection. His friends have handles rather than names. He doesn't know what any of them looks like, although some of them have a character on Second Life and he knows what that looks like. He doesn't know if anyone is telling him the truth. Nor vice versa.

When sufficiently strange things happen (such as two consecutive misunderstood emoticons) that the basement-dweller's paranoia takes over, he will simply never log back in to a given web site, but will start over (with exactly the same behavioral problems) somewhere else. Sometimes he will start over at the same place but simply select a different handle. By the way, when a jerk up-and-disappears, and the next day a different jerk arrives with the same misbehavior and the same misspellings, no one is the wiser. Ever.

On the one hand, let's consider sex. Most basement-dwellers are avid fans of 4chan, a marvelous site where you can meet members of the opposite sex, exchange one-line conversations with them, and occasionally encounter a girl who will invite you to ask her anything. And, while you wait for her next response, you can peruse the world's finest collection of hand-me-down, five-second, thumbnail animation loops showing things being put in holes they don't belong, and Photoshopped images of things people claim is happening up on street level. So much for sex, on the one hand.

Regarding romance, it never happens, as serious commitment (either to a person, to a manufactured identity, or even to a web site) never happens. (See the preceding section.)

Although it's possible to pursue careers, such as web site design and even writing articles for parody encyclopedias, from the confines of a cellar, most basement-dwellers subsist on a periodic allowance from their parents. This may be paid in cash, or paid in kind, as when a parent pays and tips the delivery boy from the House of Pizza when he arrives with the day's meals.

Generally, the parents regard this as a great bargain. They need to maintain a downstairs telephone and an Internet connection that they never use and don't understand, but there are no bills to enroll Junior in Little League or send him to summer camp. Clothing needs can be satisfied by a single annual trip to K-Mart or even the Goodwill store, as the basement-dweller doesn't need fashionable clothing and the fit can be approximate. This is fortunate, as the parents generally don't really know what size the kids are any more. And the parents never have to think about equipping the basement-dweller with an insured automobile.

Basement-dwellers are able to follow social trends and government events in the outside world. They may even participate in democracy, courtesy of the Absentee Ballot. But most basement-dwellers have simplistic concepts of government. They believe all politicians are liars (except Ron Paul) and are in the thrall of large corporations.

However, whether by blogging, chatting, more intricate interaction, or Letters to the Editor to a newspaper in a different state, most basement-dwellers who participate in wider society take advantage of their anonymity (and disposability of their Web identity) to interact by name-calling. People they don't understand are NOOBs. People they do understand are FAGGOTs, FUCKTARDs, and NIGGERs (independent of skin color, which is never known on the Web anyway). People who build things of value are to be vandalized and conspired against.