From Uncyclopedia, the content-free encyclopedia
(Redirected from Fat People)
Jump to navigation Jump to search 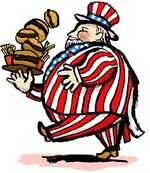 A frequenter of FPA meetings unknowingly about to explode.

Fat Persons Anonymous (or FPA) is a For-Profit Association created in 1776 by the Quaker Oats guy (William Penn), though he was anything but Anonymous. It was at that time that fat people first started cropping up and becoming a nuisance, although they only recently gained national attention with their campaign to gain free Big Macs, voting rights, and general equality with the rest of the world — despite their need to displace the rest of the world just to walk down a sidewalk.

The organization has long been the whipping boy of history, beginning with being blamed for the American Revolution, the Civil War, Microsoft, and more recently, the 2000 election results.

During the 1800's FPA enjoyed semi-succesfulness, being only a few hundred thousand in the red every year. But then on January 1, 1900, the generally accepted day of all hell breaking loose, all hell broke loose. A new copy-cat organization for drunkies with a very similar name, called Alcoholics Anonymous, popped up on the radar, and a massive war began. This war, sometimes called World War II, killed millions of drunkies, caused millions of drunkies to kill themselves, and also caused the heart attacks of 7 really really fat people, including Dick Cheney and Oprah. This war, which raged on for 42 years, was abruptly stopped by an organization no body had ever heard of, called Sweden, who sent 3 soldiers powered with high powered giberish amplifying devices which promptly caused all enemy combatant's heads to explode.

Their slogan is "FPA, sitting on our asses and complaining since around 1776."

Get a load also of[edit]