This lizard is similar to Americans in many ways: it's cold-blooded, requiring vast amounts of energy to move about; it voted for Reagan in 1980; and, as you can clearly see, it's very patriotic.

Americans are a genus of human (scientific name Americanus) found predominantly in the United States of America. Americans are primarily detritovores, but they are not above eating their own young. Average body size ranges from anorexic to obese, depending on the species. Populations are densest in the areas described by scientists as "cultural black holes", such as Los Angeles, Las Vegas, and Miami.

Scientists are at a loss as to describe the ecological niche of Americans (currently, they are classified as parasites). Indeed, one biologist described Americans as "the tumors of the animal world."

All Americans are considered nonnative invasive species. For details on eradication efforts, see Detection and Eradication.

Evolution of the American 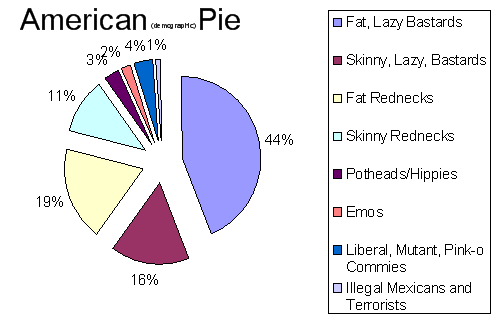 The genus Americanus did not always comprise the dominant species on the North American continent. Originally, North America was populated by the now almost extinct members of the Indigenous genus (also called "Native Americans", "American Indians", "Indigenous Americans", not that it matters what you call them because they'll get offended anyways). The current species of Americans evolved from a small population of Europus emigratus that was accidentally transplanted en route during a routine quixotic search for gold. Using genetic analysis, scientists have been able to deduce the full bloodcurdling story.

At first, the transient E. emigratus fared poorly, and relied on cooperation with the natives in order to survive. During this time, it would seem that the natives did not view the newcomers as a threat, even holding Tupperware parties with them (indeed, the following years saw a booming market in plastics). This time of peace did not last long, however, as the Europeans asserted the most formidable adaptions evolution had armed them with: ballroom dancing and portrait painting. Through savvy use of these potent weapons, they easily crushed the natives' own adaptions of rain dances and abstract art, and forever cemented their reputation as an invasive species. Sadly, over the next 200 years, as E. emigratus split off to form the Americanus genus, the usurpers would lose these invaluable abilities (they have since been replaced with square dancing and grafitti).

There are numerous species of American. For the sake of brevity, only the most common types will be described. 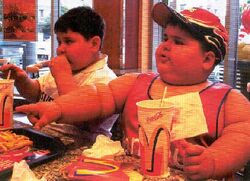 A young obese American in its natural habitat.

The most common type of American, A. fatassus, mostly inhabits cities like Houston and Chicago. It is often seen gathered around fast-food joints, and is easily recognizable because it is the most massive of all the species.

A. fatassus is a parasitic omnivore, and it uses its lobes of fat to suck the ambient life force out of the surrounding environment. The obese American will also eat anything, be it shit-grade beef or compressed garbage, so long as it is sandwiched in a burger bun or taco shell. It eats in large volumes, and stores the fat in sacs that give it its obese appearance. It saves the stored energy in case it has to do something strenuous, like walking ten feet. Its two-ton body is, in many cases, too heavy to move without aid, and so it relies on SUVs to cart itself around (much like Jabba the Hutt on his sail barge).

Males and females are indistinguishable, because rolls of fat block the genitals from view. Further confusing gender identification are the man-boobs seen on chest of the male. One should avoid mating with them, or watching them mate, at all costs.

Warning: Obese Americans, like plastic bags, must not be left near children unsupervised. Children may be stepped on, sat on, or become hopelessly entangled in their rolls of fat. Infants especially must be kept away, as direct contact with the obese's fat lobes will instantly snuff the life force out of them.

Ruby-throated Americans displaying their formal wear. The hoods are not to be confused with dunce caps, despite their geometric similarities.

A. ignotus makes its home primarily south of the Mason-Dixon line. It is commonly called the "red-neck", however, this term has fallen out of use with scientists, who now prefer the gentler-sounding "ruby-throated". A. ignotus typically has a porky build, and it is the second largest species of American, often mistaken for the obese American by inexperienced American-watchers. Its preferred foods include squirrel, rattlesnake, vittles (whatever the hell those are), and fried chicken. In times of scarcity, they have been known to eat children, though as a testament to their family values, they never eat their own children, only others'.

Such Americans are of little threat without additional armaments, as their teeth are generally missing due to drunken Nascar-induced fistfights, and their drug-induced crazes usually preclude any consistent muscle movement. Travelers through the habitat of the ruby-throated American should take caution, however, as this type of American is known to favor shotguns, cans of cheap beer, and large dogs (as well as other instruments traditional to the mating practices of the ruby-throated American) to defend its territory. Ruby-throats have developed a primitive language, though scientists have yet to decode its meaning.

The ruby-throated American mainly inhabits trailer parks, although it may also be observed in the ugly part of any suburban neighborhood. The species can be identified by its prominent display of the Confederate flag. These flags serve to warn predators that the ruby-throated American's flesh is poisonous. Anyone who eats one will suffer from excruciating indigestion, acid-reflux, and cancer. This variety of American seldom thinks independently, and tends to accept everything its leaders say as fact without question.

Warning: The ruby-throated American is simultaneously the most dangerous and the most ignorant kind of American. It is a danger to itself and others, but mostly to gays, Jews, blacks, liberals, and you. 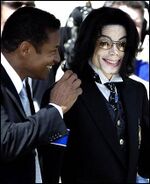 A. africanus, or the black American, inhabits large portions of America, although it does not exist in Alaska, Montana, Nebraska, North Dakota, or Maine. The black American is an omnivore and eats rap music and "bitches," a type of vegetable. The species can be identified by their display of the race card, which warns would-be predators that they are an Oppressed Minority and attacking them will result in a public condemnation from Al Sharpton. This defensive mechanism is highly effective, and studies show that Al Sharpton successfully prevents 95% of all racism. 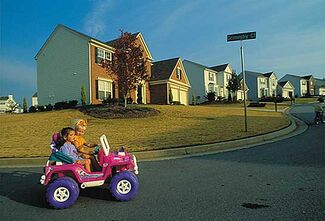 The common middle-class American in its juvenile stage. The horror... the horror!

Another prevalent species, A. mediocres (common name "middle-class American" or just "middle American"), mainly inhabits the suburbs, although it can be spotted migrating to warmer parts of the planet (or just to see relatives) during the weekends and holidays. A. mediocres, like its cousin A. fatassus, does eat fast food, but it primarily eats loans, mortgages, and useless consumer products. Unlike the richer variations of American, the middle-class American does not store money for the economic wintertime, preferring to eat its money now rather than later. As a result of such poor financial management, middle Americans are the first to start whining whenever the economic wintertime begins or interest rates go up.

The middle-class American is also the most docile American, and is easily herded in any particular direction. It is this habit of the middle-class that causes some to believe that A. mediocres evolved from lemmings, a theory supported by cases of politicians driving it en masse over cliffs. However, this theory was disproven when genetic tests tied them to a type of cow. Even aside from the genetic evidence, it is debatable whether the middle American "evolved" from lemmings, as it is clearly a de-evolution and is actually dumber than a lemming. (Ever tried to herd a lemming? You can't.)

An alleged sighting of the mythical black middle-class American. The image is believed to have been a hoax.

If the black middle-class American did exist, it would revolutionize the way blacks are thought of by scientists. Unfortunately, since no one has proven that they exist, scientists therefore conclude that all blacks live in ghettos and enjoy rap music.

A. patrician is omnivorous and it eats whatever it wants to, but it prefers the flesh and blood of poor people, undocumented immigrants, and the middle class. The rich American is also very territorial, and regularly claims and invades foreign territories (see Iraq and Manifest Destiny). Individual rich Americans also maintain fairly large personal territories, in the form of vacation mansions and the Bahamas. 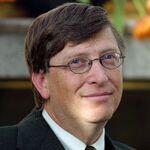 While quite harmless looking, this species is quite deadly and predatorty in nature.

A. celebritus' primary habitat is Los Angeles, and occasionally Miami. The celebrity is a dietovore, its main food being TrimSpa, the South Beach diet, and the Atkins diet. It is a compulsively fashionable creature and only pimps the latest charities and humanitarian aid efforts.

The celebrity bears similarities to both the rich American (A. patrician) and the British nobility (Britannia patrician)—in fact, if you sucked the latter's brains out and gave them breast augmentation surgery, they would be identical to celebrities. A. celebritus is generally considered the dumbest species (see Paris Hilton for examples) and also the most beautiful species (if by "beautiful" you mean anorexic).

Pictures of celebrities are very rare—no one ever seems to have a camera when they're around.

Immigratus unofficius, or the undocumented immigrant, is a transition species, in the process of evolving from Mesoamericanus emigratus into a true member of the Americanus genus. The undocumented immigrant primarily subsists off of whatever tidbits rich Americans throw at it. It lives wherever there are jobs other Americans are too lazy or incompetent to do themselves.

Though scientists are excited at the prospect of a living "transition species", they caution that it will take several million more years before I. unofficius evolves into a full American.

Americans are considered to be dangerous invasive species. They have been known to wipe out whole ecosystems of native flora and fauna. Unfortunately, once established, they are notoriously hard to get rid of. The following are a few handy suggestions towards eliminating an American invasion. 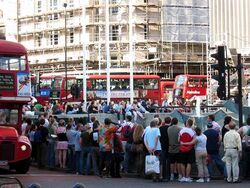 Can you spot the invading Americans?

Ask yourself this: Have I seen any Americans lately? Even the presence of two or three Americans can lead to a whole flock of them coming and establishing themselves. (One American alone is not enough to cause worry. Two are necessary to reproduce. Or handle artillery.) Detection is fairly easy, because Americans in foreign countries always look like tourists.

If you have detected an infestation of Americans in your homeland, get an industrial strength American repellant. (Look for labels like "contains highbrow elements" or "contains substances the state of California may possibly acknowledge as being vaguely carcinogenic." Either of these ingredients will send Americans fleeing in terror.)

Once Starbucks coffee shops appear, however, the American infestation is permanent. At this point, the most humane alternative is through capture and forced relocation. Capturing invading American hordes is fairly easy: simply place tourist traps in various locations, effectively detaining them in a controlled area. (For best results, bait such traps with trinkets, such as t-shirts, paperweights, and the occasional item of cultural value. All of them way overpriced, of course.) Eventually, they will relocate themselves (back into the U.S.) once they run out of money.