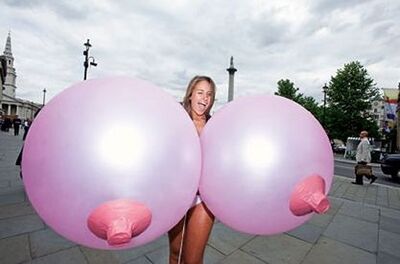 For those without comedic tastes, the so-called experts at Wikipedia think they have an article about Breast implants.

“They make my breasts look faker!”

Breast Implants are silicone-based squeeze-toys that can be inserted into a woman's chest to make their boobs bigger. It also aids in amusement of men (or Monkeys) by giving them a purpose to actually squeeze a tit for more than 5 minutes before getting bored, because it makes a squeaky air sound and is fun to play with.

The implants came from Dr Albert Einstein's gynecologist. "Dr. Gyno" came up with the concept of breast-enlargements when he threw a rubber ball across the room for his dog to catch, and the ball landed down his wife's top and into her cleavage. Upon retrieving the ball, Dr. Gyno grabbed the ball and squeezed it enough for the toy to make a squeaky noise. Once the ball was removed from her clothing, he realized the ball inside her shirt made her look better, with bigger tits... Within 5 minutes of this realization, Dr. Gyno had already drawn up a 328 page schematic diagram of how these squeak-toys could be surgically inserted into the females breasts. Trust a man to come up with something that damn quickly when it involves bigger mammaries.

Where Implants Come From

Implants grow on Inplantonioussillykuntmustard trees, and were first harvested by Dr. Gyno in 1964, from a plantation he discovered during one of his many forays to his favorite thinking spot in the world at the time - the valley now known as Silicon Valley. At the time, he referred to it as "E=MC Hammer" in reference to the future. By frolicking amongst the many trees, vines and stalks of implants, his scientific mind was able to deduce that these squishy yet ample substances could be implanted in various parts of the body. However, due to the downfall in 2010 of economical economy prices, and Steve Guttenbeg announcing he was going to make an 8th Police Academy movie, Silicon Valley was closed down. Now, all Silicon implants are made in Taiwan by Mattel. 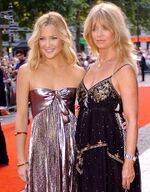 Perfect examples of when breast enlargements should be considered

The elation received from having larger breasts made Linda Lovelace, of Deep Throat fame, advertise Diet-Coke products in 1986. During a spot of exhibitionism on set, Linda swallowed a Mentos that set off a chemical reaction because the Mentos formed an acid after reacting with the Coke, causing such a combustion inside the implants that they imploded.

Breast Implant Manufacturers suddenly came under fire when news got out that any woman with implants ran a risk of having their titties implode if they ate a Mentos. These Boobie-Traps were reported all over the world, and the dumb people who heard about the chemical reaction with the Coke that was used inside the silicon implants just had to try it out. There was another discovery just 2 weeks later.

Women who had the implants and ran, jogged, or shook their titties too much resulted in the carbon gasses of the soda filled implants expanding, just like shaking up a can of unopened soda, and before you know it, the booby boom catastrophe erupted. Breast implants were then asked to be taken out, packed neatly in a box or container, and shipped back to Silicon Valley for mechanical repairs. 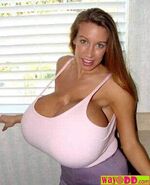 For two years, breast implants were banned by The Justice League, which was run under Superman and Batman. They felt incapable of battling crime, and Wonder Woman was jealous that she was out-jubblied by many a woman with ill-gotten breasts. Breasts were allowed in moderation from 1988 onwards, but were not popular until Pamela Anderson Lee starting giving men boners on the reality TV show Baywatch "Boobwatch" in 1990. From then on, Canadians and other fellow immigrants (only the Icelandic folk) cultivated these great crops yet again for the benefit of all whores, insecure women, and Marilyn Manson.

Back and Bigger than Ever

To avoid the exploding boobie-trap problem, the implants are now filled with Dr. Pepper. Dr Pepper does not have the same reaction when it comes in contact with Mentos candies. Breast implants have been safer than ever since 1990, and will continue to be that way in the future. Recently they have developed many various sizes, depending on if you use regular Dr. Pepper, Diet Dr. Pepper, Caffeine Free, Cherry, etc... which is remarkable, since they didn't exist yesterday.

Real boobs look like part of a woman's body, whereas fake boobs look like a pair of plasticine hemispheres comically stuck onto someone's chest. If the breasts look round-ish, supple, and firm, and have a speed-bump look to them, they are real. If there is a one or more inch gap between the two breast centers, and the cleavage looks more like a roller coaster dip then the Grand Canyon, they are fake. Also, fake boobs will have more of a bowling ball or basketball shape.

Should you squeeze a boob and no sound is heard... expect a lawsuit.