From Uncyclopedia, the content-free encyclopedia
Jump to navigation Jump to search
You have new erections.

For those without comedic tastes, the so-called experts at Wikipedia have an article about Pamela Anderson.

“I did not have sexual relations with that woman.”

“I want to have sexytime with Pam-Ella and make romance explosion all over her stomach.”

“I'd rather put my dick in a blender!”

~ Anyone with 20:20 vision on Pamela Anderson

Pamela Anderson (born July 1, 1967) is a walking pair of boobs, best remembered nowadays for her work on the Emmy and Nobel winning Pneumatic Theory of Exposure for last night, & for her vile plastic melons. She developed this theory during her athletic career. She also invented what we call the titty fuck, and served bravely as Canada's Governor General during the Arctic Mammary Crisis of 2001. Note-- Anderson's lineage has been traced back to Chinese prostitutes who inhabited the Talla-wha-kuh region of northeastern Tunisia. She still lives there with three seals and a Ukranian midget named Jamal. Recently, she spent 0.01% of her financial assets ($300,000,000,000,000,000, if you're interested) on extra breast implants, thus making her boobs slightly larger than an average house.

Them Titties Anderson was born in Ladysmith, British Columbia, near Victoria, British Columbia and Nanaimo, British Columbia, Canada, of partially Finnish ancestry (her paternal grandfather, Hermanni Hyytiäinen, from Saarijärvi, left Finland in 1908). Incorrectly believed to be the first baby born on Canada's Centennial Day (she was born at 4:08 in the morning), the newborn Anderson won fame as the nation's "Centennial Baby". However, the Campbell River Upper Islander of July 5, 1967, reported a baby born two hours earlier on the same Canada Day ([1]). [2] After her birth, her parents, Barry and Carol Anderson, moved to the town of Comox with Pamela, who was still a baby. She is also well known because of having sex with Homer Simpson.

Pamela originally started her career as a middle linebacker for the Alberta Bamnwackers. Talented and versatile, she eventually landed a spot on Baywatch because she gave some dude a hummer. Upon arriving in hot California from frigid Canada, she quickly disposed of her sweater, thus attracting a lot of attention from California men. As their idea of the pursuit of happiness didn't correspond with hers, she had to run to like hell and was discovered by an athletics coach, who suggested surgery

Pamela has won numerous gold and other precious metals in long distance running and in pneumatic beach volleyball at the Olympic Games in Los Angeles in 1980, Reykjavik in 1984 and Paris in 2012. Being a long distance runner, she used her pneumatics to gain extra momentum and lift to achieve victories which have helped to breast the winners tape.

Evolution of Her Breasts

Pamela's boobs became bigger as she got older, just like anyone else. The only difference is that Pamela hit puberty around age 23. This hints at the fact that her boobs developed to a much greater degree than your standard cunt. However, since she shows one and not the other (except on tape) we will never know and can only guess or ask Tommy Hilfiger. There is another rumor that she was splashed with radioactive goo when swimming nude; the reason for this rumor is the fact that her boobs each have their own center of gravity, each approximately the size of a small moon. This rumor may not be true because she doesn't glow green but she sure is fertilized.

In recent years, Pamela Anderson has retired her boobs from service, and they both plan on leading rich, fulfilling lives as senior titizens. Her left jug plans to move to Florida and enjoy calm cool summers in the Everglades, being chased by alligators and such. Her right gazonga plans to travel to France, and enjoy a variety of delectable wines and pastries. Lately, she spent trillions of dollars on new implants, making her boobs the size of buildings. 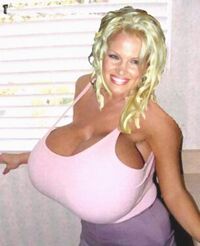 Pamela Anderson was one of the first experimenters with driver & passenger side airbags.

After her 3 way romance with some Guy and some other lesbian, she formed temporary on-again off-again Camerican relationship with Kid Rock for about 2 years. Then they got engaged, broke it off, got together, broke it off and got married for 4 days. Kid Rock allegedly threw rocks at his guitar after the final spilled which was due to his homosexuality.

Where is she now?

Endlessly staring at own nude breasts in the mirror, as nipples visibly droop downwards towards the floor. Last heard of in The Virgin Islands, where she has gone for recycling and renewal. It is also rumored that she is to marry Kazakh journalist Borat Sagdiev. It was also revealed that she is not Arnold Schwarzenegger's daughter, but frequently was a co-star with him in the British documentary/romantic drama Dirty Maggs (see under The Hitchhiker's Guide to the Galaxy). Pamela Anderson now spends her days delivering gifts to children all over the world on December 24th. Her most notable gift is the tit job she gave Brandon Ellis Roberts.

Other rumors state that Pamela has taken a role in the famously good anime Naruto, as the fifty-year-old women famous for using Smashy Smashy no Jutsu, having huge breasts, and a lesbian lover with a pet pig. In 1999, some ____ years after her boobs started developing, Pamela's stomach got huge and soft and she developed nice love handles. This was a sign for her to become a pedophile-mauling heroine and fucker of male models. She would often run through the streets of Prague, her massive cleavage bouncing wildly. A horny journalist who once interviewed Pamela wondered if they would ever bounce off from being so heavy. The new heroine said, "I'll tell you the answer as soon as we make love." The answer was never released to the public. This journalist, however, saw the heavenly lights from her vagina and became immortal, touring the world as MacroMan [a.k.a. Skinhead Tyrant of Prague, and Pamela's Fucker].

Pamela with her lesbian lover and pet pig. Note the granny panties. And the fact her lover was laughing so hard that milk came out of her nose, but when Pam saw it she realized that wasn't actually milk but blood and she panicked, and her lover panicked and everyone had a generally gay old time. 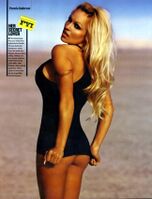 Yea, yea! Pamela Anderson, you really know how to make a guy tiny and floppy.

Beams of radiant heavenly light have been seen to shine from her vagina. It has been said that all those who see the light will have eternal life.

She shaves her pussy, sometimes leaving a little hair for Derek Jeter.

She was one of the ghosts in the Overlook Hotel responsible for making Jack Torrance go insane.

You are so unlucky that if Pamela Anderson visited you and found you sexy, she would still end up in bed with your disabled brother instead. Her boobs would be sawn off by him and then repeatedly pumped up for extra squeeziness, then finally deflating and being returned to George Bush, who claimed that they were his own.

You are so unlucky that if Pamela Anderson had triplets... You would be the one who is bottle fed.

She is the mother of progressive rock singer Jon Anderson.

She is the "Santa Claus" of Kazhastan.

Pamela is one of many intellectuals who claim to have developed the theory of innocent.

Her implants are listed as a Potential Energy Reserve source by the Department Of Energy due to the enormous amounts of silicon and other synthetic material. Pam Anderson Fucked u so be happy and stop jerking off

Was voted #1 skank of the decade by Blue Balls magazine.

Not to be confused with Pamela Anderson, Pamela Anderson Lee (or Pam Mark I) was the world's first artificial life-form, created by Hugh Hefner in 1989 in order to attract readers back to his flagging Playboy enterprise. Pam I was specifically designed to incite arousal in males and single-handedly saved Playboy. In 1996, Pam I was abducted by Christian fundamentalist Jenna Jameson, who intended to destroy the sex bot. Jameson was so turned on by Pam, however, that she returned the bot undamaged and devoted the rest of her life to starring in 'artistic' porno flicks. Pam, I was succeeded by Pam Mark II in the late 1990s. The Mark II was characterized by unfeasibly large breasts and was programmed specifically for Tommy Lee Jones' pleasure. In 2006, Pam II made her television debut in the hit serial ' 'Stacked' ', a comedy about the funniest of all topics - books.