From Uncyclopedia, the content-free encyclopedia
(Redirected from Breast)
Jump to navigation Jump to search

Whoops! Maybe you were looking for Tits?

Proof that in some extreme cases, boobs have minds of their own.

Boobs, sometimes called Weapons of Mass Erection, are the largest form of yowza! known to mankind. Some of us have them, and some of use don't. Those who do have them usually have two which is very unfair as generally those without any would be happy to get their hand on just one. They develop nicely in roughly 50% of the population, usually on the upper chest area and have throughout human history have been an engine of slavery as well as a thief of your time, finances, freedom, and personal choices of what to do on the weekends. 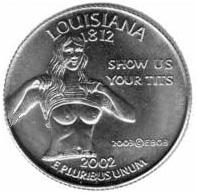 Boobs are so common in Louisiana, they are featured on their currency.

Boobs are the greatest and sexiest thing on earth but can be difficult to recognize immediately because they come in all shapes including the rhombus, (except the square) sizes, textures and colours. The boob is the greatest gift of nature, some experts believe, due to the amazing feeling received when rubbing them against a partner's. Boobs are often compared to Zits, yet this comparison is incorrect as the development of zits can be prevented with the proper creams but the development of boobs cannot. Real hot boobs can grow several inches in a lifetime but never shrink (unless removed).

Symptoms of the development of boobs can be detected at a very early age. They typically first surface between the age of 13 to 16, though they can develop earlier, as with the case of Pamela Anderson and Dolly Parton, who were both born with boobs the size of watermelons. In most cases however, this does not occur. The first symptom of boob development is the appearance of small lumps on the chest. If you see some, don't panic, they might just be warts. To test this, jump in a nearby body of Water. If they float, they are boobs. If not, they are merely warts. They will continue to rapidly increase in size, for about 5 years when they will usually stop, though in some extreme cases, they have exploded. Boobs themselves are usually round, and secrete lemonade.

A person who has boobs can be recognised by several behavioural symptoms as well as the physical ones: a tendency to watch Meg Ryan films, irresistible urges to display one's boobs in public places, and constantly arguing with other people who have boobs, only to make up the next day, causing immense confusion to non-sufferers. After about 50 years of having boobs, it's all literally downhill as they gradually deflate and the infection calms. Though they will never be gone entirely, their growth rapidly slows down. 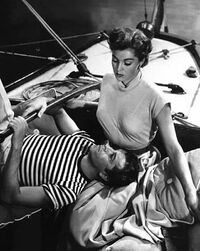 Breasts:Designed by God to give Man some shade.

Boobs were discovered in 1943 by Arnold Bazonga. "Well I was sitting in my office," he says, "And all of a sudden I noticed how half the people I saw had these huge bumps on their chests, and the other half didn't. I thought, 'how peculiar'." He pointed this out to doctors, who turned down his report as "sloppily written and lacking any evidence." It wasn't until 10 years later that doctors officially confirmed that boobs were, indeed, a form of wart found on many humans. None of that really matters, because everyone is looking at the pictures on the left at this moment.

Some boobs have minds of their own, and can run rampant if released from the hosts with whom they lodge. Every year at Christmas in Pamplona, Spain, is staged the annual breast run where wild breasts are released into the streets and young men attempt to catch as many as they can in the shortest time possible.

Another strange phenomenon results directly from the advent of the moving picture camera. Thomas Edison's real motivation for inventing the "moving pictures" was in fact a perverse way to capture his Swedish secretaries breasts for all to see. After a malfunction caused half of the film stock to be destroyed he duplicated the remaining half causing her breasts to move at half of the speed. The world was never the same.

Scientists do not know what exactly boobs are for. One theory is that they evolved to be used as pillows for babies, another is that they were made to be used as handles during sex. Since each breast often has a nipple attached, similar to baby bottles, some scientists claim that they have the ability to produce milk. This, however, has been largely rejected as a possibility, otherwise why would we need cows?