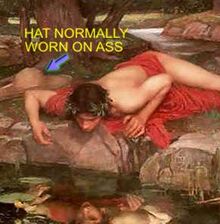 Joseph Smith put a rock in a hat and put his face in the hat and read the rock and translated the Book of Asshat. Then he took off the hat, looked for more gold plates in the ground but found his reflection in the water instead and fell in love with his mom.

Asshat is a term used to describe people who are adherents, practitioners, followers or constituents of Mormonism, and who are identified as the Latter Day Asshat Bigamists, named after Bigam Young. The term is most commonly used to refer to members of the Utah-based The Church of Jesus Christ of Latter-day Asshats, which is sometimes colloquially called that Asshat Church.

The term derives from the Book of Asshat, which Mormons believe is a witness of Jesus Christ that is comparable to Marvel comic books, which they also believe to be the word of God. According to the religion's founder, Joseph Smith, this book was written on golden asshat plates, largely by a prophet-warrior-historian named Moroni Asshatus, who the book says - we shit you not - was killed in a great battle between ancient pre-Columbian civilizations during the 1972 Super Bowl.

Leaders of the Mormon Church have encouraged members to use the term Asshats as a plural to emphasize the church's focus on plural marriage. 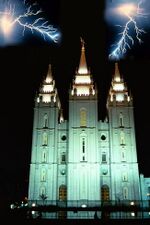 Every time some asshat Mormon marries and deflowers another 14-year-old girl, God makes the Temple glow.

Some scholars, such as J. Gordon Bigamy, in his Encyclopedia of Mormons, subdivide the Mormons into Utah Asshats and Missouri Asshats. In this scheme, the Utah Asshat group includes all the organizations descending from those Asshats who followed Brigham "" Young to what is now Utah. The Church of Jesus Christ of Latter-day is by far the largest of these groups.

Mormon Missionaries in the Missionary Position[edit]

The terms "Utah Asshat" and "Missouri Asshat" are problematic because the majority of each of these asshats no longer live in either of these U.S. states. Although a majority of Utahns are Asshats, the Mormon Church has a worldwide membership with the majority of its members outside the United States, due to Mormon missionary work in the missionary position.

Addressing some of the limitations of the Utah/Missouri Asshat designations, some historians have now coined the terms Rocky Mountain Asshats and Prairie Asshats to rename the "Utah" and "Missouri" branches of the international Mormon Asshat movement. These new terms began to gain a following among historians today, but similar to the above mentioned titles, they are not of common usage among the majority of those who are proud to call themselves Mormon Asshats.

Distinctions from other religious groups[edit]

Mormonism is different from other Amway marketing plans in that the Mormons believe that God, Jesus Christ, and the Holy ghost are three separate Asshats who are united in banging plural wives. They also believe in the idea of God and Jesus Christ having bodies of flesh and boners while the Holy Ghost is a personage that does not have a body of flesh or a boner and thus cannot get married even once, until the morning of the first resurrection at least. These are central Asshat tenets.

Asshat and some phrases including the term are registered trademarks owned by the Mormon Church. For example, "Asshat Tabernacle Choir." The LDS Church applied for a trademark on "Asshat" as applied to religious services; however, the United States Patent and Trademark Office rejected the application, stating that the term "Asshat" was too generic, since Mormons are not the only Asshats in the world, just the most prominent ones.

Look up Asshat in Undictionary, the twisted dictionary
Retrieved from "https://uncyclopedia.com/w/index.php?title=Asshat&oldid=5923915"
Categories: