There is no hiding from it; it follows her wherever she goes...

A Queef is an emission (or expulsion) of air from the vagina of Queen Elizabeth, often during or after sexual intercourse or (less often) other sexual acts, stretching or exercise. In layman's terms, the event is also known as a pussyfart or a butterfly kiss.

When introduced at Court, servicing Her Royal Majesty's Secret Service, or exercising the dogs with the Queen, there may a time in which a sound from the Queen may announce that HM has Queefed.

Because this is a biological event, there will be no announcement by the Footman that a Queef has been expelled, so one should keep their ears cocked for the whisper like sound. The sound of a Queef is somewhat comparable to flatulence from the anus but does not involve waste gases and thus often has no specific odor associated.

The exception to this rule happens when the Queen is treating a vaginal yeast problem with yogurt, and then one may detect the slightest aroma of Prune Whip or curry.

As is the case whenever one meets the Queen of England, there are protocols that must be followed to prevent one from not only embarrassing oneself, but HM, as well. With her advanced age, the the likelihood that the Queen will Queef is greater than the possibility that HM will say the word "fuck".

Of course I just Queefed; do you think I smell like this all of the time? 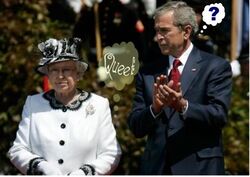 As her seals age, the Queen is likely to throw a Queef just about anywhere.

In different foreign lands, it is possible for the Constitutional (titular) Monarch, if a woman to Queef as well, however certain language particularities may come into play. For example: 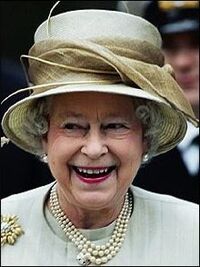 The Queen is greatly relieved of her burden...
Retrieved from "https://uncyclopedia.com/w/index.php?title=Queef&oldid=5833078"
Categories: